Intersectionality Has Associated the Women’s March With Anti-Semitism

What can happen if you’re only concerned about anti-Semitism on the Right. 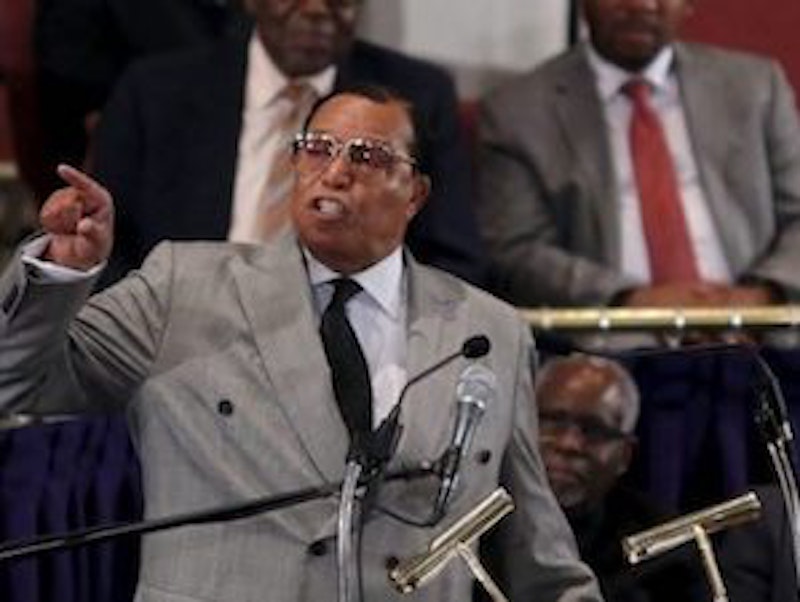 The Women’s March has been tainted by its leadership from day one, as I wrote nearly two years ago, but only recently have some within the movement come to this realization. In November, Linda Shook, founder of the Women’s March, urged the activist group’s board members—Mari Lynn “Bob” Bland, Tamika Mallory, Linda Sarsour and Carmen Perez—to resign. Their leadership, she said, has “steered the movement away from its true course.” Shook cited the steady stream of criticism directed at the Women's March for its connections with anti-Semitism. Actress Alyssa Milano, a longtime supporter of the movement, said she wouldn’t speak at the next Women's March, as she has previously. Shook has also announced that she won’t be speaking at the upcoming anniversary event for the Women's March.

Shook singled out Mallory, Perez, and Sarsour for rebuke, claiming they’ve refused to separate themselves from groups espousing racist beliefs—specifically mentioning Nation of Islam leader Louis Farrakhan. Muslim activist Sarsour, the most prominent of the three, has been a fan of Jew-hater Farrakhan for years, and a proponent of sharia law, under which women who’ve been raped are often jailed for having illicit sex.

Sarsour refutes claims of anti-Semitism even though she’s also attended events featuring Farrakhan. When Tamika Mallory was attacked for boasting of participating in an event Farrakhan spoke at (sample quote: ”White folks are going down. And Satan is going down. And Farrakhan, by God’s grace, has pulled the cover off of that Satanic Jew.”), Sarsour vigorously defended her. Mallory has questioned the criticism she’s received for attending the Nation of Islam's annual Saviour's Day event, claiming that her track record is sufficient evidence of her opposition to anti-Semitism, but she’s cast serious doubt on that assertion by praising Farrakhan a number of times. She once posted on Instagram that the hate preacher was the “GOAT”—greatest of all time.

In response to Shook’s comments, the Women's March released a half-hearted statement declaring, “Minister Farrakhan’s statements about Jewish, queer, and trans people are not aligned with the Women’s March Unity Principles.” The leadership, reflecting a general tendency on the Left, couldn’t condemn the person who’s compared Jews to termites and said the “white people running Mexico are Mexican-Jews.” Carmen Perez, speaking about Farrakhan, once said, “There are no perfect leaders,” even though she and her co-leaders would be all over anyone exhibiting even a hint of what they see as “Islamophobia.”

Daughter of blues legend Muddy Waters, Mercy Morganfield, who once ran Women’s March D.C., has accused the four Women's March leaders of providing “zero accountability” on the group’s massive fundraising while staying in five-star hotels with a “glam squad” of family and friends, and a Nation of Islam security detail. Morganfield says she’s repeatedly condemned Mallory’s “anti-Semitic rhetoric in public and private,” only to be “shushed by Bob Bland.” Bland has publicly stated that white people are complicit in white supremacy because of the benefits they receive from white privilege, so they should let people of color take the lead in the struggle.

The leadership of the Women's March, which isn’t demographically representative of the American population, is a product of the intersectionality ethos the Left and the Democratic Party have fallen for, under which people are awarded victimhood points. Mallory’s black and a woman, so she gets two points. Perez is a Hispanic woman and Sarsour’s a Muslim woman, so they each get two points as well. Bland’s just a white woman, so she’s only awarded one point. In effect, she’s a junior member of the Women's March leadership panel. You could say she’s the token white person on the team, put there to rubber stamp the actions of her superiors.

Under the tenets of the intersectionality religion, minorities are empowered at the expense of the majority, which is expected to just listen. This is what motivated Elizabeth Warren to go for an extra victimhood point by taking her disastrous DNA test. Why she went ahead and announced the results is anyone’s guess. Linda Sarsour’s a canny faux feminist who attained her leadership position merely because of her “two-pointer” status—she worked the system. Without the structurally-flawed intersectionality framework in place, the chances that three out of the four Women’s March leaders would be supporters of a prominent worldwide racial conspiracy theorist are about nil.

The media’s continued to adhere to its double standard (with the exception of Jake Tapper) by mostly shying away from Farrakhan’s racist eruptions and the Women's March’s association with him. If you doubt there’s a double standard, try to imagine the media meltdown if a prominent conservative leader attended events sponsored by alt-right icon Richard Spencer or said that Ku Klux Klansman David Duke was the GOAT. Spencer doesn’t like Jews either, but his rhetoric about them doesn't even approach the vileness of Farrakhan's.

Tamika Mallory has tried to explain her affinity for Farrakhan by saying, “the black community’s complex.” That’s not enough when you’re in the leadership position she’s in—she’s not supposed to be representing just black women. If you’re going to be on a political side that routinely denounces opposition figures who associate with the wrong people, then you have to keep your own house clean. Because no upfront due diligence was done on Sarsour, Mallory, and Perez, the Women’s March house was soiled from the outset.

Under the dynamics of intersectionality, Farrakhan’s a black person (i.e. victim) who hates Jews (white and powerful), so it’s no big deal. But most Americans aren’t willing to make such a calculation to excuse anti-Semitism, which has now become so widespread in Europe that Jews are moving out of certain countries for their physical safety. Now that modern feminism’s been tainted by the Women’s March scandal, it’d be a good time for the Democratic Party to do some self-reflection on the damage intersectionality causes.