The Futility of the Walled Facing the Un-Walled 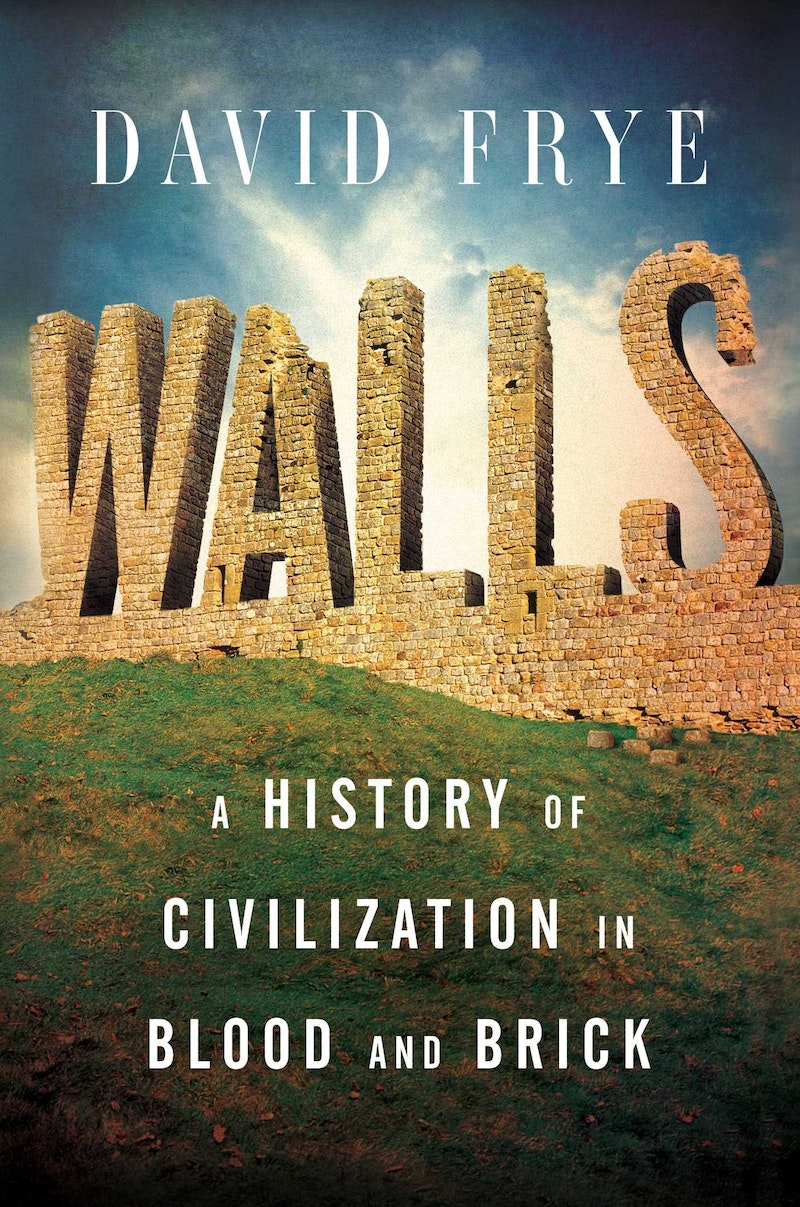 It’s true, that old line: when you have a hammer, the world looks like a nail. It’s sometimes most true when you have a clever idea about the nature of history; a single shining theory that explains the whole course of human existence through the ages is one hell of a hammer. The question, then, is whether history is made up of nothing but nails.

This brings me to David Frye’s recent book Walls. It’s a big-picture book of history, brief—less than 250 pages, excluding footnotes—but ambitious. Frye lays out a way of thinking about the world, structured around a single invention that (to him) marked a basic change in human existence. That invention’s the wall, not as an element of architecture or as a way of fortifying a specific fortress, but as a defensive curtain around cities or across long distances of terrain; like Hadrian’s Wall, or the Great Wall of China. For Frye, this use of the wall defined two kinds of people: those outside the walls, who had no protection from each other and lived in a world of all against all; and those inside the walls, who had shelter from aggression and so could develop art and culture. It’s both an intriguing and appalling notion.

The book’s written in a brisk pop style, sometimes too aggressively un-academic. There’s a reference to “the crude bling of the barbarians,” for example, while Beowulf’s described as a “grasping old bastard.” If that feels forced, at least you can see what Frye’s doing and how he’s positioning his book.

It’s a book that’s consumed with looking at walls across Eurasia, particularly central Asia. There’s a brief chapter on the Americas, little or nothing on Africa beyond ancient Egypt, on Oceania, on India. There’s little in the way of footnotes, which is a problem. A history on the scale Frye envisions, told in so few pages, necessarily involves sweeping generalizations. For example, I was skeptical of his assertion that in all societies outside walls “every male was born to the warrior’s life” and that due to “the warrior’s disdain for what he perceived as ‘women’s work’” women were forced to “concentrate solely on domestic and agricultural chores.”

Those are sweeping statements made about the role of work, the perception of work, what is valued by whom, and how gender roles relate to all the foregoing; and the context suggests that Frye means this assertion to hold true globally and at all times, in every un-walled society around the world. But there’s nothing in the notes telling me where he got this generalization from, or what data backs it up.

The same paragraph speaks of a “dearth of cultural productivity that has generally struck civilized societies as ‘primitive,’” which opens another can of worms. Or series of cans; to start with, questions such as what is to be understood by “civilized,” what by “primitive,” and how the two are in opposition to each other. But let’s look also at the idea that un-walled or “primitive” societies have a “dearth of cultural productivity.” Frye’s already established that Beowulf and other Old English poetry comes out of an un-walled society. So did the poems of Homer. Notable, as Frye likes to contrast walled poets with un-walled warriors; so he speaks of Goths coming to sack Rome undeterred by “a community of poets and politicians” rather than, say, merchants and blacksmiths. He has a specific idea about what walled life means, in contrast to un-walled life, and too often this slips into the cartoonish.

It’s sometimes worse than cartoonish. There’s a longstanding racist discourse in which indigenous cultures are dismissed as primitive or “savage” (Frye quotes French explorers in North America using the word “sauvages” and translates it as modern English “savages,” which is not necessarily accurate). Frye’s thesis runs the risk of playing into that discourse, and I’m not convinced the book avoids it.

He asserts, for example, that in key ways North American indigenous nations “were hardly different at all” from each other (in that they were un-walled societies). A couple of pages after that, after uncritically quoting two (White) 19th-century sources, he gives a selection of customs from various nations across the continent as “corroboration” that indigenous societies had specifically warlike customs. Of course that’s easy to prove; every society on earth has war-like elements. It’s no good saying “girls would humiliate young men who had shown cowardice” as if that’s something unique to indigenous North Americans when, for example, British women in World War I went around handing out white feathers to men who hadn’t enlisted.

Frye repeatedly tells a story in which a society that builds protective walls huddles behind those walls in fear of the warrior societies outside. For Frye, walls inevitably breed weakness, and indeed feminization; he approvingly quotes the Spartans to this effect repeatedly. He argues that sooner or later the walled societies fall to the barbarians beyond the walls, as the walls allow for sophisticated culture to thrive but also lead to an enfeebling of the walled population.

Put like that you can see the problem. Given long enough, any society will fall. It doesn’t matter to Frye that the Romans started building walls in the 4th century BC and had their Empire tumble down in the 5th century AD; for Frye, it shows the futility of the walled facing the un-walled. The technology and tactics that go along with civilization don’t count for much.

Frye waxes rhapsodic on the toughness of the un-walled, on the virtues of Spartans and Mongols and Huns. One might say he accepts their perspective on history uncritically. He maintains that Greeks outside of Sparta were weakened by their walls, which makes it odd that they were in high demand as mercenaries in the ancient world. Frye skips over the later advent of mercenaries in the Middle Ages as well, and indeed the whole process of the professionalization of warfare in the modern world.

There are a number of omissions and exaggerations and bad arguments in this book, all deployed in one direction: exalting the alleged masculine virtues of extramural barbarian warriors. Frye admits his sympathy for the un-walled late in the book, remembering being thrilled by a screening of the original King Kong: “Nine years old and we already knew that we were supposed to root for the primitive over the civilized.” I can’t fault his taste in movies, but it’s an odd passage. He goes on to state that with the romantic exaltation of the un-walled “we have arrived at that point where the protagonists begin to remind us of ourselves.” That’s a strange admission for a historian to make four-fifths of the way through a book; one would hope the common humanity of their subjects would seem familiar all the way through.

At any rate, after this the book deals with the 20th century, and views walls a little differently, as a way of shaping population migrations as well as fortifications in war. This is one of the better parts of the book, filled with interesting anecdotes and intriguing, precise facts used well. Most of the best moments in the book are along similar lines: moments of storytelling, as Frye recounts one military campaign or another. And there are some interesting ideas in Walls; there’s an intriguing focus on Central Asia, for example, home to so many notorious barbarians.

In the end, though, the book feels more like the outline of a myth than a coherent work of history. Frye has one story that means something to him, and he tells it over and over again. I think it’s been done before, better, and without the cloak of history over it. Robert E. Howard ended his short story “Beyond the Black River” by having a character sum up Howard’s worldview: “Barbarism is the natural state of mankind… Civilization is unnatural. It is a whim of circumstance. And barbarism must always ultimately triumph.” Walls never reaches that epigrammatic height. My recommendation is to pass it by, and pick up a collection of Howard’s fiction.