Why I’m an Anti-Authoritarian

The origin of political authority is sexual masochism. 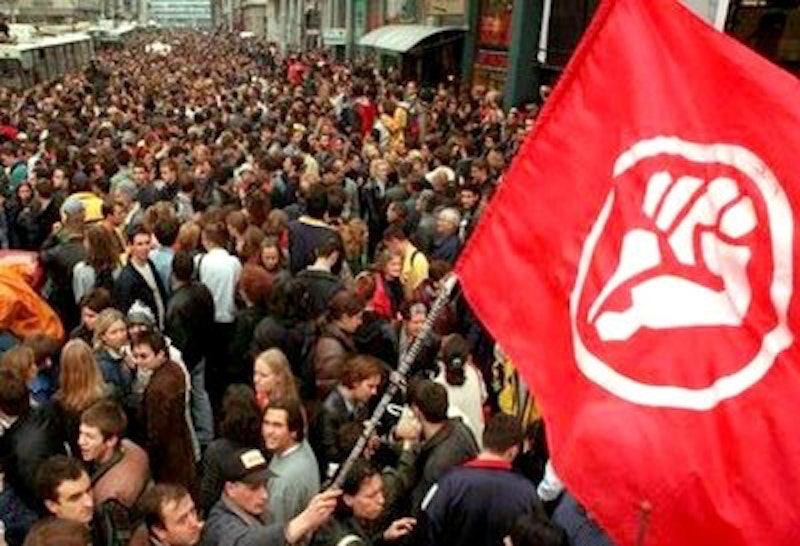 The last of a three-part series: the first two are here and here.

Back when I came out, I might not have realized how people hear the word “anarchist.” Many—starting with my Mom when I was 13—have urged me to use another term for my political position; while “my son the lawyer” has a nice ring, “my son the anarchist” takes some explaining. (Later on, my kids might have struggled a bit with “my Dad the anarchist”). Then as now, I often go with “anti-authoritarian,” which also denotes the biographical origin or visceral source of the politics. Perhaps you regard your own politics as emerging, not from a set of emotional reactions or social pressures but from careful rational examination of the facts. Just kidding. No one could be that self-deluded.

I started, very early, with a reflexive loathing for power of almost any sort, especially when it was being exercised over me, and a resolution to try to fuck it up real good. I’m not sure exactly where it originated, and here or there people have hinted that it is more a pathology than a political position, much less a practical program. Were I now the kid I was in 1973—when I more or less overthrew my Junior High School in DC—I would be diagnosed with ODD: “oppositional defiant disorder.” So maybe, if psychologists are right about mental conditions (which seems unlikely), my political ideology can be attributed to brain chemistry.

At least I don’t suffer instead from Morbid Capitulation Syndrome, which has reached epidemic proportions. (I’m still looking for a name of the disease that makes for a better acronym.) Sufferers stumble around their whole lives like the walking dead, looking for someone to tell them what to believe, someone who can force everyone to behave as they ought. The origin of political authority is sexual masochism. I prefer my own groovy rebel mental illness to that sort of groveling need for subordination and simulated unanimity.

Perhaps, that is, everyone’s political position is pathological or the result of childhood trauma. It doesn’t follow that they’re false, and perhaps some alleged illnesses are sources of insight, even as others trap you in delusion. I prefer the pathologies that resist domination to those that yearn toward it. The left-right spectrum stretches from Mao to Pinochet, from authoritarianism to authoritarianism. In between, there’s authoritarianism. One could consider it as a single ideology, and it’s designed to trap you or convince you that the only relevant question is to whom you will knuckle under.

Though people purport to think that the spectrum is eternal, it originated in Europe at the time of the French Revolution. It didn’t take its modern shape until the era of full-blown industrial capitalism and the Marxist ideology that arose against it. The conceptuality was not current in the US until the 1880s, and insofar as it has ever been anything but a fiction, the left-right spectrum is still responding to the political economy of the late-19th century. There have been many other structures for understanding political positions over the centuries, and many political identities that don’t fall anywhere on the spectrum. In defining my own politics, I keep returning to moments before and outside the left-right trap.

Perhaps I shouldn’t whine about leftists and rightists being stuck at 1890, because my political philosophy is stuck in 1840. My heroes are American anti-authoritarians like Henry David Thoreau, William Lloyd Garrison, Josiah Warren, Lucretia Mott, Nathaniel Peabody Rogers, and Voltairine De Cleyre. Really, if you want to know my politics, you might review Thoreau’s Civil Disobedience. The basic ideas come from the movement to abolish slavery, and from certain kinds of Protestant Christianity, especially Quakerism and Unitarianism, though the political positions were quickly secularized. All of these figures, to begin with, are radical individualists.

They begin with the idea that no person can own another, because each person is of infinite, and equal, value. Warren calls this “self-sovereignty,” and it’s the driving force behind the first-wave American feminism of Mott, Sarah Grimké, Elizabeth Cady Stanton, and Margaret Fuller. Men can’t own women. White people can’t own black people. Capitalists can’t own workers. On this basis, they rejected every form of human domination. Nathaniel Rogers—an abolitionist newspaper writer from New Hampshire and perhaps the most thoroughly radical American, or person, of his period—described the goal as “an anti-slavery society.”

Now, when a contemporary leftist hears “individualism,” all he/she hears is “capitalism.” But American individualists of this variety were the most radical American critics of rising capitalism, as of every form of domination, from the 1820s to the 1860s. They were feminists, anti-racists, and peace activists. Most of them (not Thoreau, though) were “absolute non-resistants,” and were demonstrably influential on later pacifists such as Tolstoy, Gandhi, and King. A number of them advocated animal rights, and cherished the natural world in ways that anticipated the environmental movement.

They were fundamentalists for free speech, not for the sake of a free market, but because they believed that no person had the right or the wisdom to control another person’s mouth, and because the individual conscience is sacred. Every consensus, they argued, was likely to be oppressive, insincere, and false, and every dominant opinion ought to and does produce dissenters, and tries to enforce itself by silencing them. “If it be not safe to entrust the self-government of speech to mankind,” wrote Rogers, “there had better not be any mankind. The world had better go unpeopled than inhabited by vassals.”

All of these people were opposed to the existence of the political state. They noticed that governments rested on force and coercion. They noticed that governments made war and forced people to kill and die. They noticed that the government of their own time enforced slavery (in the Fugitive Slave Act, among many other things), denied women property and voting rights, rested on incarceration, was run by wealthy, violent white men for their own benefit, and was engaged in a genocide against American Indians. But whatever its policies at a given moment, it rested on the unjustifiable power of some people over others based on violence, a sort of power no one could justly claim or rationally be trusted with. “Call no man master,” said Lucretia Mott in 1852, crystallizing the whole train of thought.

One thing about this set of positions: it’s completely consistent. Another: it cannot possibly be placed on the left-right spectrum, which is plenty to refute it as a way of categorizing political possibilities. But then again, the spectrum makes gobbledygook out of all American politics through the 19th century. The question of whether Jefferson or Hamilton were on the right or the left is completely ill-formed, and good luck with the Democrat-Republicans, the Whigs, and the Know-Nothings.

Since eighth grade, I’ve become more peaceful; my politics (my spirituality too) are those of Lucretia Mott. Does this provide a practical program for the 2020 election? Hardly. Are we liable to end up in a few decades in a stateless paradise (or for that matter a stateless nightmare)? Not really. I see the trend continuing in which Gina Haspel is reading your emails, and drone-striking or waterboarding our alleged collective enemies. But the basic positions remain, compelling in their vision of a liberation for each and hence all of us. The way I try to apply them now is to pursue any policy and to provisionally support any politician or movement which or who tends to dismantle the machinery of authority and violence, who wants to shrink the coercive state, seems to have some respect for individual autonomy, for conscience, for liberty, for the value of each of us.

Meantime, my five-year plan is to keep snickering at and in small ways undermining authority, as well as the sorts of politics and people, on the left and on the right, who yearn for it.