Why Did Voters Elect Trump? 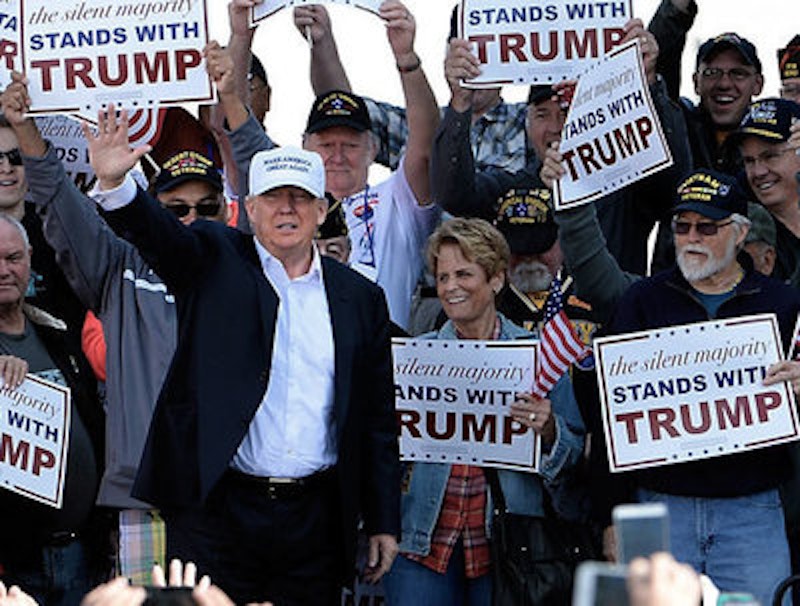 What do Trump voters want? Some are arguing that voters who cast ballots for Trump are angry about hard economic times. Others say voters are demanding racist policies as a backlash to the Obama years. People want jobs, they want an end to free trade, they want to hurt immigrants, and they want to put women in their place.

Christopher Achen and Larry Bartels in Democracy for Realists, published back in April, suggest a different possibility. Based on political science surveys, research, and statistical analysis of voting patterns, they argue that Trump voters didn't vote for any policy. In this they are like most voters. The public is broadly ignorant and indifferent to policy. Arguing that Trump voters voted against trade deals as some sort of rational overarching policy statement, for example, is ludicrous. Even highly informed voters can't intelligently discuss the complicated effects of trade deals.

Most pundits and political scientists will admit this, if pressed.  So they argue that rather than voting for policies, people vote based on a general sense of their well-being. Voters may not understand trade policy, but they know whether they have jobs, and can vote accordingly. Theoretically.

In fact, according to Achen and Bartels, voters are about as bad at evaluating general well-being as evaluating policy. Voters don't evaluate presidential performance on the economy over the course of four years. They tend to react just to what’s going on right now. So, when incomes fall in the period just before an election (which didn't happen in a systematic way in 2016), voters will punish incumbents. But they also punish incumbents for bad weather or, in a dramatic case in New Jersey in 1916, for shark attacks. Voters are bad at evaluating long-term economic well-being, and worse at figuring out who’s to blame for their misery. Seeing an election in which Clinton narrowly won more votes as a rebuke to Democratic economic policies is simply insupportable—and I say that as someone who’d prefer that the Democrats pursue a much more redistributive economic policy.

So, if Americans don't vote on policy, or coherently on "how things are," what determines their vote? The answer, according to Achen and Bartels, is identity. People vote for politicians who are broadly "like them," or whom voters perceive as being on their side. Catholics voted overwhelming for JFK, just as black people voted overwhelmingly for Obama.

The most important identity in politics, though, is partisanship. Republicans vote for Republicans; Democrats vote for Democrats. In fact, partisanship is so strong that it changes people's lightly-held policy preferences, and even their lightly held grip on facts. Democrats were far less likely than Republicans to believe that inflation fell under Reagan, even though it did; Republicans, similarly, tended not to believe that the budget deficit fell under Clinton. Republican voters did not move the GOP towards pro-life positions; rather, when the GOP hardened its stance on pro-life, its voters did the same—especially men, who had less of a stake in the policies. (The same is true for Democratic voters and pro-choice positions.)

In terms of Trump voters, it's worth pointing out that the ignorance and flexibility on policy is also true of racial positions. The great realignment of Southern Democrats to Republicans was driven more by Southern white identity than by support for racist policies per se. Even white people who supported civil rights legislation in the South switched from Democrats to Republicans.

Saying that Trump voters don't necessarily support racism outright, though, is not exactly a cause for comfort. As the authors point out, most Nazi voters didn't support Hitler's anti-Semitism either. Hitler won votes because he was a German nationalist. People felt he was one of them, and so they were willing to support his policies.

To say Hitler's voters weren't racist, then, misses the point. Because people focus on identity rather than policy, leaders have a great deal of leeway in shaping what policies define a particular identity. Voting for Hitler pushed anti-Semitism to the center of German nationalism. You didn't have to be a racist to vote for Hitler, but voting for Hitler made people more racist.

You could say the same for Trump voters. Trump worked hard throughout the campaign to define white identity via bigotry and exclusion—of Mexicans, Muslims, blacks, and Jews. Trump has gone a long way towards making hatred of non-white people a more central, more virulent part of Republican identity. How that new identity will be translated into policy is unclear. Since voters never care much about policy, Trump has broad latitude to translate hatred into action.