Hillary Clinton, the Philosophy of History, and You

Trump’s election, for some, was a collapse of a particular worldview. 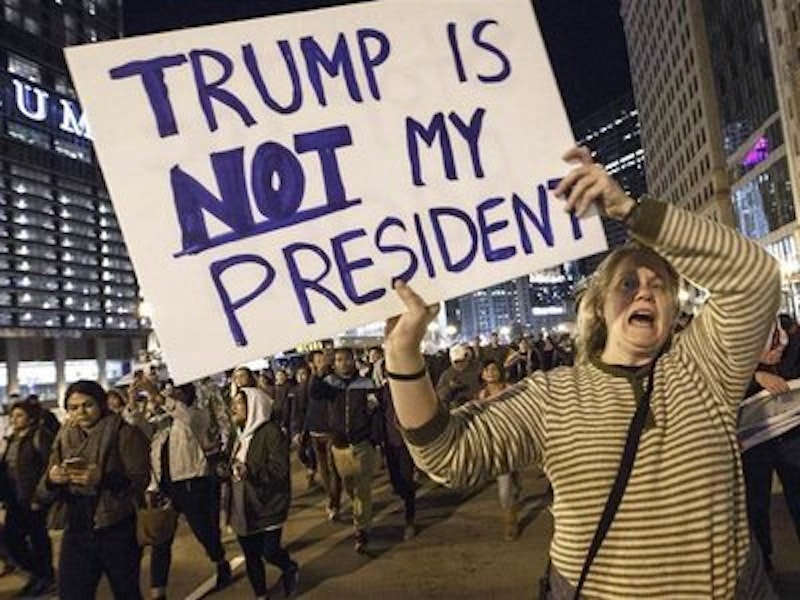 The response to Trump's victory/Hillary's defeat has been rather remarkable. People of a certain sort aren't just angry or disappointed; they’ve really gone a bit mad. The men seem enraged, in a singularly unimpressive way, and have promised or threatened to move off-planet. Women I know started circulating lists of things they’re doing to comfort themselves: a lot has to do with pets and yoga, as you might imagine.

What I want to focus on is not the pathetic wimpiness of such responses, but the reasons for them. I have a view about this, involving the philosophy of history. I think a lot of people in blue America have in their heads an entire structure for understanding all of human history and their own place within it, an informal theory of everything. This picture is enshrined in the term “progressivism,” and it is, roughly, the view that human history has the form of a narrative. It started somewhere, and it’s heading somewhere. And we know where it’s headed: a world much more equal, safe, and decent than our own.

The story of race and gender in the United States—the story in which we live out the true meaning of our creed with regard to each group—gets folded into that, and with it may come extreme personal investment: the story of history is the story of people like yourself, overcoming so many terrible barriers and playing a role as a woman, for example, in a much more decent future for everyone. The direction of history is the overcoming of oppression, by your own people. This feeling of onward march, with many people thinking about themselves as its marchers, as agents of history, descended upon us again very vividly with Barack Obama, who talked this way all the time as he rose to power

Improbably, Hillary became an emblem of this, especially for a lot of people who understood themselves to be rather like her. In the story of history, you need characters. Hegel had “history on horseback”—Napoleon—but we have gender and race firsts and exemplars: Martin Luther King, Obama, and… Hillary Clinton. Thwarting her, thus, is thwarting history itself. If you recognize anything like that line of reasoning in yourself, I think you need to reflect. No human being can actually be that sort of thing. Clinton is definitely ill-suited to the role.

Anyway, if that’s the story you’ve told yourself—if, explicitly or implicitly, you thought you understood history's goal and direction—the election of Donald Trump wasn't just a terribly unfortunate political oscillation or even a call to action: it seemed like the collapse of your worldview. The world moves left, not right, because right is the past and left is the future. Patriarchy will fade. White supremacy is something we left behind in the historical process, with a few rural pockets remaining.

On election night, such people's sense of what the world is and who they are within it was suddenly challenged fundamentally. That's why Robert DeNiro, for example, compared it to 9/11: not the day your side lost an election, but “the day the world changed,” etc. Indeed, on November 8th, the world changed a bit. But what really had to change was your self: your story. It was the same with a lot of Brits on Brexit: they started saying things like, “This is not my world. I can't live here anymore.”

The “meaning” of Brexit as a flowing-backwards of history entirely swamped any particular economic reality. Institutions can adapt, but it evidently cannot be assimilated to the mental economy of progressives. They started characterizing their opponents as the spawn of Satan, etc., just as here. They thrashed about through self-comforting behaviors. They started muttering affirmations.

History has no direction and no destination. To think otherwise is theological. You are definitely not going to get something like that out of evolution, for example. Since Hegel, or Aristotle, people have wanted to interpret human history as though it were driving somewhere or had some sort of point. It does not. I invite debate on that point, and assert that I can vindicate it against all comers, with some ease. In your dark heart of hearts, you know it very well yourself.

People who’ve thought this, from Marx to Hegel to Obama, have had all sorts of different accounts of where we are headed, or what the goal is. It's a world without classes, a world of service to the state, or a world absolute liberty. I’m telling you that anything might happen. Justice might flow down like a mighty stream. Or we might just snuff this sucker once and for all in a nuclear conflagration.

I don't doubt that you can work the wild-ass entrance of Trump into world history into your narrative somehow: even now, Marxists are adding more epicycles to late capitalism, and people are supplementing their little linear accounts with cycles or oscillations. But you really need to square up to reality, and this is as good a moment as any: as far as we can tell, it really is a crapshoot. We might be headed for an extreme period of religious fundamentalism, a recrudescence of fascism, or another centuries-long racial nightmare. Even if so, what happens next will be fundamentally new, and you won't actually be able to predict it very well. It’s very unlikely to happen to be whatever you wish for.

For that's the real problem with this rather loose line of thinking: it confuses what you wish history was with what it actually is: Hegel does that, Marx, and Ana Marie Newman too. I'm not sure that sitting home wishing, or telling stories, is the best way actually to realize any particular political goal or to understand the world in which you find yourself. All political goals are particular, contestable, and at stake.

And this election too shows the awful price of wishful thinking, story-telling as world-formation, and so on: reality swaggers up and grabs you by the pussy, even when everyone you know is telling the same story in the same words and you’re all so sure. Especially then.

If actual history is any indication, some people will make “progress” as defined by local standards and limited stretches of time and culture-bound goals. And events will go radically wrong in wars, pestilence, stupidity, and unforeseen catastrophe. And mostly, we'll just try to muddle through, not knowing very clearly even what we ultimately want, much less how to get it.

In other words, if your conception of history or yourself or your country was profoundly challenged by this election, it needed to be. It was pat, unreflective and simplistic. It made you passive: you were just sitting there, waiting for history or the federal government to liberate your gender, weren't you? The truth is, if you've got goals for history, you're going to have to try to think about them and clarify them and try to realize them in a genuinely contingent world.

Actually, I think it's a lot better to live in this beautiful and ferocious world than in our own stories, which are sketchy, repetitive, and flimsy compared to a physical universe we cannot control or know fully. If you think about what any given day in your actual life, or any given day in the world, is actually like, you'll see that this is no story. Face up, or move off-planet.