At least Chris Christie’s looks out of the picture. 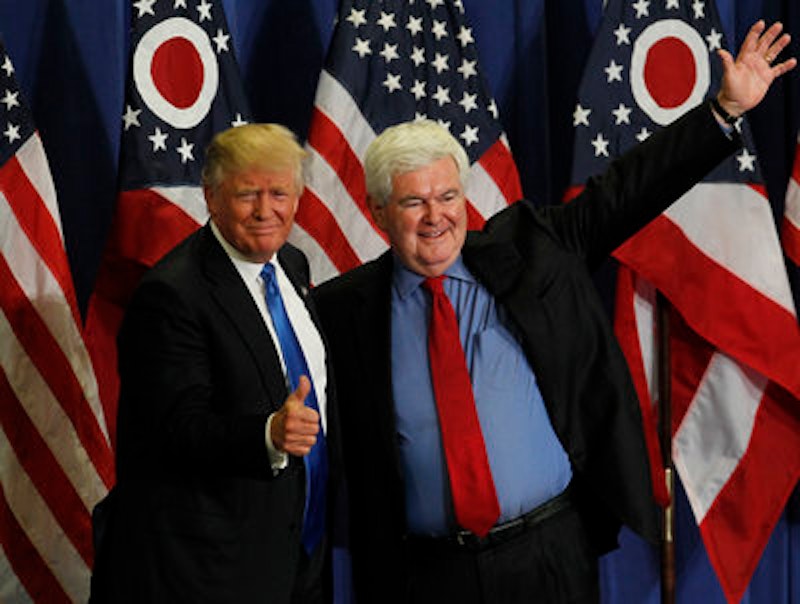 President-elect Donald Trump often says he has no time for losers. You’d think he’s surround himself, therefore, with the best that money can buy. But judging from the list of names dribbling out that might populate a Trump Administration, he’ll surround himself with losers and second-tier personalities who’ve been on the outside sniffing the margins of power and politics.

They’re among the thousands of appointments Trump will make to flesh out his Administration—cabinet officials, White House staff, ambassadors, bureaucrats and other little known patronage jobs that come with the rewards of winning the presidency. These are the people who’ll run the government—and to one extent or another—the lives of every American for at least the next four years.

Usually there’s an entire government-in-exile waiting to reclaim the jurisdiction they left behind. That revolving door effect is no different this time around except that Trump is an outsider with little or no connection to previous administrations. His bona fides as a Republican are questionable because he’s been a Democrat, too. And he’s had little previous connection to politics except as a generous campaign donor. More to the point, no one really knows whether he has committed positions on issues or whether he’ll honor those that he espoused during the campaign or whether they were just shtick. Trump’s already begun to back away from several of his hard-line campaign positions.

Take, for example, the logorrheic duo of Newt Gingrich and Rudy Giuliani, two of Trump’s most aggressive attack dogs and defenders. Together with Trump, the three have nine wives among them, no exemplars of family values. Gingrich was booted out of Congress in disgrace and lost a primary race for the presidency. Giuliani, similarly, was rejected by voters for president. His zero-tolerance politics while mayor of New York have been thoroughly discredited, and during his years as mayor the city paid out more than $500 million in police brutality claims.

One of Trump’s first picks was Mike Pence, governor of Indiana. Trump rescued Pence from defeat and disaster. After the election’s outcome, it’s tough to say what might’ve happened to Pence, but it the preliminary line-up, Pence was in serious trouble in his home state and the reckoning then was that he would lose the governorship. On down the list, Reince Priebus was (and is) regarded as among the weakest and most feckless of recent Republican party chairmen, who was almost certain to lose his job if Democrats had won the White House. But Trump counts Priebus among those who will be rewarded for his loyalty with a prime administration job.

Chris Christie, governor of New Jersey, another losing presidential candidate, is a braggart like Trump. He had served as head of Trump’s transition team and, as a former prosecutor, is often mentioned for the Justice Department’s top job. Christie was smudged and smeared by the “Bridgegate” scandal when two former top aides testified that he knew of the George Washington Bridge closure as an act of political retaliation. Christie’s governance of New Jersey is another matter. He cut taxes and underfunded the state’s pension fund to the point where the state’s bond rating was downgraded three times. The finances of Atlantic City, where Trump’s casinos went into bankruptcy, were so depleted that they were recently taken over by the state.

And now, Christie has suffered another indignity. He was passed over for the vice presidency in favor of Pence. Christie has been bumped down to vice chairman of the transition committee he headed while Pence has succeeded him as chairman. Speculation is that much of this has to do with Christie, as a U.S. attorney, having indicted and prosecuted the father of Trump’s son in-law, Jared Kushner. And while he was at it, Trump named his children, and Kushner, to the transition committee. In the shakeup, Gingrich and Giuliani were also added to the transition team. (Which raises questions about conflicts of interest: Trump also named his children as administrators of the blind trust which will oversee his financial holdings. As members of the transition team, they will also help select the regulators who enforce the laws governing such dealings, including the IRS.)

And the hapless Corey Lewandowski is gone by not forgotten. Lewandowski was Trump’s original campaign manager (there have been three) and body man who was dumped for allegedly roughing up a female reporter. He moved on to CNN, with a $500,000 contract as a commentator, and is now on the list of recalls to serve in the Trump Administration.

John Bolton is a mean, nasty hawk. Bolton was one of the architects and principal cheerleaders of the war in Iraq during the administration of President George W. Bush. He’s mentioned for a top job in the State Department after sitting out the past eight years in a think tank, the American Enterprise Institute, tossing spitballs at President Obama. Bolton is also active in the NRA and a contributor to Fox News. Bolton was a Bush recess appointee as UN ambassador and resigned as the recess was about to expire.

Trump’s list of prospective Supreme Court nominees, and the incoming president could make as many as four, has little name recognition among the public but the names are praised among conservative legal scholars and think tanks for their general opposition to abortion and same-sex marriage. They include: Dianne S. Sykes, Steven M. Colloton, Raymond M. Kethledge, Allison H. Eid, David Stras, Thomas Rex Lee, don Willet, Raymond w. Gruender, William H. Prior Jr. and Joan Larson. Obama’s nomination of Garland Merrick is, for all practical purposes, dead.

There are other equally obscure names such as Steve Munchkin and Lew Eisenberg along with the familiar—Lt. Gen. Michael Flynn and Dr. Ben Carson, the failed presidential candidate who became a Trump ally and kind of the unofficial chaplain of the Trump campaign. And there’s Kellyanne Conway, Trump’s campaign manager, pollster and stabilizing influence, and Stephan Banning, the president of Breitbart, the conservative website, and Trump’s campaign chairman.

Nobody really knows what a Trump administration will look like. Until now, Trump has functioned as a one-man gang, going with his gut against all conventional political wisdom and advice. Unpredictability got him to the White House and there may be good reason to believe that he will not abandon that established habit now.

Associates describe Trump as a quick study with a short attention span. He rarely reads but assigns lengthy documents to aides to review and boil down to an essential sentence or two. It’s important to remember that Trump will replace one of the most cerebral presidents to ever occupy the White House. Barack Obama thrived on the thick briefing books that he devoured and often bragged that he knew more than the experts around him. Trump will likely discover in short order that the day-to-day presidency is more complicated and demanding than making deals on parking lot property or hawking the many products that bear his trademark.