Thomas Friedman Is Too Big to Fail

He’s not yet on board with Sulzberger Jr.’s minor mea culpa for Times coverage. 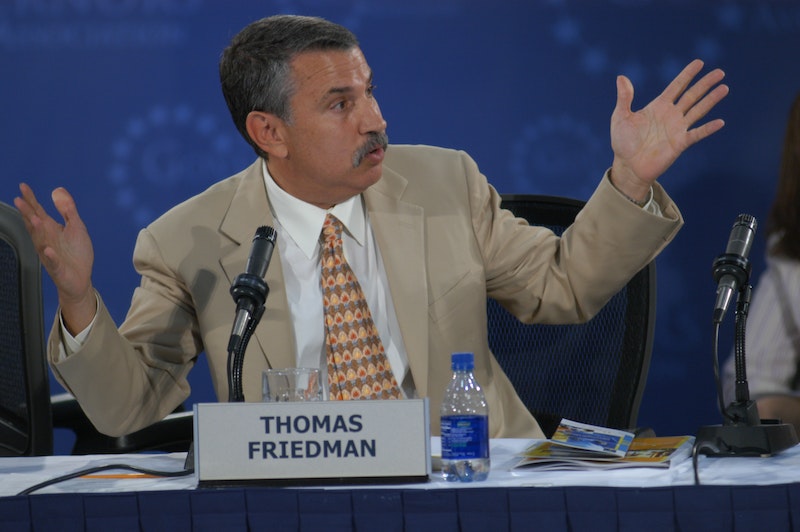 The past six days have been politically ugly, both sides can agree I hope, from the “Trump is a Fascist” protesters blocking highways because Hillary lost to the racist slogans and tags affixed to buildings from crazy Trump supporters. Yet I didn’t find anything more offensive than New York Times op-ed columnist Thomas Friedman’s grand proclamation last Friday night on Bill Maher’s Real Time that Trump’s victory was “a moral 9/11”… one that “we did to ourselves.” Never mind the presumptuous tone that all the supposed peons, those who aren’t multi-millionaires like Friedman, were plain stupid, but focus on the vile disrespect shown to those who perished on 9/11 and the grief that endures among their families. It takes a repulsive sort of myopia to say something so out of whack.

I ran into an old friend the other day, who almost always backs Republicans, but in this election was a Bret Stephens Never Trumper who couldn’t abide the incoherence, xenophobia, and perhaps anti-Semitism of the GOP candidate. We chatted for a bit, and he said, “he’d moved on,” and was willing to see what Trump would do. And then he told me a story about a friend who called him, mournfully, after the election, and said she and her husband were overcome with worry about their daughter. My friend, fearing an accident, a dire diagnosis from a doctor, asked for details, only to be told the teenage girl had been sobbing non-stop since Hillary lost. In Internet parlance, overreaction much?

On Sunday, the Times’ Frank Bruni was unusually humble about the new political reality (apparently he took publisher Arthur Sulzberger Jr.’s publisher letter to Times readers that promised the paper would emerge from its cocoon to heart) and struck a different mood than his columns in the election’s run-up. Bruni admitted that like-minded liberals like himself in the elite media had covered the election with blinkers on. Bruni wrote: “I worry about my and my colleagues’ culpability along these lines. I plan to use greater care in how I talk to and about Americans more culturally conservative than I am. That’s not a surrender of principle or passion. It’s a grown-up acknowledgement that we’re a messy, imperfect species.” He added that while conservatives uneasy with “marriage equality” aren’t necessarily “hateful boobs,” noting that five years ago President Obama and Clinton were of the same mind.

I don’t suspect the Times’ roster of columnists will adhere to this new sensitivity for long—I also find Trump’s appointment of Breitbart’s Steve Bannon as “chief strategist” disturbing and bet he’ll be out on his ear by June—but Bruni’s candor, and Sulzberger’s missive, are unprecedented in the modern era of the Times.

My old friend Taki (who wrote weekly for New York Press in the 1990s) was scathing on Saturday in his Spectator assessment of America’s media. Taki’s an odd but astute duck, and writing from London (where he spends part of the year), said: “And now a word about the fourth estate. I knew the fix was in long ago—never have the media been as incapable of separating fact from fiction and truth be damned—but when Vogue came out slamming Trump, I almost pissed in my St. Laurent silk underwear. Never before have so many news outlets abandoned all pretense of fairness in reporting an election. Never before have newspapers—with the exception of the New York Times, which always mixes reporting news with editorializing—allowed reporters to express their own opinions in so-called news stories.”

I’ve a hunch that Taki was just about to lampoon Lena Dunham (who retracted her promise to flee America), but either he was out of space or just too disgusted to continue.