Who Is Mystery Man Steve Bannon?

Ethno-nationalists of the U.S. and Europe will now have a friend in the White House. 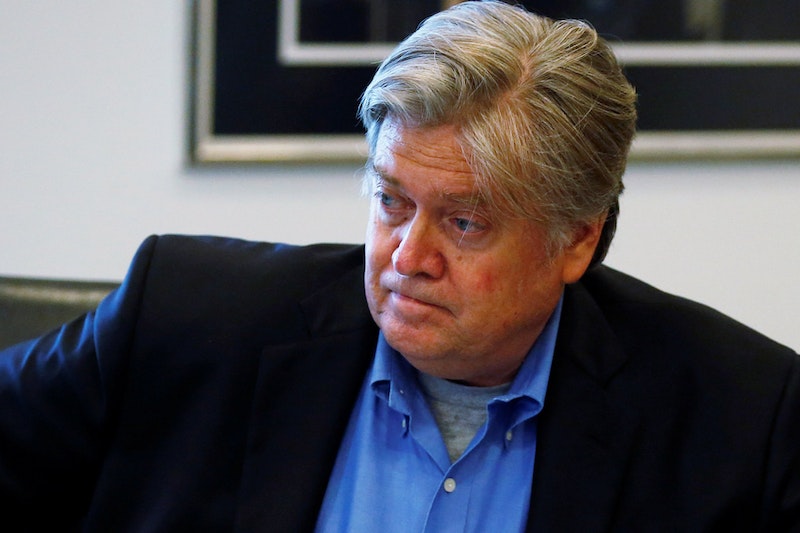 A great deal of anticipation and hand-wringing preceded President-elect Donald Trump's announcement of his pick for White House chief of staff. Had Trump’s campaign CEO and former Breitbart News executive, Steve Bannon, got the job, it would’ve been a bad sign for the new administration, given his reputation as an anti-Semitic ethno-nationalist. Trump defied the wishes of the Tea Party in choosing RNC chairman Reince Priebus, but the relief was fleeting. Trump quickly tapped Bannon as his “chief strategist and senior counselor.” The two advisors will probably battle it out in a competition for influence over, and access to, the next President, which is what Trump likes. Priebus may soon regret his decision to take the job under such circumstances.

Relatively few Americans outside of right-wing circles had any idea who the 63-year-old Bannon was before his new job announcement, and even now he remains mostly a mystery character. Born in Virginia, Bannon graduated from Georgetown University and went on to obtain a Harvard MBA. After serving as an officer in the U.S. Navy, Bannon joined Goldman Sachs as an investment banker, eventually moving on to start his own boutique, media-focused investment bank.

In 1993, as head of Bannon & Co., he was named acting director of the ill-fated, $200 million Biosphere 2 project, an attempt to create a closed ecological system at the foot of the St. Catalina Mountains in Arizona. Financier Edward “Ed” Bass hired him as his “heavy” to come in and kick some ass after his pet project was bleeding cash. Four men and four women were placed in a closed habitat resembling a giant greenhouse in 1991, but the project was plagued with mishaps from the outset, including allegations of sexual harassment by Bannon against two women.

As reported in the Tucson Citizen, Bannon admitted in court to threatening Biosphere 2 crewmember Abigail Alling and making disparaging remarks about her. He said he'd told her he'd shove a five-page safety memo down her throat, and called her a “bimbo.” The jury ordered Space Biosphere Ventures to pay $600,000 in damages.

Bannon had more success in Hollywood, where he produced Sean Penn’s directorial debut, Indian Runner, in 1991 and Titus, starring Anthony Hopkins in 1999. He also used some of the millions he made as an early investor in Seinfeld to make a series of conservative-themed movies, the most recent, Torchbearer, which he directed as “a Christian war film,” starring right-wing folk hero and Duck Dynasty star Phil Robertson. Before that, Bannon financed and directed the documentary Occupy Unmasked, a takedown of the Occupy Wall Street movement, and The Undefeated, a hagiographic portrayal of Sarah Palin (“daughter, wife, mother, warrior”) that features the former Alaska governor as a brave, anti-establishment hero. The film, offered as a corrective to negative media attention, is a skillful piece of propaganda.

In March of 2012, Bannon took over as top executive at Breitbart News, which he began to mold into the most high-profile media outlet of the alt-right. Former Breitbart editor-at-large Ben Shapiro, who admired Andrew Breitbart but quit under Bannon’s tenure, wrote afterwards, “Andrew Breitbart despised racism. He used to brag regularly about helping to integrate his fraternity at Tulane University. Now Breitbart has become the alt-right go-to website, with [technology editor Milo] Yiannopoulos pushing white ethno-nationalism as a legitimate response to political correctness.” Shapiro has bemoaned the fact that Bannon has abandoned Andrew Breitbart's mission of fighting the “Democrat-Media Complex” in favor of transforming the publication Breitbart founded into “a Trump Pravda for his own personal gain.”

Bannon’s many critics call him a racist and an anti-Semite, which he refutes, but it's undeniable that American ethno-nationalists and the growing number of them in Europe will soon have a friend with daily access to the new president.

Bannon will be serving himself over any other causes (such as the GOP or America) for as long as he lasts in the White House. He hates the Republican Party, as it exists, calling it the “party of Davos donors.” His loathing for the left is visceral. He’s the type who wants to burn things down and start over again. A master manipulator, he’ll play to Trump's susceptibility to flattery. Steve Bannon’s a smarter version of Trump. By many accounts, he's also a mean and vindictive bully prone to verbally berating people. It’s likely he’ll bring out the worst in the 45th president.