Why Can’t Hillary Get Elected President? 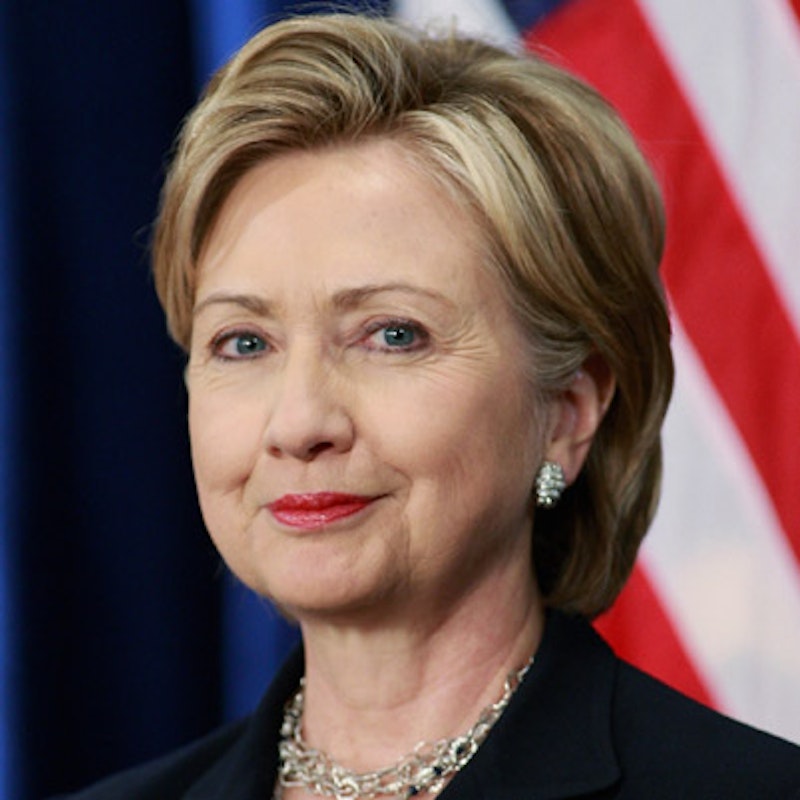 Hillary Clinton is so hot that New York just published a cover story to let us know there's no big news about her. She isn't secretary of state now, and as of yet she isn't really running for president or doing much to plot her run. She's just resting, sitting around the clubhouse between seasons. The article checks in anyway and fills airtime with blind quotes aimed at various Clinton satellites and, occasionally, the Clintons themselves. Here's something: Hillary doesn't mention her man's name all that much. “It’s kind of jarring when she says ‘Bill,’” says “a close State aide,” looking back on meetings with the boss. “And then you realize that she’s talking about her husband. It happened so infrequently that you were kind of like, Oh, the president.”

The reporter, Joe Hagan, talked with Clinton herself, who let him know she was “both pragmatic and realistic.” The article is the kind that lands nothing big but stays on its toes regarding the politician's little tricks: “Clinton stepped backstage, a red-white-and-blue ribbon around her neck pulled taut by a saucer-size gold medal. 'It is really heavy,' she said, with that plain-home midwestern tone she deploys when she wants to not appear the heavy herself.” Well, you know what he means.

The article does provide an interesting bit of conventional wisdom: “She was, after all, under the tight grip of the Obama White House, which directed major foreign-policy decisions from the Oval Office.” Apparently this is something people know. Of course, the article also says that Hillary dodged high-risk policy areas like the Israeli-Palestinian deadlock, a choice that sounds to me like a big decision and therefore Obama's responsibility. After all, if he wanted action he could have told her.

I note this even though I like the idea that Obama was in charge. It fits with a theory I have, which is that Hillary is good at small things but not so good at big things. When she has to step up, she falls down. As first lady her big job was health care; she crashed it. As senator her big vote was on Iraq; she voted yes. As a presidential candidate she hired Mark Penn and never figured out how Democrats allocate delegates. As secretary of state she did what Obama told her and thus compiled a record she can point at instead of hide from. No big screw-up except Benghazi, which is really a medium-size screw-up involving administrative snafus. Administration is normally her forte, but her screw-up mechanism may have sought release where it could once Obama had locked it out of the big time.

You'll see this is a sexist narrative. The theme would be that the woman should stick to tending her man and leave the big ideas alone. No, that's not an idea I go for. But I think Hillary is being a bit self-destructive. She's wrong-footing herself by secretly acting out a stereotype. I think the first members of subordinate groups who step up to primary roles tend to have their heads split a few ways. Sometimes such a person may think he or she is marching along, and at the poor pioneer's side is the dumb-idiot twin representing everything bad the dominant majority expects of the pioneer's particular group. It's like the poor striver has to generate this being to keep the gods happy, and then the thing starts crowding in when decisions have to be made, and next nobody knows which did more to shape the person's life—the person or the dumb-idiot shadow?

From a feminist point of view, Hillary's always had a fold down the middle. She had to take her husband's name and wait on the sidelines while he became governor and president. Only afterward did she get her shot. Her career has been a compromise, the sort of hybrid that can bridge an old order of things and a new one. In this case the orders are the patriarchal and the not-as patriarchal, and living between them may have put a loop in her psyche. She keeps marching forward and the shadow keeps tripping her up. Will Hillary become president anyway? Maybe, but in contests like this the shadow usually gets its way.