God, Please Tell Me the Pope is Gay

It would be the best thing to ever happen to the Catholic religion. 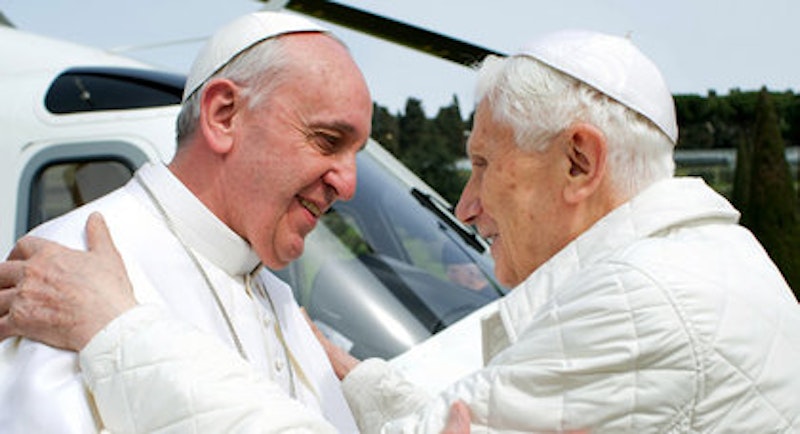 It’s not like Pope Francis came out on the Vatican balcony waving rainbow flags. He merely said that the church had “grown obsessed with abortion, gay marriage and contraception.” He expressed concern about the church becoming a “small chapel” due to its dwindling numbers. His now famous “Who am I to judge?” comment regarding gays was just basically expanded with a recent vague and odd-sounding statement about “not interfering” with them.

Conservative Catholics, who stopped just short of issuing quotes about the Pope “losing his motherfucking mind,” were clearly concerned. The President of the conservative Catholic League said eerily, “The pope with a few words had unsettled so much.” Really? Because it’s not like the Pope released a “Call Me Frankie” rap video with Snoop Dogg featuring Ru Paul and has suddenly begun throwing Vatican parties with male hookers and blow. He toed the line on abortion, telling “Catholic gynecologists” (which should be an oxymoron but unfortunately isn’t) that, “Every child that isn’t born, but is unjustly condemned to be aborted, has the face of Jesus Christ.”

Now there’s the judgment, guilt and shame we’ve come to know and love as Catholics! You’ve gotta love a church where you’re not allowed to use contraception and you’re not allowed to have an abortion. All you’re allowed to do is have babies, so that the religion can continue to repopulate itself, and even that hasn’t worked. My daughter rejected her confirmation because she didn’t want to be a part of a religion whose politics regarding women, sexuality and most other issues were so positively archaic. It was a pretty big deal in our small town. The other mothers asked me why I wasn’t “making” her receive confirmation, and I responded that it was my understanding that we’re only allowed to force religion on children at baptism, that the whole point of confirmation was them choosing the religion on their own, and she didn’t. Simple as that.

Our family is more or less in the Holly-Lily category now: we go to church at Christmas and Easter. We say grace on Sundays. I don’t want my kids in Sunday school learning things I don’t agree with. My challenge is to figure out a way to teach them the essence of spirituality without the shame of membership in a religion that simply doesn’t accept everyone.

It’s not that I don’t have faith. I don’t mind the religion part of my (mostly former) religion; it’s the politics I have a problem with. The Pope’s new statements, to me, seem encouraging, a step in a not-backwards direction, and I will be curious to see how things develop with the church. A gay pope would be the best thing to ever happen to the Catholic religion. But they have to catch up one century at a time, and good for Pope Francis to begin that long journey. I’d be glad if my children had a less condescending, judgmental religion to rebel against me and go back to someday if they felt like it. Heck, I'd even go back myself if the pope was gay.