Tim Wise is no Robert Shaw (and neither am I). 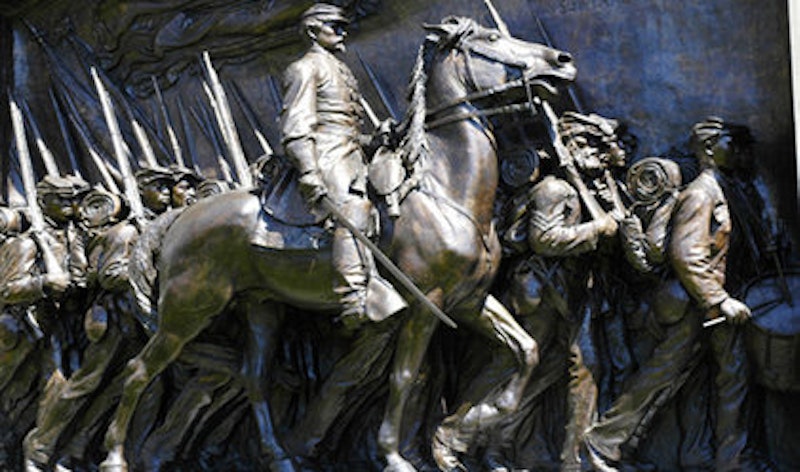 Tim Wise is a white anti-racism lecturer and writer who spends most of his time trying to educate fellow whites about their privilege. White people, Wise argues, are accorded respect and opportunities simply because they're white. Then they assume that their triumphs are based on work or genius.

So what did Wise do when some critics suggested that his success as an anti-racist lecturer was based in part on privilege? He responded by betraying his life's work.

"it's not on me, sweetheart..plenty of people of color get book deals and speaking gigs each year…if u didn't its not on me…it's cuz u haven’t said anything that anyone finds valuable"

Others’ success has something to do with white privilege, but not Wise's. He is, apparently, the only truly meritocratic white man in America.

Suey Park, who writes at the blog Critical Spontaneity, eviscerated Wise and "white allies" in general in a series of pointed tweets:

My main critique of white "allies" has to do with Tim Wise's work, which many white allies find appealing. Why is it appealing? It's appealing because his work is centered around a redemptive narrative of white allyship. He's basically an evangelical preacher. And in said work, he pinpoints how racism ALSO hurts white people, and thus they should care, rather than caring b/c it hurts POC…The problem isn't just TW and HS. It's how white people need to frame racism around themselves to care about it.

As someone who's written about how sexism hurts men, that hits uncomfortably close to home. As does Park's comment to Wise that "We wouldn't need white allies if white people didn't start racism in the first place!"

"My argument is one of agency," Park adds, which I assume she means that a focus on white allies inevitably sidelines people of color and their choices. When Park objects to this Atlantic article, she's objecting to the apparent mainstream preference for stories in which people of color become props in the moral apotheosis of some white guy, so that their pain becomes his redemption.

As Park says, that kind of narrative is gross and infuriating if you happen to be the person whose suffering is being repurposed. As a thoroughly assimilated Jew, I face no discrimination to speak of in the U.S., and yet I still feel a personal and enduring repulsion for the way my people's history is used for the sanctimonious validation of an exemplary goyim in the dreadful Schindler's List (perpetrated of course by the Jewish Steven Spielberg, just to twist the knife further.)

Still, even if I hate Schindler's List, and even if Tim Wise has embarrassed himself, I do still think discussions of white anti-racism are pretty important. Nor do I think that those stories have to fit into the Schindler-savior-aggrandizing-white-people role that Park eviscerates.

As an example, I'd point to Robert Shaw, the white leader of the black 54th Massachusetts during the Civil War.

As those who have seen the 1989 film Glory know, the 54th led the attack on Fort Wagner in Charleston, and was decimated. Shaw was killed, and Confederate General Hagood ordered his body thrown in a trench with the black enlisted men. Accounts differ as to the reason for this order, but a captured Union surgeon reported hearing Hagood say that it was supposed to be a deliberate indignity. When Union officials tried to get the remains returned, Shaw's father told them that the family "would not have his body removed from where it lies surrounded by his brave and devoted soldiers." Later, when a statue to Shaw was commissioned in Boston, Shaw's relatives rejected a standard single figure-on-horseback statue, because they felt it put undue emphasis on Shaw and not enough on the men he fought with. Instead, the sculptor Augustus Saint-Gaudens created a bas relief showing the black infantrymen standing massed behind Shaw's mounted figure.

James Loewen, in a beautiful essay about the Shaw monument in his book Lies Across America, emphasizes that the statue succeeds not because it is about Shaw, but rather because it isn’t. The monument "symbolizes 'together,' as the words on its back proclaim—not only between blacks and white but also between officers and enlisted men." Shaw's commitment to his black soldiers was not a commitment to saving them; it was a commitment to fighting alongside them. He certainly had privilege; he led the regiment because of his class and race, not because he was a better soldier than any of the black people who served under him. But that privilege was deployed not in the name of rescuing black people, but in the name of their agency. Glory quotes from his letters to his parents, in which he wrote, "We must make it a whole country for all who live here, so that all can speak."

That speech is not just through voices, but through actions as well. As Roger Ebert says, Glory focuses too much on Shaw, but the film does do a good job of showing that his main heroism isn’t in being a hero on his own account, but in pushing against white people's bureaucratic red tape and racism in order to give the black soldiers an opportunity to fight in the battle they've chosen.

And by making that choice, they changed the country. As the monument says, "They gave to the nation and the world undying proof that Americans of African decent possess the pride, courage, and devotion of the patriot soldier." The 54th's performance led Congress to approve the enlistment of more black troops, which in turn led to profound changes in white Northern attitudes. There were white riots against black people in New York at the time of the attack on Fort Wagner; eight months later, whites cheered the states' own black infantry regiment as it marched through the streets.

It's true that if there was no white racism, Shaw couldn’t have stood against racism; he wouldn't be remembered. But if there were no white racism, Shaw wouldn't have had to die at 23, either. His life and fate show that racism in this country really has done great evil to white people as well as black. And it shows that white people can work for black liberation—or, more precisely, can work to help black people liberate themselves.

But I don't think that's exactly a feel-good story for white people. Because, if Shaw is the standard, how many of us white people live up to it? In his 1960 poem "For the Union Dead," Robert Lowell contemplates Shaw and the 54th, and in comparison sees in his contemporaries a "savage servility." The monument, he says, "sticks like a fishbone/in the city's throat." It's a standing rebuke.

I think white people like me, and Tim Wise, need that rebuke, as well as that inspiration. Shaw died so other people could fight for their own stories. White people need to know that that's possible, not to make us feel good about ourselves, but so we can understand how we're failing.