Navy Yard Shooting Was a Victory for the NRA 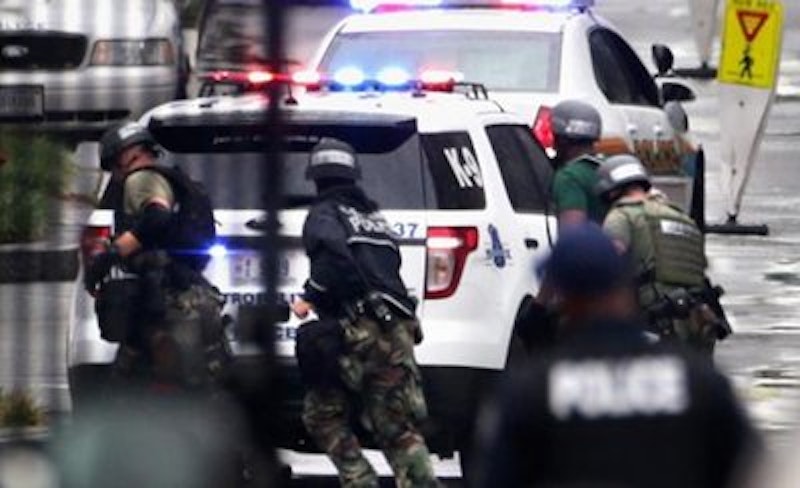 So what, it is fair to ask, is so sacred about the Second Amendment that it can’t be touched or tweaked just as the other 26? To the reasonable American conscience, the Second is certainly subordinate to the First Amendment from which all other freedoms issue. And it has been revised and reinterpreted a dozen times to the point where burning a flag, no matter how abhorrent, is a legitimate form of expression.

The difference between the First and Second Amendments is this: The First is a state of mind and the Second is a state of commerce that can be measured in actual dollars. Guns are big business. There are 3.4 million firearms manufactured in America annually that produce $11 billion in revenue, according to statistics compiled from state fish and game departments, the Bureau of Alcohol, Tobacco and Firearms and the IRS. Those numbers alone are the very reasons for the existence of the National Rifle Association. The NRA is in the business of selling guns.

So here we go again with the familiar roundelay: Another mass shooting. Another drawn out debate. Another victory for the NRA. There has been one mass shooting a month since 2009, according to one report, and 33 shootings a day across the country. The average over the past 30 years is 20 mass shootings a year. The FBI defines a mass shooting as one in which at least four people are killed.

Among the most recent and notable are Aurora, Columbine, Oak Creek, Virginia Tech, Tucson, Fort Hood, Newtown and now the Navy Yard in the nation’s Capital where 12 people were murdered last week by a deranged gunman, a loner with a grudge and a problem. And the FBI has declared Chicago as the nation’s new murder capital, with 500 murders in 2012. (Late last week, 13 people, including a three-year-old boy, were shot at a public basketball court in Chicago. The shooter used a military-style assault rifle.)

The murder of 26 students and teachers at Sandy Hook Elementary School at Newtown, CT, has had the opposite result of the push for tighter gun restrictions. Since then, 18 states have expanded gun rights and 10 states have similar legislation pending. Only a handful of states, notably Maryland, New York and Colorado, have tightened gun laws. (Two Colorado lawmakers lost their seats in a rare recall election for supporting the state’s strict new gun law.)

In fact, Iowa took the reverence for gun ownership a leap beyond other states. Iowa broadened its laws to allow the blind to own guns. So far, Iowa has issued gun permits to three legally blind people. President Obama’s gun control package is languishing in Congress, which lacks the cojones to do anything that would offend the NRA and its steady stream of campaign contributions.

News competes with news. Following the Navy Yard shootings, Obama revived his call for background checks as a condition for gun sales, the least objectionable plank in his package. But the request and even the massacre have been eclipsed from the nation’s agenda and the news by the fiscal calamity and the prospective government shutdown the nation faces because of the protocol standoff between the White House and Congress. Even Pope Francis’s conciliatory statement about the Catholic Church’s hard-line obsession with sex knocked the Navy Yard shootings off the front pages.

So last week’s indiscriminate slaughter of 12 people was muted and caused less fuss than usual, probably because no assault rifle was used and no extended magazine clip was involved. And the shooter, Aaron Alexis, a Navy reservist and contract employee, displayed repeated warnings of instability and on numerous occasions actually sought help at VA hospitals. He was not red-flagged.

That gave the NRA’s human trumpet, Wayne LaPierre, the occasion to employ the usual diversionary tactic. LaPierre lamented the lack of a national data base of the mentally ill just as following the Newtown shootings he called for armed guards at every school in America. To LaPierre and his employers, the nation’s gun manufacturers, anything is preferable to limiting guns or tampering with the Second Amendment.

In Maryland, there is a rush to beat an Oct. 1 deadline when strict new gun laws take effect. Such a backlog of applications for gun purchases has built up that the State Police have added staff from other departments to help process the paperwork. Beginning on Oct. 1, gun applicants in Maryland will have to pay a $50 license fee and submit a fingerprint background check along with a four-hour training course. The new law, passed by the 2013 General Assembly, bans 45 different assault weapons, limits magazine clips to 10 rounds and requires reporting of lost or stolen guns to police within 72 hours. People convicted of certain non-violent crimes are prohibited from owning a gun.

Americans own more guns than any other people. They regard gun ownership as part of their birthright and demonstrate a reverence for the Second Amendment that is usually reserved for deities. If, as the NRA claims, more guns make a safer nation, then America would be the safest place on earth. It is the Second Amendment that has been at the center of much of the nation’s constitutional debate over whether that simple protection applies to individual citizens or those owning guns to participate in the protection of civic freedom and liberty.

Much of the interpretation is based on the placement of a simple comma. For as a statement of freedom the amendment is one thing, but as a simple work of grammar the sentence (or is it?) couldn’t survive a freshman composition class. Its draftsmanship is sloppy and its punctuation is atrocious, leading to the confusion and debate.

Neither rendition would win a literary prize. Because of the overuse and misplacement of commas, the first version has been interpreted to place emphasis on the militia aspect of gun ownership while the second, somewhat sanitized, version tends in the direction of the individual. The imprecision and the ambiguity of the two versions linger on.

In the landmark gun case, The District of Columbia vs. Heller (2008), the Supreme Court decided that “Second Amendment rights are subject to reasonable restrictions.” In fact, the Court, including Justice Antonin Scalia, decided which guns can and cannot be banned.  The ruling “limits the type of weapon to which the [Second Amendment] right applies…”

The question Congress, in its somnolent daze, must answer is this: How many more people have to die in mass shootings before it works up the courage to defy the NRA?