Why Barack Obama Is Hard To Listen To

Not cold, not arrogant, not stupid. But even so, something's wrong. 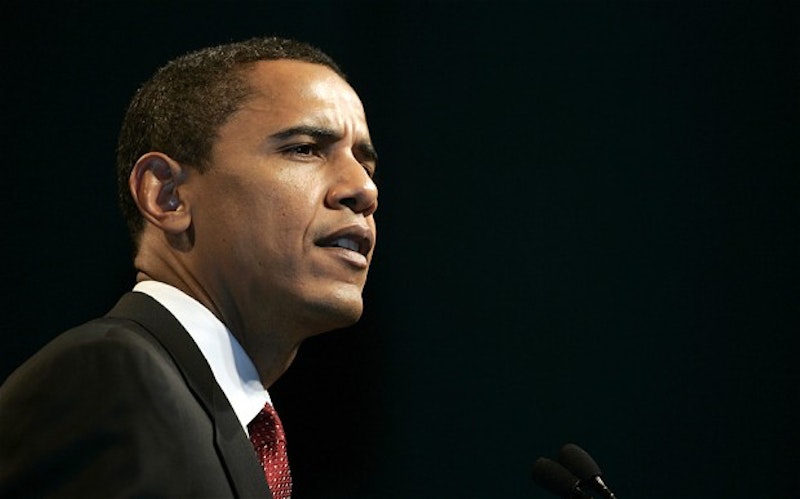 Barack Obama has a voice with wonderful resonance. When he wants it to, it can boom, and it does so without his words getting pulled out of shape. They keep their edges and stay enunciated as his voice achieves lift-off and sails them out over the audience. That's what the pundits call “soaring rhetoric.” It's a gear Obama has available; other politicians don't. Since Obama is not stupid and can make good points, and since he is tall and handsome and easy to display to a crowd, people say he's an orator. But he isn't.

Watching Obama talk is like watching a man at a train crossing. When he speaks a sentence, he's trapped there, waiting for it to finish. He's waiting for his own sentences to trundle past. People on the right say that he's dumb and can't get by without his TelePrompter. The evidence doesn't support this. Obama took questions from the House Republicans at one of their conferences; he fielded everything they had and didn't break a sweat. At his great disaster, the Denver debate with Mitt Romney, Obama didn't tangle his words or screw up policy points. He droned. He acted like speaking to an audience was the same as shoveling out his thoughts, and like he couldn't wait until the job was done.

One thing about an orator or a salesman or anybody else who knows how to persuade strangers: when they talk, they're not waiting for the happy, magic moment when they get to stop talking. They may know when to stop, and they may do it out of a sense of strategy, but they don't live for the moment when their jaws come to rest. Obama does.

When he gives speeches, he can make good points in a loud voice while reading from a text and swiveling his profile (to display expressions appropriate to his text). He hits his special gear, the voice-boom effect, and reporters talk about oratory. But he's just going through the motions.

That fact is what comes to light when he flounders. Not ignorance or air-headedness, just a fundamental lack of conviction that he's taking part in something that makes sense. I think we all wander into moments like that, or at least we do if we're not absolute extroverts. Social engagement can be a strain just because it has to be held overhead, like a tent without a pole; we have to pretend all is free and easy when actually effort is involved. We end up in moments where nobody is quite sure what they're supposed to be doing, and we don't live again until such a moment is over.

Too bad for the introvert. I think Obama has more such moments than most people. To me his life seems like a sort of hell, since he's trapped explaining big dumb facts to a giant nation: we can't default, we can't let our kids get shot at school, and so on. He's committed himself to a lifetime of saying these things and he's not sure they can really need saying.

He's stuck in that suspended, unhappy second when a speaker finds himself halfway along a sentence that probably shouldn't exist. In fact the speaker would like to shut up, because everybody knows what the Reformation is, right? But the other person's eyes insist on remaining blank. Maybe there are people who don't know about the Reformation, so…

Obama's public life is lived in that social limbo. Obama can go upstairs and talk with the wife and kids, live his life there. But then he must go downstairs and face the big blank eyes again. That's his life too: it's his job and mission and the source of all he wants to accomplish in the big world. But it's an absurd line of work. It's centered around a craggy, massive given that is there for arbitrary reasons, that's just flung in: the impassive stupidity of the public's mind.

I don't mean that Americans are especially stupid. I do mean that the mind of any public is at a low level, and that America's right wing has dragged the national topic list into absurd territory. So the president says things like we can't default, we can't let children get shot.

But he keeps on. He sticks the parts of his sentences together with um and uh. The words he finds are never inspired, but they'll do. Basically, he's explaining the obvious to people who don't always want to hear it. There are personalities that thrive on situations like that, and those are the people you expect to go into politics: windbags like Winston Churchill and salesmen like Bill Clinton. They love themselves and are ready to shine. But for Obama, the public's perpetual case of brain-stop is just a glitch, a hold-up in proceedings.

Of course, the hold-up lasts forever, but that's how people want it. They insist on this central fact of public life, and Obama shows his superior character by applying himself to living with that fact. He will do what it takes. That's leadership, he says to himself.

Reporters describe him as Spock-like and professorial. Maybe a bit. Mainly he's sheepish and constrained. Down at the root, even when he's showing some temper or being sentimental, he's not quite sure he's supposed to be saying all that he's saying.

He's waiting for the moment to end, for things to go back to normal. But he's enlisted himself in a life where that same moment keeps recurring. Really, he's trapped. The result is a man who's very hard to listen to.