This darkness must end. 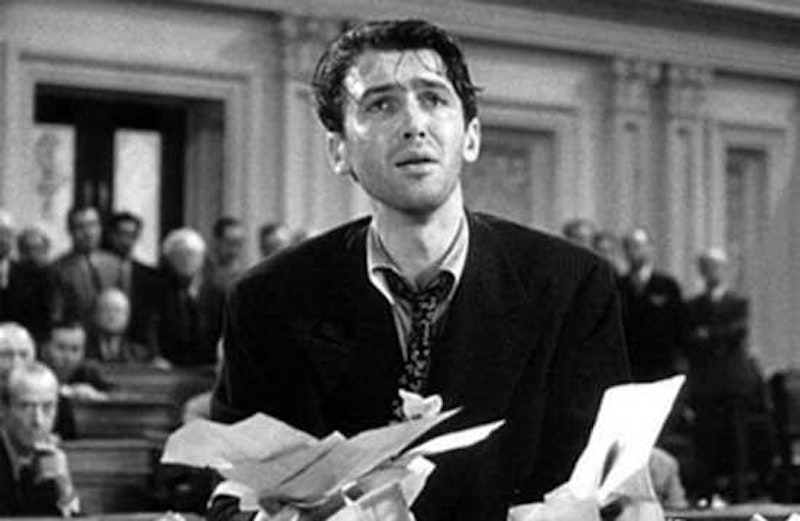 Back in the dark ages, when the earth was cold and gray and mammoths ruled the Senate, the filibusters crept quietly amidst the cavernous and dripping spittoons, skittering onto the floor only once an age, impelled either by a particularly foul cascade of Senatorial flatulence, and/or by an urge to defend the minority's right to preserve slavery. In recent years, however, the creatures have grown bold and adipose, consuming great tubs of staffers and even an occasional lobbyist.

The Mudall/Urkeley Plan. Currently, a filibuster is automatically instituted whenever Mitch McConnell's dentures shift. Far too many bills have been squelched in the dank interior of the Senate minority leader’s aging glottis. The Mudall/Urkeley plan would force civic responsibility by requiring McConnell to watch the entirety of Mr. Smith Goes to Washington every time he wants to institute a filibuster. There will be multiple choice questions afterwards.  As the Founding Fathers of our nation, Frank Capra and Jimmy Stewart deserve no less.

The McCain/McCain Plan. After a long Senatorial career of cantankerous hypocrisy, John McCain has finally admitted that his colleagues are all stupid and unworthy and that none of them has the stature or fortitude to cosponsor a bill with Mr. Maverick. Therefore, McCain, after much deliberation, has agreed to co-sponsor a bill with himself. The McCain/McCain filibuster reform plan allows automatic filibusters on all bills except defense bills, because defense bills are awesome. A filibuster on one of the unimportant non-defense bills can be broken if, in exchange, the United States agrees to invade a sovereign nation (preferably in the Middle East, but other options will be considered if all other Middle Eastern nations have already been invaded.)

Also, the McCain/McCain plan requires the nation as a whole to unanimously admit that everyone would be better off if Barack Obama had lost the election in 2008. This doesn't have anything to do with the filibuster, but it's been on McCain's mind, and also on McCain's, and they just agreed it was long past time.

The Boehner Plan. Named after House Speaker John Boehner, this plan would make the Senate exactly like the House, eliminating filibusters on condition that the chamber pass nothing but repeals of the Affordable Care Act, demands for Obama's birth certificate, and resolutions encouraging more hurricanes to strike the effete, godless, east coast. Should Congress accede to any other measure, Eric Cantor is empowered to walk right up and hit Boehner in the face with a rubber chicken while Paul Ryan paddles his naughty behind with a copy of Atlas Shrugged.

The Harry Reid Plan. Similar to the Mudall/Urkeley Plan, Reid’s would demand that Senators fight for their right to filibuster. In Reid's formulation, however, the fighting would involve actual gladiatorial combat. Nude, oiled, and fresh from the Congressional gym, Senators wielding only sharpened briefcases and withered genitalia will clash in a seething rictus of quivering animosity. The carnage will be broadcast live on C-Span, betting encouraged, with all proceeds going to pay down the national debt. At the end, when the last Republican has been throttled with the entrails of the last Democrat, there shall at last be no filibuster forever. And a grateful nation shall cheer.