His inaugural address talks about America as if liberals belong here. 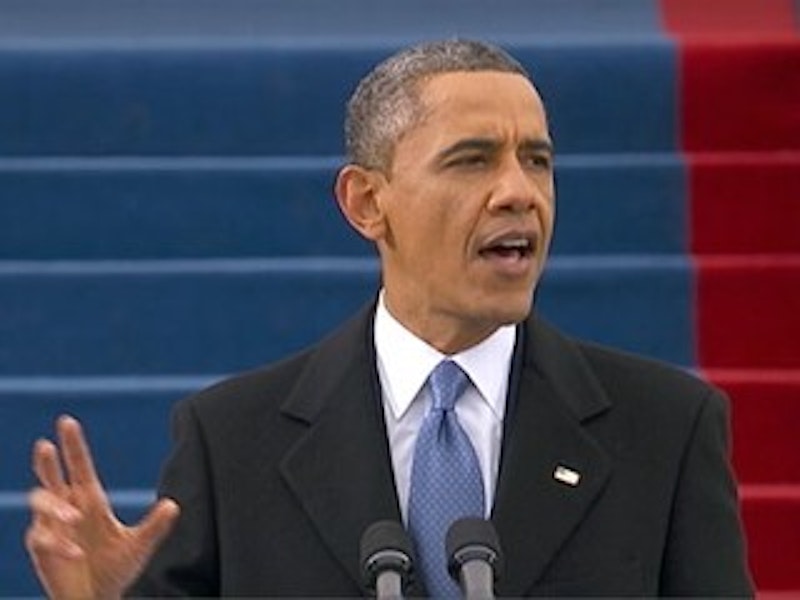 Sworn in for a second term, President Obama spoke about equality and the fight for it. He said people on programs weren't “takers.” He threw in a landmark passage about Our America, blue-state edition (“our forebears through Seneca Falls, and Selma, and Stonewall”) and he said “gay,” as in “Our journey is not complete until our gay brothers and sisters are treated like anyone else under the law.” Paul Krugman and James Fallows and other figures on the near left are feeling good.

Obama didn't promise any big actions or stick it to the forces of bad. But he talked as if his side were the majority. It was like they had just won an election, had won others in the past, and could reasonably expect to win some more in upcoming years. Like they had a right to say, “America is this,” and then fill in the blank.

An inaugural is when America gets recapped: Here's what we are, here's why it's so wonderful. Here's who gets mentioned when you talk about America (meaning what groups, doing what). And so on. Obama gave a recap of America as a place where people who are out of the sun, pushed out of the good things of life, can struggle to get in with everybody else. A place that was wonderful because it allowed this to happen, and because often enough the government pitched in to help.

Hence Stonewall. When Ronald Reagan was inducting Vietnamese-Americans into the national family, he introduced a Vietnamese-American cadet in West Point uniform during his state of the union address. Obama ushers gays into the list of nameables by talking about an incident involving boys in mesh t-shirts throwing things at police. The boys in the mesh are now forebears; they're doing what Rosa Parks did, and the Seneca Falls women, and (in Obama's view) the Founding Fathers. They're an out group that's making trouble so it can become an in group. Obama stuck “we” and “us” on this vision and thereby claimed some space from Republicans. They're sure that  “we” and “us” belong next to ideas that are nothing like these.

Soft-spoken defiance. Look in Obama's speech for liberal equivalents of these phrases from Ronald Reagan's second inaugural: “When our economy was finally freed from government's grip...  must never again abuse the trust of working men and women, by sending their earnings on a futile chase after the spiraling demands of a bloated federal establishment... elected us in 1980 to end this prescription for disaster... act now to protect future generations from government's desire to spend its citizens' money and tax them into servitude when the bills come due.”

You won't find them. Obama claimed space from the Republicans, but he didn't get chesty about it. He pointed to no villains and decried no swindles. Nothing about arrogant corporations pulling apart the American middle class, or a political party that thinks government ought to serve the rich. He could just say carefully that certain people had “suspicions” about the role of government, and that “we” ought to be careful about mistaking “absolutism for principle,” “spectacle for politics,” and “name-calling” for “reasoned debate.” The right won't like it, but they can cast an eye back to the way Reagan talked.

Something wrong here. In fact Alex Massie did so, but not carefully. Writing at The Spectator, he reported being a bit put off by Obama's tone in the inaugural: “The goodness of his ideas and his intentions is presumed; opposition to them must be predicated upon something sinister.” Massie said the trait reminded him of Reagan, which is a bit frisky for a conservative—the idea that Reagan and Obama might be both a bit irritating in the same way.

As proof of Obama's can't-be-wrongness, Massie cited a long passage in which the inaugural states liberal priorities as being priorities: Here is what we want for society, here is why these are good things to obtain. But he had trouble pinpointing what was wrong with the passage. “That's fine,” Massie wrote, picking up at quote's end. It was? Then what? He decided the problem was this: “But even as the President decries false choices he sets up a series of false choices himself.” Such as? Massie quoted just one: “The belief that America must choose between caring for the generation that built this country and investing in the generation that will build its future.” This quote was Massie's whole case for saying Obama was stuck on his own righteousness.

I think the writer was just feeling a jolt. Obama presented his ideas as if they didn't need excuses, as if they made sense and belonged to the natural order of things. Liberals don't get to do that too often, especially in America. Massie is British but an America watcher, and he's on the right. An inaugural address about caring and investing was a bit much for his nerves.

Characteristic sounds. Every now and then an Obama text strings together some good passages. Not that often. The inaugural has plenty of fancy bits, but they're drab:  “tempered by the flames of battle… uphold our values through strength of arms and rule of law… long for freedom… striving, hopeful immigrants who still see America as a land of opportunity... that precious light of freedom.”

But the start of the passage works, with that repeated short phrase “We must act… We must act...” That's the one-two slog of the progressive staggering forward: one foot, then the other foot, never mind the snow. No, we don't expect to see Utopia. We'd just rather move forward than back.