It's been two decades since Democrats have been willing to take on Republicans and the gun lobby over firearm access. 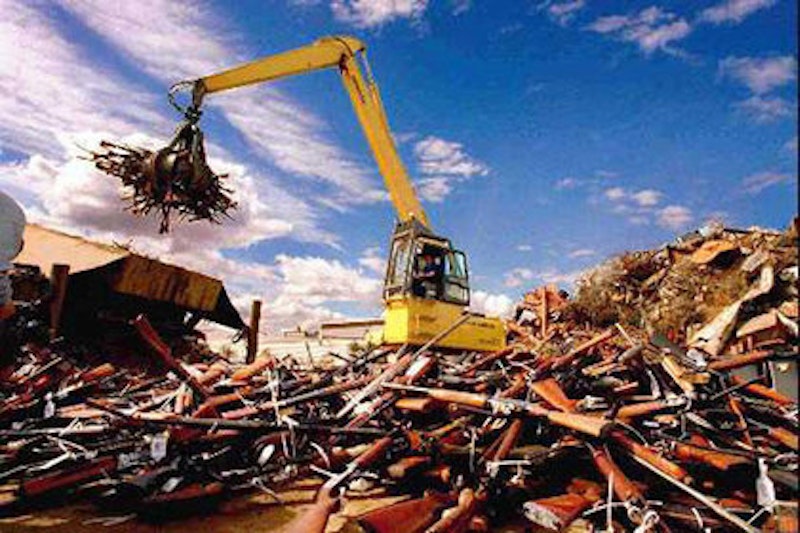 Gun buyers and firearms dealers in the Mid-Atlantic region are about to get less bang for their bucks. New York has just adopted the toughest gun laws in the nation. Maryland is not far behind, with Gov. Martin O’Malley (D) refusing to be outdone by his political nemesis, New York Gov. Andrew Cuomo (D). Even Delaware is pushing to tighten laws on gun ownership. New Jersey Gov. Christ Christie (R) says he supports a ban on assault rifles. In the northeast, Massachusetts is moving to limit access to both guns and high-powered ammunition. And on the western edge of the country, California, followed by Colorado, may go even further than New York and Maryland in the national effort to reduce gun carnage in public places.

In what is essentially an urban vs. rural showdown, what was once a forbidden issue for Democrats has now become a rallying point for governors and mayors backed up by people and polls following the slaughter at Newtown, CT. Sensing that the time is now or never, it has been nearly two decades since Democrats have been willing to take on both Republicans and the gun lobby over the issue of limiting access to firearms.

While President Obama has unveiled an ambitious gun control agenda, it is action by the states that is more likely to budge a resistant Congress than a showdown with the White House. Pressure builds from the bottom up, not the top down. That is precisely why the Obama Administration is planning to replicate its recent successful presidential campaign by taking the crusade for gun control directly to the states and, probably more specifically, to targeted Congressional districts of moderate Republicans. It is fully activating its campaign apparatus to advance the cause and rouse its constituency under the advocacy group name, “Organizing for Action.”

Obama’s gun control package is built around universal background checks for all gun buyers, a crackdown on gun trafficking, a ban on military-style assault weapons and a ban on ammunition clips holding more than 10 bullets. He has already signed 23 executive orders that renew or reinforce existing programs. There is also a call for millions to underwrite a full range of medical and mental health services to detect possible threats to public safety.

In Maryland, O’Malley’s proposals would go a step beyond by requiring all gun buyers to submit to fingerprinting by the State Police in order to obtain a license, an effort to halt straw purchases and gun trafficking, especially from neighboring Virginia where gun shows are open air markets for illegal firearms. Statistics show that many gun-related crimes up and down the east coast can be traced to firearms purchased in Virginia. Maryland would also establish a minimum age of 21 as a condition for gun ownership.

Virtually every recent poll on the subject reveals that the public, to one degree or another, supports any or all new restrictions on gun sales and ownership. In fact, many polls show that even a majority of National Rifle Association members support a clamp-down on loopholes in the current system of laws on gun controls. Even Ronald Reagan supported the 1994 ban on assault weapons (which was allowed to expire in 2004.)

If this is the case, and a great deal of skepticism exists, there is a dichotomy between the NRA’s membership of four million and the organization’s leadership of gaping primates—to borrow H.L. Mencken’s phrase—which is downright belligerent in its opposition to any change in gun laws. Why, then, doesn’t the NRA membership simply overthrow the leadership?

The NRA, for example, stumbled over the line when it posted a video on its website calling Obama and “elitist hypocrite” for having Secret Service protection for his daughters at school while other school children go unprotected. The NRA’s president, David Keene, said on NBC that “What’s good for the president is good for working people,” a reinforcement of the NRA’s position that every school in America should be protected by armed guards roaming hallways and schoolyards, a position that many school systems reject because it involves more guns. Yet Obama’s proposals include protection for schools that want it.

In another display of its mental warp, the NRA also put out an app of a video game with miniature coffins as targets, a sickly and deranged reminder of the slaughter at Sandy Hook school in Newtown, CT. And the right-wing Drudge Report posted pictures of Stalin and Hitler posing with children as the first step in their campaigns to disarm the populace as a prelude to their dictatorial takeovers. At least two members of Congress have threatened to initiate impeachment proceedings against Obama, and Sen. Rand Paul (R-KY) has said he will sponsor the Civil War notion of “nullification” legislation that, incidentally, the Supreme Court has ruled illegal.

The black helicopter and tin foil antennae crowd are howling again. A group of like-minded patriots, under the collective name of Citadel, is planning to build an armed, walled community in Western Idaho to protect their liberty with that durable American symbol, the rifle, which will be used to protect the “honor and liberty” of every resident of the commune, according to published reports. Citadel’s website says: “Marxists, socialists, liberals and establishment Republicans will likely find our community is incompatible with their existing ideology and preferred lifestyles.” A reported 200 applications have been received.

The FBI estimates that there are 300 million guns in America. Nobody really knows for sure. The most heavily armed state in the nation is Kentucky. To put some proportion on the $12 billion a year gun business, ABC News has reported that there are 129,817 federally licensed firearms dealers in the U.S., and only 36,569 supermarkets. (The number of supermarkets was verified at the Food Marketing Institute website.)

The Johns Hopkins Hospital Center for Gun Policy and Research, at the Bloomberg School of Public Health, reported that there are 31,000 deaths in the U.S. every year as a result of gunshot wounds. It also reported that more than 70,000 persons are treated in hospitals for non-fatal gunshot trauma and that guns are implicated in “an estimated 337,960 non-fatal violent crimes” every year. The group has submitted its own list of recommendations to tighten gun control laws, which includes the almost universal proposal that background checks must be a key element to controlling the free flow of firearms.

The NRA propaganda machine likes to cloak itself in the Second Amendment as if it were an impregnable and unalterable shield. But it is the Second Amendment that is giving Obama, a constitutional lawyer, and other elected officials the maneuvering room they need to tighten laws on gun control.

In the landmark gun case, The District of Columbia vs. Heller (2008), the Supreme Court decided that, “Second Amendment rights are subject to reasonable restrictions.” In fact, the Court, including Justice Antonin Scalia, decided which guns can and cannot be banned. The ruling “limits the type of weapon to which the [Second Amendment] right applies…”

So, NRA officials ought to ask themselves: If there are limits on other amendments why can’t there be limits on the Second Amendment, as the Supreme Court suggests. The Supreme Court, in effect, is openly inviting Congress, the president and state legislatures to ban certain weapons.

There’s no question that Obama’s gun control package has a tough slog through Congress, where Republicans control the House and Democrats control the Senate and the NRA pretty much has its vendible way with both. House Democrats are only 18 votes shy of a majority and one possible key to victory there is establishing grass roots organizations in 20-25 moderate Republican districts. In the Senate, even some ranking Democrats, including Majority Leader Harry Reid, are wary of gun control legislation because of NRA threats.

The NRA, once an organization for grown up Boy Scouts that taught target practice and gun safety, has been taken over by the foam-at-the-mouth crowd led by its principal lobbyist, Wayne LaPierre, and its president, a heretofore fringe figure, David Keene. Today the NRA is a front group for firearms and munitions manufacturers with an annual budget of $200 million.

The NRA’s primary job is to sell guns. The NRA’s entry-card to Congress is money. Its stranglehold on members of Congress, especially in rural and Republican areas, is the threat to recruit and fund primary election opponents against those who betray its dictates. It also has the communications ability to terrify its members with threats of losing their gun ownership rights, which raises questions about poll findings that show a disagreement between the membership and the leadership.

What’s more, every time tighter gun controls are mentioned, NRA membership increases dramatically. Last week, an estimated 60,000 persons were expected to attend a gun show in Las Vegas, presumably to further arm themselves before any new restrictions might be approved. The NRA claims to have signed 100,000 new members since the Newtown slaughter.

In a fundraising letter to its four million members that was circulated at the Las Vegas gun show, La Pierre portrayed the NRA’s opposition to Obama’s gun control proposals as “the fight of the century,” according to The Washington Post. “It’s not about protecting your children. It’s not about stopping crime. It’s about banning your guns… PERIOD.”

Any sucker who believes that baloney doesn’t deserve to own a gun because of mental deficiency.