Who Cares If USA Today Has Lifted Facebook’s Emojis?

It’s not as if many take the daily seriously. 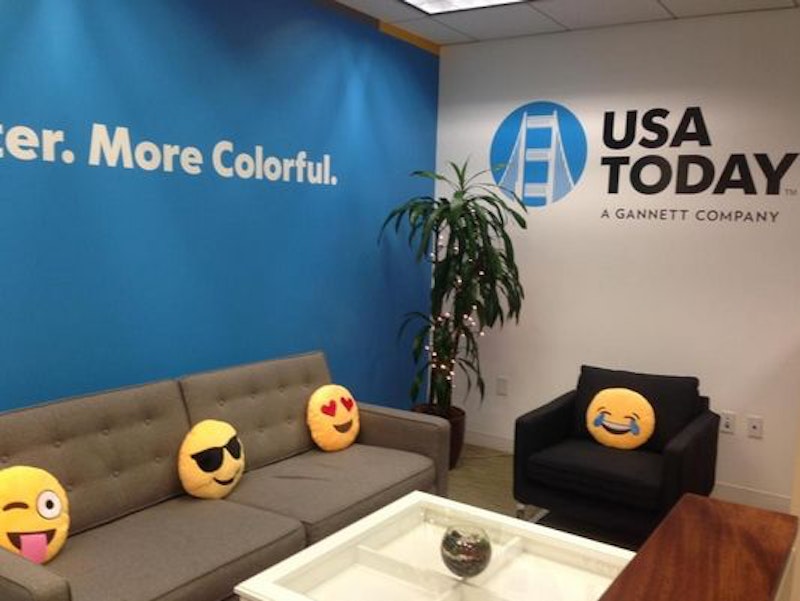 It’s been years since I’ve read a copy of USA Today—on a plane, hotel, dentist’s office, can’t remember, although it was probably about 1996 when I last paid for the daily at a newsstand—and although its print circulation is high (allegedly 1.8 million, as of last year) good luck trying to find someone who’ll admit they look forward to reading the snippet-filled broadsheet. (Actually, maybe it’s a tabloid now, I can’t say for certain, which says more about the disappearance of periodical vendors than the paper itself.)

USA Today is a joke, but give it credit: founded in 1982 by Gannett Co., to widespread skepticism, the colorful paper anticipated today’s digital-dominated media by producing short articles—usually 500 words or less—with lots of happy-talk (alongside sensational coverage of disasters, celebrities, political news and the like) that catered to an audience with the attention span of a mouse. Charts and graphs were scattered throughout the sections, often headlined annoyingly in the third-person plural. Garbage like “Why We Love to Hate Tom Cruise,” “Our Turkey Consumption is Up!” and “This Year, We’ll Travel More by Cars Than Planes.”

In any case, over the weekend USA Today was criticized by several tut-tut journalists for its introduction of Facebook emojis to tip off readers on the pleasant/unpleasant content of stories. (USA Today treats its readers like ninnies, but again, that’s part of its formula.) Hotsy Totsy is my reaction: it’s not as if USA Today has ever claimed any modicum of journalistic integrity—at least with a straight face—and in the landfill that is today’s media, this “transgression” is small potatoes. For example, to no one’s surprise, BuzzFeed is now producing more “native advertising” for political candidates. BuzzFeed’s an international embarrassment, but this move is more egregious than a happy or sad face embedded in a USA Today story.

Nevertheless, Adweek’s David Griner was somewhat perturbed—a “more in sadness than anger” moment—at the latest development at the daily. He wrote: “While they stop short of editorializing, the icons do feel like they’re trying to reflect how you should feel about the news, which blurs the line of journalistic neutrality a bit.” What century is Griner living in, if he still believes that “journalistic neutrality” exists?

Adweek received the following anodyne comment from USA Today editor-in-chief David Callaway: “Social media and its icons are becoming a dominant form of communication in our world. We wanted to show what they would be like if transferred to print.” Callaway also said his paper had no “official partnership with Facebook.” Whew, now I’m relieved!

In a media industry where serious newspapers like The New York Times and Wall Street Journal are often glacier-like in making corrections to their stories online (or in print), USA Today’s latest gimmick, if we’re thinking of ethics, is like jay-walking on a deserted Dallas street with no other pedestrians or cops to even witness the offense.