The battle over assisted suicide. 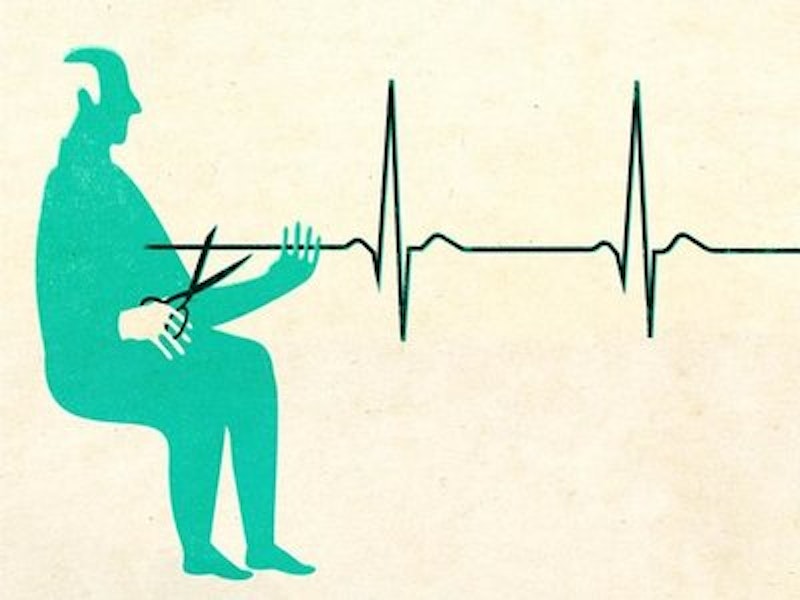 Death is God’s way of telling us to slow down. And now, despite all medical research to prolong life, man, as God’s masterwork and ever the curious tinkerer, wants to accelerate the process of dying. Politics and religion are again on a collision course and Dr. Jack Kevorkian must be chortling in his chosen plot of worm-turned earth.

Most people strive to get good at living and rarely think of dying. Death and dying are common themes in Woody Allen films but lately they’re dominating American political debate in Congress and in state houses. After the House Oversight Committee hammered Planned Parenthood recently, The House Republican leadership has adopted a much more aggressive approach: it’s appointed a select committee with subpoena power to investigate the encompassing issue of abortion and the harvesting and use of fetal tissue for medical research, broadly known as women’s health care issues.

But the fractured and immobilized House, its leadership and 247-member Republican caucus held hostage by a wrecking-crew of 40 fringe members, may be forced to alter its profile and agenda as the chaos ripples across the nation and into the presidential contest. The “Freedom Caucus,” the newly sanitized name of the debunked Tea Party, is extracting a high price for a small group—defund Planned Parenthood or shut down the government.

On a parallel track, the right-to-die, or death with dignity, issue has moved cross-country to the Maryland State House following its recent enshrinement into California law, making it the fifth state to authorize self-medicated deaths in extreme cases. Under the new law—old, actually, as far back as 1994 in Oregon—doctors can prescribe lethal drugs to patients near death who request them, in the pejorative known as assisted suicide.

The right-to-die issue returns to Maryland after many false starts and years of discussion with a mighty boost from its passage in California, the nation’s largest and most diverse state, where Gov. Jerry Brown (D) is a former Jesuit seminarian which lends the issue new cachet. Similarly, in the Maryland State House, the three top elected officials are Roman Catholics—Republican Gov. Larry Hogan, who is battling stage-three non-Hodgkin’s lymphoma, and Democrats, Senate President Thomas V. Mike Miller and House Speaker Michael Busch.

Busch was the first jump off center to support the controversial issue, as reported, while Hogan and Miller have lingering religious reservations though personal sympathies toward the choice. The Catholic Church is the most vocal opponent of right-to-die and has fought the issue in states across the country and promises to launch its moral force in Maryland.

But proponents are equally prepared to engage in the battle which could be among the polarizing issues of the 2016 General Assembly. There are more than a half million Catholics in Maryland which straddles three dioceses—the Archdiocese of Maryland, the Archdiocese of Washington and the Diocese of Wilmington, Delaware (the Eastern Shore.)

In the joyous jumble that is politics, social issues trail candidates like menacing rain clouds even though they know they’re toxic to campaigns. The 2016 campaign originally found its voice in concerns over the economy and the frozen income disparity between the haves and the have-nots. But it has abruptly executed one of those unexpected hairpin turns and now embraces gun violence, life-and-death issues of abortion, fetal tissue research and capital punishment as well as contraception and even immigration—all with religious overtones and evangelical fervor. Republicans, and Democrats, in the case of assisted suicide, can’t seem to resist reliving the same battles they fought in the 2012 presidential election.

Maryland’s entry into the assisted-suicide debate is already underway. A preliminary hearing, by a holdover work group from the last session, was recently held in Annapolis where officials from Oregon and Vermont testified on the implementation of laws in their states. A letter from Brown was also read.

On signing the bill, Brown said that he’d reflected “on what I would want in the face of my own death.” He added that he had considered “theological and religious perspectives that any deliberate shortening of one’s life is sinful.” Brown noted that he had also ruminated over Bishop Desmond Tutu’s words, who has spoken in favor of “dignity for the dying.”

There has been expressed concern over possibly indiscriminate embrace of assisted suicide by people who are simply tired of living. But numbers from Oregon produce a different conclusion: Of 1327 prescriptions written since the law went in to effect, 468 persons, or a third of those who applied, changed their minds and decided to continue living. (Insurance payouts are still unsettled. Most policies contain a “contestability clause” denying payouts if suicide is committed during two years from a policy’s effective date. Lying about health conditions is another issue. Oregon law requires a payout for assisted suicide regardless of when.)

Kevorkian’s efforts on behalf of assisted suicide go as far back as 1959 but they really took shape in the 1980s when he began publishing articles on euthanasia. In 1987, Kevorkian, started advertising his services on “death counseling.” Kevorkian, a pathologist who became known as “Dr. Death,” claimed he assisted 130 patients to voluntarily end their lives. He was convicted of second degree murder in 1999 and served eight years in prison. He died in 2011.

By passing off the abortion issue to a select committee, the House leadership effectively removed the issue from the docket of Rep. Jason Chaffetz (R-UT), chairman of the House Oversight Committee, who was viewed as overzealous, on the one side, and rebellious on another. He was accused of protecting the producer of the heavily edited videos on fetal tissue that was used against Planned Parenthood. And he joined the race to succeed Rep. John Boehner (R-OH) as speaker, the fourth Republican speaker in 17 years to step down or be removed—following Robert Livingston, Newt Gingrich and Dennis Hastert.

Congress operates on its own time and tactic, contemptuous of the nation’s clock, calendar or sentiments. Thus, the avenging work of the select committee might be set back by the chaotic state of the leaderless House GOP caucus, which was jolted by the withdrawal of Rep. Kevin McCarthy (R-CA) as Boehner’s presumed successor as speaker.

As the Republican Party unravels, it’s important to keep in mind that members of the House are elected by Congressional districts and are virtually immune to the whiplash of national public opinion or the roiling of issues outside their districts. The apocalyptic behavior in Congress is the result of the redistricting process run amok. Gerrymandering has created safe districts for the incumbents and the current Congressional map will remain intact until at least 2022 when the next round of redistricting takes effect.

Thus, the tyrannical behavior of the 40-member “Freedom Caucus” is unlikely to abate even after a new speaker is eventually elected and the government faces another shutdown over the debt ceiling early in November. That’s exactly what they came to Washington to do.