The libertarians gather in Williamsburg. 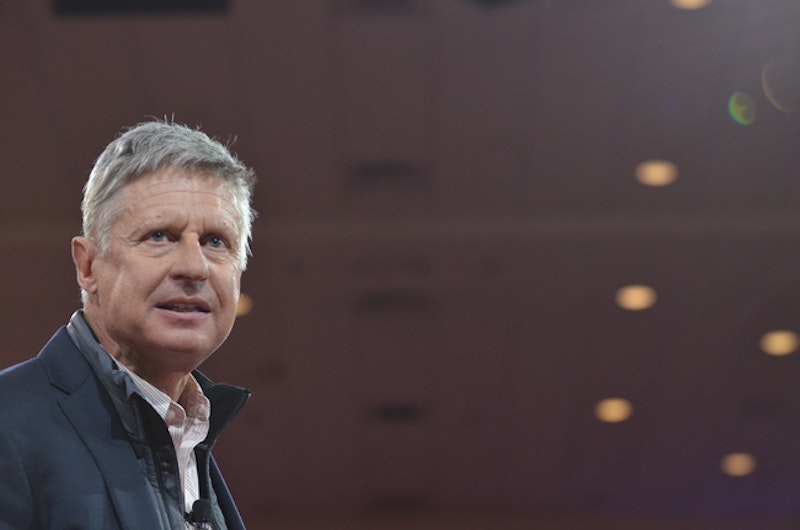 Gary Johnson, not yet an official 2016 Libertarian Party candidate for president, spoke to the two-day LibertyFest 2015 at the Warsaw hall in the Williamsburg neighborhood of New York City this weekend. He defended freedom in all its forms, from the unregulated entrepreneurship of Uber and Lyft to marijuana, reduced taxes, and reduced warfare.

Yet even I—an anarcho-capitalist, as you may recall—am beginning to wonder if it’s necessary to emphasize philosophy for Johnson to shine in the strange setting of the 2016 race. I mean, if the Republicans end up offering someone as odd as Trump or Carson, and the Democrats offer a criminal such as Clinton or a socialist such as Sanders... couldn’t Johnson plausibly just run as the non-weird candidate for whom America has been waiting?

And believe me, I know how strange it sounds to be talking about the Libertarian as the normal one for a change. (Jimmy McMillan, the “Rent Is Too Damn High” guy, spoke on the same stage a couple hours before Johnson, and it’s not clear McMillan is even a full-fledged libertarian—maybe more of a Georgist? Or just an interesting, earnest character?)

Let us assume for the sake of argument that Johnson beats other would-be Libertarian Party nominees including Austin Petersen, who gave an energetic LibertyFest speech about mobilizing libertarian activists as if for war and hopes he’ll one day get the chance to institute a flat tax. Much as Libertarians usually worry about having a candidate who lacks the guts to push their philosophy in a full-throated way (witness their occasional wariness about Rand Paul), might this be a good year in which to skip ideology and use mere sanity as a wedge issue?

Johnson, after all, is a successful, smart, and respected former two-term governor of New Mexico, elected and re-elected as a Republican even in a majority-Democrat state. He never raised taxes even when building new highways, shrank the budget, vetoed more legislation (from both parties) than any other governor, created more jobs than Rick Perry’s Texas despite occasional claims to the contrary, and let the state government workforce shrink through attrition as workers retired—probably the least-painful way to deal with public-sector bloat.

Why even engage in hairsplitting ideological debates? Johnson might just be the best person for the job by any and all reasonable criteria, philosophy be damned.

Of course, he was playing to a tough crowd, many of them non-voting anarchists wary of electoral politics and fond of non-political routes to freedom. Introducing Johnson was Anthem Blanchard, owner of Anthem Vault (and the associated digital currency HayekGold), which offers you a place to store your physical gold—even visit it in person once in a while if you like—while trading it. There’s no reason you can’t hedge your bets with gold while trying to vote your way to a better economy, but hedging may be more up this crowd’s alley than voting.

Blanchard, whose middle name is Hayek, comes from a family of hardcore libertarians. His father, the late James Blanchard, wrote the book Confessions of a Gold Bug and rubbed elbows with Ayn Rand (Rand’s novella Anthem was the inspiration for James’ son’s first name, not to mention the inspiration for the Rush album 2112 and a recent off-Broadway musical). Rand acolyte Alan Greenspan may not have stuck to her philosophy, alas, but he did urge people to buy gold a year ago, so on that, he and the Blanchard family are still on the same page.

As Greenspan has better reason to know than anyone, government’s paper money can be endlessly and often unpredictably printed (and prices thus inflated), but gold is a more or less fixed quantity, a safer store of value, largely beyond government game-playing. And government will play games, except on the extraordinarily rare occasions a Gary Johnson gets elected. We can’t count on his kind coming along too often. It pays to prepare for the worst, which is probably what we’re going to get.