There used to be a House Republican Conference right here. 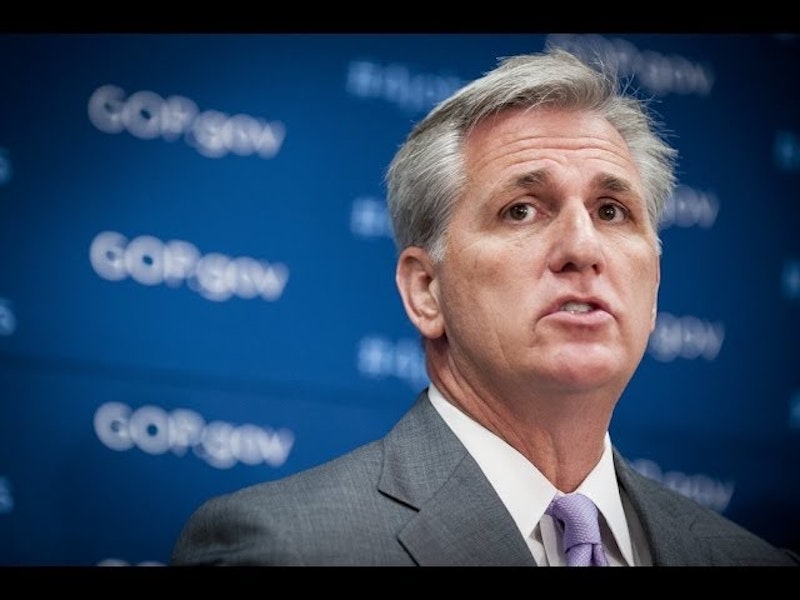 As smoke drifts past, Rep. Cynthia M. Lummis of Wyoming knuckles her eyes. “We can’t elect a speaker under these terms,” Lummis says. “So I think we need a little time, a little space, a little healing. Nothing good ever happens in a crisis.”

Walking stiff-legged through the dust, wandering into microphones, other House Republicans gasp out their commentary. “The room was in total silence,” tensely observes Rep. Robert Pittenger of North Carolina. Rep. Jeff Fortenberry of Nebraska comes hopping forward, swatting at the patches of plaster dust on his blue pants leg. “The first reaction was ‘Wow!’ or ‘What did he say?’” Fortenberry says. His attention veers. His eyes crawl along the wreckage. “The next reaction was: let me sit down and process this while eating lunch at the same time, because this was a shock, a surprise,” he says slowly.

Rep. Peter King of New York emerges from the cloakroom. “It is total confusion,” he announces. “A banana republic. Any plan, anything you anticipate, who knows what’ll happen? People are crying. They don’t have any idea how this will unfold, at all.”

The crisis is that two people in a row have announced they won't be Speaker. The first was the actual Speaker; the second was the man who looked set to take his place. This second man, Rep. Kevin McCarthy of California, was campaigning for the job in the morning, and then in the afternoon he said he was quitting the race. He said the other congressmen kept telling him they needed a new face to lead them. McCarthy sounded light and upbeat, somebody who knows he's being a good sport. But people reacted like a bomb went off. McCarthy's worried about keeping his chin up after going ass over teakettle. Everyone else is stalking through ruins, wondering about the torn future. Or, as Representative Lummis puts it, “Kind of a crazy day.”

The reason the survivors are so shook up is that McCarthy just detonated a key assumption of any functioning governmental system: namely that, the establishment will consent to govern. Usually it's the governed who walk out of the deal. Not in the case of the House Republican Conference. The group's leadership has bailed, fleeing oppression as inflicted on them by the Freedom Caucus. Nobody wants to be a pillar anymore. They know that pillars keep getting knocked over.

That magic moment. The long-faced Congressman looks hard at the camera. He's laying down a big card. “Everybody thought Hillary Clinton was unbeatable, right?” he says. “But we put together a Benghazi special committee, a select committee. What are her numbers today? Her numbers are dropping. Why? Because she's untrustable. But no one would have known any of that had happened had we not fought and made that happen.” He leans hard into the committee's name, because the syllables sound like a big deal: Ben-GHA-zee SPEH-shull, and so on. Conservatives often find a group of sounds, properly combined, to be powerful in the same way that other people will find a thought to be powerful.

The congressman's showpiece is a success. Double-fisted Sean Hannity unbends, acknowledges a truth. “I agree,” says the big guy. “I give you credit for that... I'll give you credit where credit is due.”

The exchange makes sense to the Congressman and the news star. Conservatives are sick of leaders who won't fight the war, these pussies who sit there instead of mussing up the other side. Wrecking Hillary's poll numbers counts as mussing, and that's what the conservatives were sent to Washington to do: damage and obstruct the place's natural denizens so that the creatures can do drastically less harm. McCarthy just displayed a hacked-off limb on a battlefield.

Only a couple of wingnuts could have such a conversation. Since they had it on TV, word reached people outside the movement. These people didn't see House investigating committees as battlefield instruments but as supposedly fair-minded truth-finding instruments. McCarthy became seriously damaged goods, and some wingnuts threw him under the bus—for instance, the special committee's chairman, who said McCarthy ought to apologize for how he sees the committee (“It’s not fair to those four families who lost those loved ones”) and then decided to run for Speaker himself.

Last report is that the chairman isn't doing especially well in the Speaker contest. But what stays with me about all this is that McCarthy took a big hit by being a wingnut in public, and then his fellow warriors rejected him in private, when he was asking around for support. It wasn't so much for the Benghazi remark. Apparently the view of the Freedom Caucus was that he just wasn't all-out enough in confronting the other side.

How do you lead people like that? You don't.