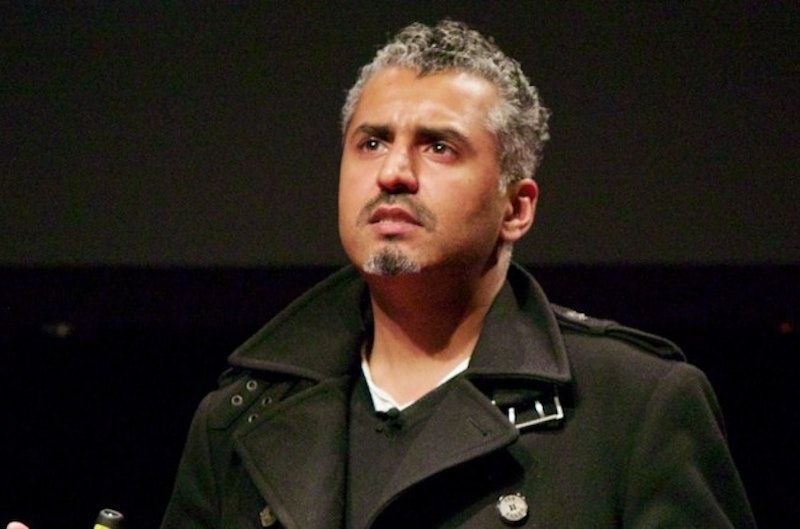 One of the more prominent ideological battles currently underway involves the so-called New Atheists scrapping with the defenders of Islam. The trio of Richard Dawkins, Sam Harris and Bill Maher are the most high-profile atheist critics of Islam, while Reza Aslan is the closest thing to a household name on the opposing side.

Though less well-known than Aslan, Murtaza Hussain, who writes mainly for The Intercept, has lately raised his profile as a vocal opponent of the New Atheists. He recently referred to Sam Harris' co-writer for his latest book (Islam and the Future of Tolerance: A Dialogue Book), Maajid Nawaz, as a "porch monkey." Oddly, The Intercept claims to be a liberal publication virulently opposed to racism, but Hussain trods territory that even race-baiting Breitbart wouldn’t.

There will be no apology from The Intercept, of course, because they don't do apologies. In fact, when Hussain was given a chance to clarify his statement, he tweeted: "To be clear, I will not hesitate to identify someone clearly enriching themselves through native informing as a porch monkey." In another tweet he stated, "calling someone a 'monkey,' as in porch monkey is not a slur." I suggest he call a black person a porch monkey and see what happens.

What Hussain means by "native informing" is that Nawaz was once a Muslim, but is now criticizing the religion's foundations and practices. Black slaves informed on other blacks in the field to get out of the field and into the house, so the theory goes, and Nawaz is now an "informant," turning on his Muslim brothers and sisters for personal gain, although he is only discussing ideas based on his own experience.

But those ideas are dangerous to Hussain and the rest of the crusaders against the New Atheists, because they come from the "inside," and are forged through actual experience, which is difficult to discount. Dawkins, Harris and Maher can be explained away as racists and bigots who don't understand Islam, but not so with the apostate Muslims. Here, the anti-New Atheists turn to a different sort of personal attack as a tactic, just as they have with Ayaan Hirsi Ali. Ali, a native of Somalia and former Muslim, is a forceful critic of women's oppression under Islam who was forced to undergo genital mutilation as a child, while also suffering beatings at the hands of a religious teacher.

Despite Ali's undeniable credentials as a valid critic of religion, she’s routinely attacked on the left. Nicholas Kristof, writing for The New York Times called her critiques "strident," which is condescending, given that Kristof was presumably not mutilated or beaten himself in the name of religion as a child. Continuing, he wrote that Ali apparently hasn’t yet outgrown her teenage rebellion period. And Kristof's attack on Ali is actually one of the milder ones.

Generally, it's fair game on the left to viciously attack "native informers" as Nawaz and Ali. Hussain gets away with calling a political opponent a porch monkey because he’s set up the construct that Nawaz is an Uncle Tom. As he’s betrayed his own people, it’s somehow justifiable to tar his reputation with racial slurs that aren’t acceptable in public discourse. Imagine the outrage from the left if Breitbart or The Blaze called someone with dark skin a porch monkey. The hypocrisy is just overwhelming.

Going back a couple of years, I found an article written by Hussain in Salon in which he claimed that Sam Harris had slurred famed Pakistani crusader Malala Yousafzai. Harris' words: "She is an extraordinarily brave and eloquent girl who is doing what millions of Muslim men and women are too terrified to do—stand up to the misogyny of traditional Islam."

In Hussain's twisted world, calling someone brave and eloquent is a slur, but referring to a man as a porch monkey isn’t. And it's simply because they say it's not, contrary to all evidence. Those who oppose the New Atheists on the far left have constructed a parallel universe for themselves, where they make all the rules. They get to do this because they are morally superior to everyone else. They’re special people who’ll do anything to avoid getting into an actual debate of ideas, because deep down, I suspect, they know their ideas cannot hold up to serious scrutiny.