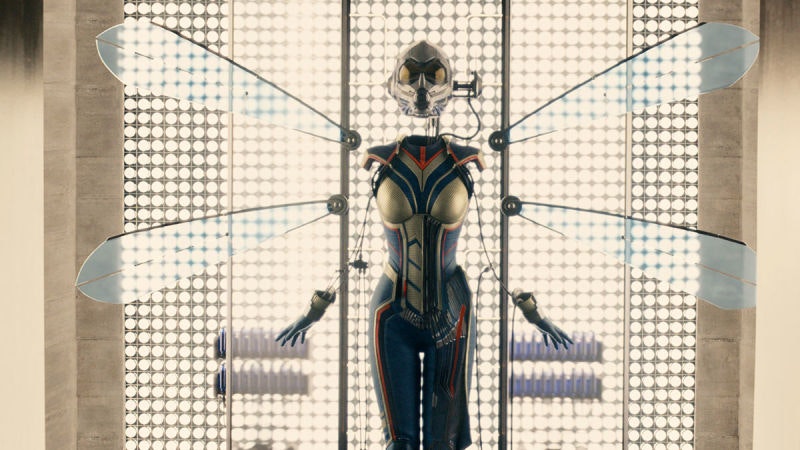 With Bernie Sanders’ rise getting turned into a comic book (from StormFront Entertainment, no connection to the neo-Nazis), you might well wonder if there were other political goings-on in the comic book business in the past few days, during the hubbub of New York Comic Con.

Fanatical, score-keeping feminists (not that I usually encourage them) might’ve noticed that Marvel’s first solo-female superhero movie, Capt. Marvel, has been pushed back from 2018 to 2019, to make way for an addition to Marvel’s schedule: a female co-led film, Ant-Man and the Wasp. Two cosmic steps forward, one microscopic back?

I might be mildly disappointed by all this if I were Scarlett Johansson, whose Black Widow character could easily have been given official co-lead status in last year’s awesome, 1970s-spy-thriller-like Captain America sequel. In fact, if I were Johansson, I would probably challenge Wasp actress Evangeline Lilly to a fight over it (a naked fight).

However, Marvel’s schedule shuffle also means the (solo black male) Black Panther movie arrives several months earlier than previously expected, in February 2018. But is that a demotion from its previous summer-blockbuster slot? The new writer of the Black Panther comic book, Ta-Nehesi Coates, should probably address that question in a column.

Also rumored to be lost in the Marvel shuffle altogether is the Inhumans movie, last known to be scheduled for 2019 but now perhaps on the chopping block because promoting the (monarchist, moon-dwelling) Inhumans was a pet project of Marvel print-and-TV head Isaac Perlmutter—to whom the booming movie division, run by Kevin Feige, no longer has to answer. Perlmutter wanted us all to love the Inhumans so they could serve as replacements for the mutants in the X-Men movies at Fox, over which he also has no control.

Furthermore, Perlmutter canceled the Fantastic Four comic as an apparent protest against the unpopular Fox movie version of those characters. So partly by his own hand and partly by others’, Perlmutter’s sphere of control seems to keep shrinking. Will he become ever more villainous as he becomes more isolated?

I realize that bit is more office politics, but I totally predicted the Marvel film/TV split would deepen. I’d guess it now renders very unlikely the graduation of the Defenders (that is, the Marvel characters now appearing in Netflix series) to become the New Avengers, as they sort of did in the comics. No skin off Feige’s teeth, either, since even if he uses no Netflix characters and all the movie actors seen so far walked away (or got bumped off in next year’s Captain America: Civil War), he surely knows he could still build a respectable New Avengers team out of the soon-to-be-seen new film versions of Doctor Strange, Spider-Man, Black Panther, and Capt. Marvel.

There are a lot of these characters. A friend of mine once found a discarded computer hard drive from the Marvel offices, and it had a list of about 5,000 characters on it.

Like American politics, the comics industry is still dominated by a fragile but large duopoly. In other words, I should at least say something about DC Comics as well, and my main thought (with some prompting from my friend Bryan Patrick Harris) is that it’s odd the animated Batman: The Killing Joke movie may end up being rated R. I never wanted to turn into one of those people who asks “Won’t someone think of the children?”—especially since I don’t want any—but Batman being increasingly unsuitable for kids is a little odd, at least as odd as ribald Muppets.

It’s enough to make one suspect most of the fans of these characters are not kids at all but instead are now reclusive, nerdy fortysomethings who rarely leave their apartments and spend a lot of time arguing on the Internet. I find that hard to imagine.