Do You Want to Call Out Calling Out Privilege

Or do you want to fight the police state? 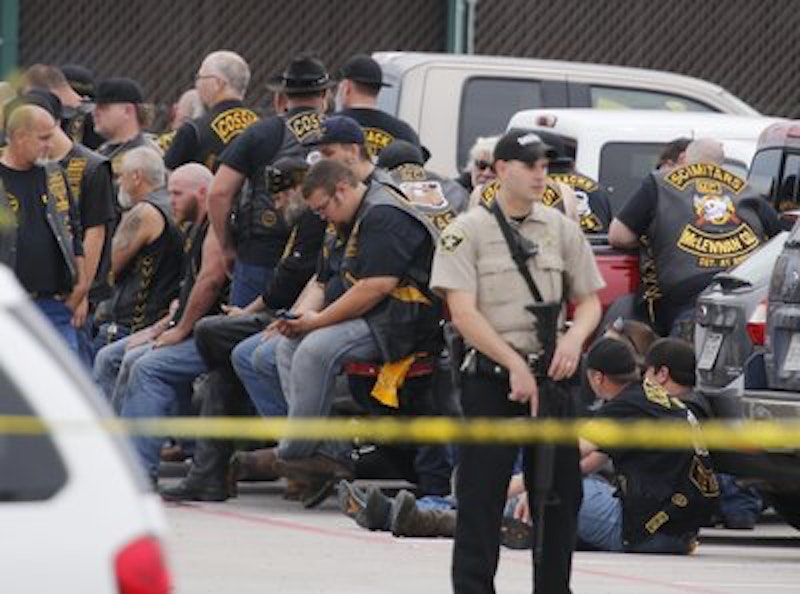 Are discussions of privilege interfering with the push for criminal justice reform?

Freddie deBoer argues that they are. In a recent post, deBoer says that, while analyzing privilege has its uses, it can ultimately interfere with opposition to injustice.

DeBoer points to the framing of a 2015 incident in Waco, in which a conflict with bikers ended with nine dead and 20 seriously injured. Shaun King, a well-known Black Lives Matter activist, argued that the incident shows how the police state is racist. Because the bikers were white, King says,  "Not one person has been charged with murder."

King's argument was one widely bruited about on social media. But, as deBoer points out, it's fundamentally flawed—if, as appears likely, the bikers didn't do much, if anything, wrong, and the deaths were caused by the police. Rather than a story about white people getting away with murder, deBoer says, this is probably a story about a stigmatized group (bikers, many of whom, as deBoer says, were Hispanic) being targeted, harassed, and possibly even murdered by police. It's a narrative about the out-of-control police state, rather than one about white privilege. Therefore, deBoer concludes, calling out privilege interferes with calling out the police state. You can't do both.

Here deBoer's case is a lot weaker. He does raise a number of examples of left activists or pundits supporting incarceration in one way or another. For example, he points to carceral feminism—the tendency by some feminists to work with the state to increase penalties for violence against women, or advocate for criminal penalties for sex work.

But carceral feminism isn't based in the relatively new left rhetoric of calling out privilege. Rather, segments of the feminist movement have long worked hand in hand with police and the law—most notably in the prohibition movement, when feminists teamed up with evangelicals to ban alcohol, and in the 1980s, when Andrea Dworkin and other feminists worked with religious conservatives to try to pass laws against pornography. This isn't a case of a group on the left distracted from anti-police state policies by privilege rhetoric. It’s a case of a faction on the left that’s long been ideologically and rhetorically committed to police state policies. You're not going to get carceral feminists on board with anti-carceral policies, no matter how you fiddle with your rhetoric.

In addition, if you look more closely at King's piece, you'll see that he's not actually using privilege rhetoric instead of critiquing the carceral state. He's using the frame of privilege as a way to analyze and criticize the police. After talking about the bikers (who he erroneously describes as being let off leniently) he pivots to talking about black people who faced abusive police interventions. He is criticizing the prison system for being racist—which it is.

Of course, the prison system doesn't just affect black people—as King knows, since he's been active in trying to draw attention to the case of Richard Glossip, a probably innocent man on death row in Oklahoma. The criminal justice system in this country is unjust because it’s racist, but its injustices aren't all reducible to racism in every instance, as the bikers in Waco can attest.

But does that mean that talking about racial privilege weakens opposition to the police state? DeBoer suggests that a broader, less identity-politics based stand against incarceration would be better. The police state, he says, "is so powerful, and so deeply embedded into our system, that it will take a genuinely unified front to oppose it." That sounds like a libertarian approach to dismantling the police state, in which activists would try to oppose carceral policies on the basis that they violate everyone's rights. Acknowledge, of course, that some groups are targeted more than others, but build your opposition on the broad, universally accepted grounds of justice for all.

This sounds reasonable. Coalitions should be broad, and should bring everybody on board they can.

The problem is that libertarian arguments against imprisonment have been around for decades, and their accomplishments aren’t impressive. Broad-based, universal calls for justice did not create an anti-carceral mass movement. Race-based calls for civil rights for black people did. The anti-police-state movement we've got now is Black Lives Matter—a movement whose leaders and visible activists (like King) use rhetoric about racism and privilege to indict the justice system, raise awareness, energize protest, move prosecutors to indict police officers, and force the Democratic party to acknowledge them. There’s no passionate, committed constituency for fighting on behalf of criminals and the incarcerated. But there is one to fight racism.

King messed up in attacking the bikers; deBoer is right about that. But I'm not convinced that that error is indicative of a need for a widespread change in tactics in confronting police violence. DeBoer frames privilege discussions as frivolous and pointless ("What’s the priority? Scoring the purely rhetorical point of identifying privilege? Or actually transforming the system that hurts so many poor people and people of color?") But the current strategy pointing out racism in the criminal justice system has been, by far, the most powerful challenge to the police state in the last 40 years, at least.

Privilege as a frame isn't perfect. But it’d being foolish to toss it aside as ineffective in theory when, in practice, it’s been so much more successful than the alternatives.