Where Have You Gone, Dwight Eisenhower?

A president with the balls of Putin. 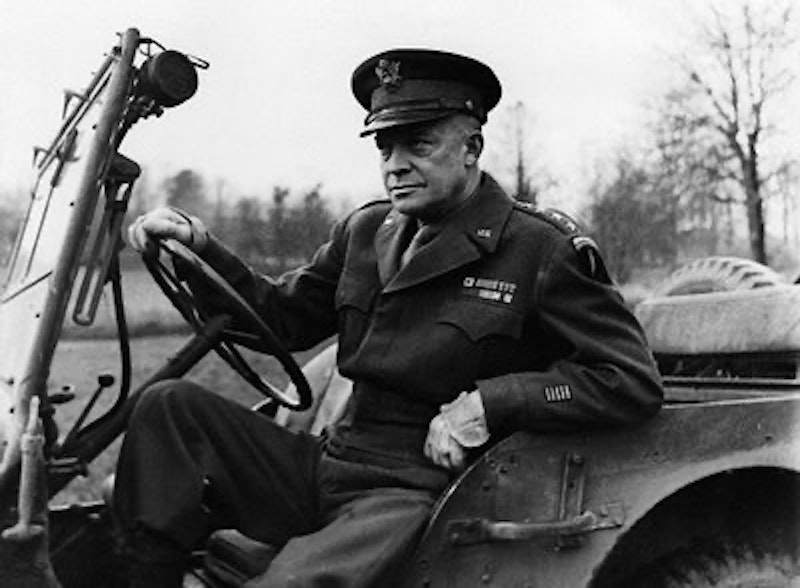 There are numerous lessons to learn from the recent Russian blitzkrieg against the various mercenary forces posing as “jihadists” in Syria, but the most obvious one is the very clear difference between Russian and American military strategy. When the Russians deploy troops, they go in hard and fast, with very specific goals. The idea is to get the job done and get out with a minimum amount of casualties, avoiding collateral damage as much as possible. The Red Army learned from its experience in Afghanistan.

When Americans scratch their heads and wonder “Why can’t our military do that?” they’re missing the point. The American military does not exist to defend our “freedom,” whatever that is these days. Our armed forces are not protecting the homeland. Our Southern border is wide open. Our military is not purposed with any clearly defined victory, and the concept of any kind of exit strategy is completely alien to the thinking of leaders. In case you haven’t noticed, while America is eager to wage wars, we never actually win them.

That’s because the purpose of the American military has nothing whatsoever to do with traditional military goals and objectives. The true purpose of the American military is to sustain and enhance shareholder value for Raytheon, Halliburton, Kellogg Brown & Root, Lockheed-Martin, Boeing, Northrup Grumman, and the vast legion of other corporate entities comprising the industrial aspect of our overwhelming Military Industrial Complex, or MIC. Readers of a certain age may recall the farewell address of President Dwight Eisenhower, in which he very clearly warned against allowing the MIC to acquire too much power. He may as well have saved his breath. Eisenhower was the last truly great American president, a real patriot, the closest we’ve had to a Vlad Putin.

Since his departure, the Oval Office has been occupied by morally degenerate tools of the oligarchs, with the notable exceptions of JFK and Jimmy Carter. JFK was unquestionably morally degenerate, but he was no tool; hence, his appointment in Dallas, the original Nightmare On Elm Street. Carter was an exceptionally moral man boxed in by the oligarchs and undermined at every turn by CIA, the ultimate instrument of American oligarchy, the bastard child of Wild Bill Donovan’s OSS and Reinhard Gehlen’s Nazi intelligence network. Who sleeps with dogs, awakes with fleas.

Americans need to ask themselves if they really need this monstrously bloated, profit-driven military machine that exists solely to create and sustain conflicts worldwide for the single purpose of inflating profits for defense contractors. One way to start would be to ban retired military personnel from becoming lobbyists. That could be accomplished with a simple swipe of the Presidential pen. Unfortunately, that signature would almost certainly be followed by a love letter straight from the heart of Langley, delivered by a lone nut with a mail-order rifle and a copy of Catcher In The Rye.

Perhaps Putin could lend us a hand with a little regime change here. We could sure use it.