His advice to fight back against armed killers is on the money. 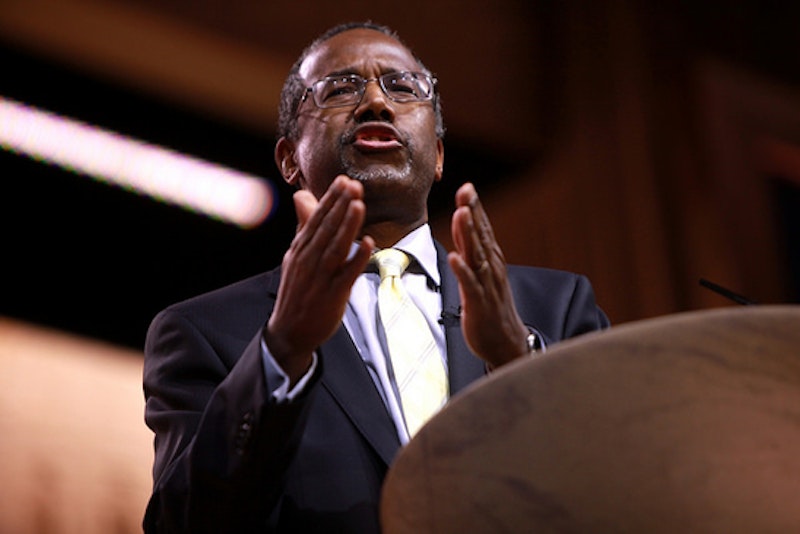 Ben Carson, addressing the recent murder of nine at a community college in Oregon, recently took a lot of heat for saying that he wouldn’t have been as passive as the people in that classroom. What he would’ve done, he said, was confront the gunman and instruct the rest of the people trapped in the room to attack him. Some interpreted this as an insensitive attack on the bravery of the victims, while others pointed out that talk after the fact is cheap, and that Carson's macho sounding words amounted to little more than bluster.

"I would not just stand there and let him shoot me," Carson said. When the criticism came, Carson clarified that he wanted "to plant in people's minds what to do in a situation like this because unfortunately this is probably not going to be the last time this happens," and he’s right. As the U.S. is experiencing a mass shooting every 64 days over the past four years, we can expect another one in December, if not earlier. As for the idea he wants to place in people's minds, it’s indisputable that people would be better off charging the shooter in such a situation.

Heather Digby Parton addressed the controversy in Salon, where she wrote about the one person who did stand up to the murderer, Chris Mintz: "One of them, a veteran who tried to keep the shooter out of the room, did live, so perhaps Carson can tell him all about what he did wrong when he’s out of the hospital." But Carson obviously would not be telling Mintz this, because Mintz fought the killer, which is precisely what Carson is recommending. Carson would congratulate him.

Donald Trump had chimed in to support Carson on this issue, so Parton addressed them both: "Neither of these men are trained military veterans or have any professional experience with firearms—except in their own Walter Mitty fantasies. These comments are embarrassing for both of them." Once again the writer completely gets it wrong. When the issue is life or death, nobody with "proper" training may be in the room, so you have to go with what you've got. "Professional experience" with firearms is also not a prerequisite for disarming and subduing an armed individual. Parton is writing about preparing for an emergency that will occur sometime in the future rather than addressing a dire emergency requiring immediate action.

At The New York Times, things weren't much better. "The fact that an Army veteran who did try to stop him was shot multiple times and remains hospitalized underscores the risks of attacking an armed attacker, as numerous critics pointed out Tuesday," wrote Alan Rappaport. First, Carson wasn’t saying that his advice was without risk—the level of risk goes through the roof as soon as the guy with the gun arrives and you need to reduce it. He said it would lower the total fatalities, because a gunman cannot shoot everyone charging him at once. Also, Mintz—the fighter—lived, while nine who didn't fight died, but Rappaport highlights Mintz's risk level.

This isn’t to denigrate those who died or question their character. These mass shootings are going to call for some pragmatism now because they are not going to stop. Combine the American thirst for fame—regardless of its provenance—with the very high expectations for success in this country that many troubled young men cannot come close to meeting, and then throw in the easy availability of firearms and you get a powder keg.

It’s now clear that the GOP will block even the most modest attempts at gun law reform, and the American public isn’t that interested in the topic. Sadly, since the shootings cannot be stopped in the foreseeable future, it now becomes necessary to ponder how to handle these situations once they have already occurred.

And what you should do is fight the man with the gun, because Ben Carson is right in this case that he can't kill everyone all at once. The best-case scenario in Oregon would’ve been when Chris Mintz tried to stop the killer from entering the room, others would’ve come forward to fight with him. Mintz is a trained military vet and acted like one, but he needed help from anyone at that point, and that was probably the best chance to stop the killer.

My defense of Carson's statements may seem bizarre, but they’re grounded in reality. When you find yourself in a room with one of these armed lunatics, you’re probably not going to get out alive by just hoping. I'm in favor of taking steps to curb the gun control culture in the U.S., but as a practical person, and not seeing any change coming, I need to think about how to deal with the current harsh reality.