A look at who's shooting whom as the work week kicks off. 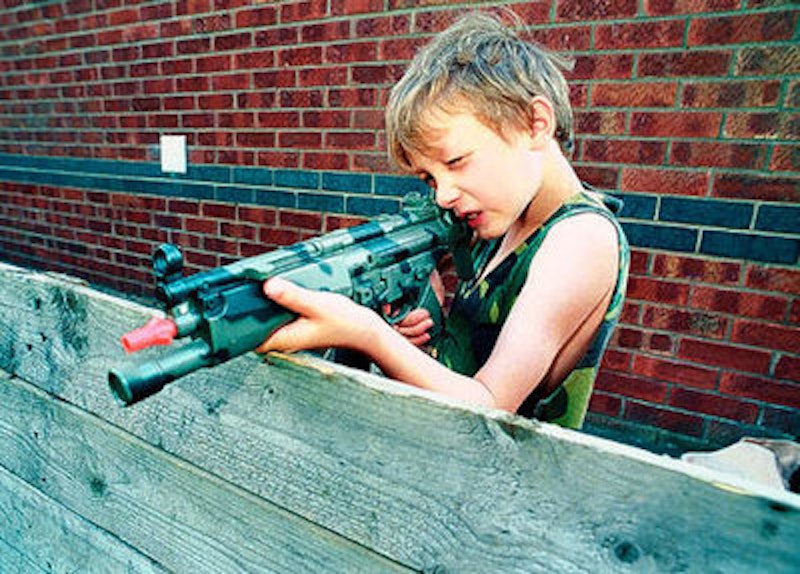 Monday's news that an 11-year-old boy in White Pine, Tennessee had fatally shot an eight-year-old girl wasn’t that surprising. I'd liken it to 9/11, which stunned me at first, but failed to surprise me. Some things have the feeling of inevitability about them, though it’s sad to admit I feel this way about such a tragic event. And that goes for the recent shootings in Oregon as well. I'm inured to these obscene events at this point, as I'm assuming are most Americans. That’s not a good sign.

Now we have absurdity of a pre-teen boy charged with the murder of another child, all because she allegedly wouldn't show him her puppy. The murder weapon was the father's 12-gauge shotgun, so if anyone should get charged with murder, there's your guy. But that's not the way it works in this country. I wouldn't even be surprised if people rallied around the dad, claiming it was just a horrible accident, because I've seen it so many times before.

Reading about this spurred me to check out the other gun news last Monday, and it wasn't pretty. On the depressing theme of children gunning down other children, there was the news that an 11-year-old accidentally shot his brother on a target-shooting outing in eastern Ohio. Three loaded weapons were left on a picnic table, the boy picked up one and it accidentally discharged into his 12-year-old brother's head, killing him. The adult who was with them is responsible for one boy's death, and the destruction of the life of his surviving brother, but Carroll County Sheriff Dale Williams said no charges were being filed against him at this time.

Here in the Richmond, Virginia metropolitan area, a man held up a Wal-Mart at gunpoint on Monday morning, prompting a 73-year-old woman to go out to her car to get her handgun. She was going to take care of this situation herself, even though the robber had already fled the store. No need for the police when she had a gun of her own. The police found her walking around the Wal-Mart, openly brandishing her weapon. After initially cuffing her, they released her, and no charges will be filed, even though she could’ve shot someone accidentally, and had no business attempting to apprehend someone who hadn’t harmed her. Wal-Mart is the place, if you recall, where a two-year-old boy fatally shot his mother with her gun in December of last year. The father said of the mother, after the shooting, "She was not the least bit irresponsible," and the scary part of it is that he probably still believes that.

Had you picked up the Florida Times-Union on Monday you could’ve learned about Elgardo AJ Garcia, who decided to smoke marijuana in the morning with his girlfriend, Jaylene Cruz. They decided to have a little fun with a loaded .40-caliber Glock handgun by taking turns pointing the weapon at each other. Garcia was rolling a joint and pointing the gun at Cruz and it went off, killing her, even though it's not easy to discharge a Glock .40 accidentally. The couple recorded their "gun fun" on Snapchat before Cruz' death.

Returning back to Ohio, an Arcanum man shot himself while cleaning his gun and is now in critical condition. I read about this happening all the time. Sometimes apartment dwellers cleaning their weapons will shoot right through the wall and hit their neighbor too. They don't know how to clean a gun, and have never been required to do so.

The above accounts are a sample of the gun incidents reported on just one day. There were more. I've experienced gun insanity as well. A Charlottesville coffee shop I used to frequent was robbed by someone wielding a kitchen knife one day. When an acquaintance who was always armed found out about this, he bemoaned that fact that he wasn’t there to stop it. I'm glad he wasn't. Who knows who he would have ended up shooting over something like the $80 that was stolen. I just don't need any vigilante heroics from gun owners dying to be the "good guy."

You're not supposed to talk about any kind of "malaise" in this country, because that's generally seen as being un-American, at least in certain political circles. Jimmy Carter could attest to this, but guns are looking like our malaise now, one that will continue. The mass shootings keep happening, babies shoot parents, children shoot other children, but no action is taken, because "stuff happens."

Obama goes on TV after the mass shootings and talks about doing something, but most people understand by now his words will not translate to action. It's like when Carter made his energy speeches. People tuned him out. Mandatory training for gun owners could stop a lot of the accidents, and prosecuting adults who allow children access to guns would send the message that these incidents with kids are not just "accidents." That’s a good start, but even these moderate measures appear to be political impossibilities. There's a fetishization of guns that's crept into a big enough segment of the American consciousness now that all hell breaks loose whenever there's just common sense talk of gun legislation. So we'll continue to live with our malaise, feeling it like a dull aching pain.