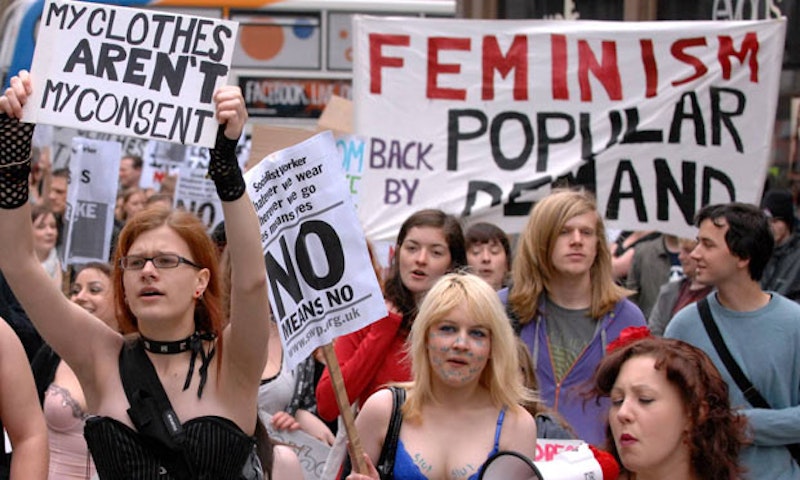 Nothing pisses off feminists like accusing them of being insane. That is, of course, because they know it to be true. Nothing burns like reality.

• One prominent feminist, Brianna Wu, who has called herself “the Godzilla of tech feminists,” posted a photo of what is almost certainly her friend and fellow writer/activist Carolyn G.’s self-mutilation wrist scars—while claiming her friend is a “hero” for purportedly sustaining the injuries by leaping in front of a car to rescue a dog, as one of my fellow anarcho-capitalists informs me.

• Feminists have reportedly been urinating on themselves after being duped by pranksters into thinking taking a pants-soaking “piss for equality” shows solidarity with rape victims. Or maybe no one was actually taken in by the prank and even the second wave (so to speak) of photos were all hoaxes.

• But lest we think they all must be hoaxes, remember the very real recent feminist craze of “free bleeding,” letting one’s menstrual blood run down one’s legs unimpeded (even during a marathon in one case). Don’t say it can’t happen again.

• If you want to know whether you can freely talk about these sorts of absurd incidents, know that the University of Manchester has decided to hold a debate on the question of whether feminism and free speech are compatible—oh, but two of the debaters who were to argue the question (lesbian feminist anti-violence activist Julie Bindel and gay conservative Milo Yiannopoulos) have been banned, on the grounds that their views might make feminists in the audience feel that the debate is not a “safe space” (since Bindel thinks trans ex-men are still men and Yiannopoulos thinks biology is the source of gender).

I think their exclusion from the event tells us the answer to the debate question.

To be clear, I’m not saying all feminists are insane. I was totally with them for, like, one and a half waves. And I’m certainly not saying the majority of the broader female population is insane. However, the stats will bear out the claim that people with severe emotional instability, self-mutilation habits, eating disorders, and so on are more likely to be female—and indeed are found in extraordinarily high numbers here in New York City in particular.

Most likely, it’s a combination of the stress, the large number of people relocated here precisely because they didn’t fit in elsewhere, and the ready social acceptability of participating in what might broadly be called “therapeutic culture.” There are still parts of the country where being neurotic is taboo, but here Woody Allen is (or long was) a hero.

Then add to that the taboo in East Coast urban leftist social circles against being normal and bourgeois. It’s a formula for the bizarre.

Admittedly, the more rare crazy males tend to do more damage. They don’t just tweet absurdly—they like punching people in bars and throwing objects at police cars, etc. But for purposes of more subtly shaping the culture—for gauging all those things you can’t just call the cops for—you have to look skeptically at many activist females, especially the young ones.

When emotionally fragile young women, to whom leftist ideology is not yet a manifest cliché, try to make inroads into a subculture full of males who are especially combative and competitive—like, say, videogame players—it’s a disaster waiting to happen. It’s almost as if the new default attitude is not “Women are equals” or “I am woman, hear me roar,” but “I just dare you to say I’m being psycho—I DARE YOU!”