Where Are All the Protesters?

This is the new America. 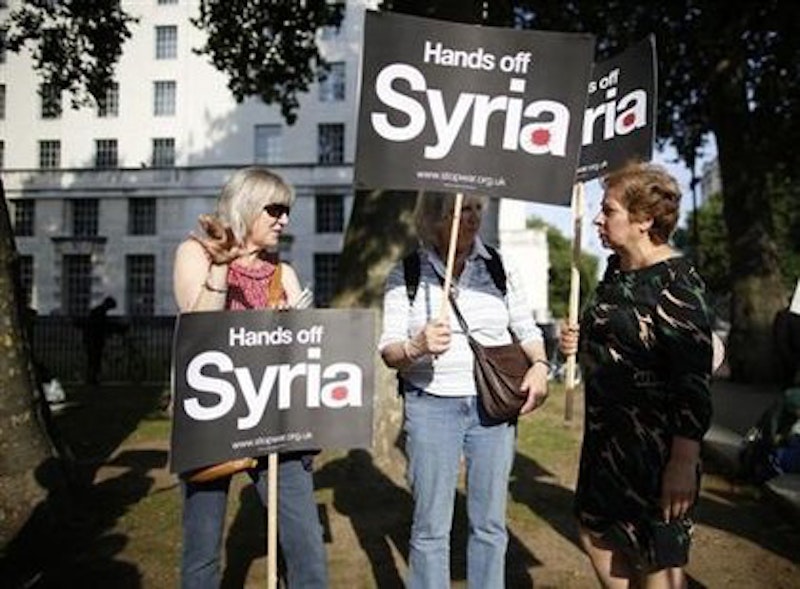 Last week I really wanted to make a sign that said “I Am War Weary,” metro into D.C. and plant myself in front of the White House. I had visions of me, a solitary figure, standing firmly, protesting yet another U.S. military intervention. I was angry but didn’t know what to do with the anger. Calls to my Congressman didn’t seem to satisfy me.

I wanted to follow my social urge and not stand on the sidelines on this one, but I was also a bit scared to proceed alone. Could I just traipse into D.C. a lonely female demonstrator, safely able to exercise my freedom of speech? Would I be arrested? Would people harass me? I tried, online, to find an existing protest or one that was being planned. Nothing. Not a mention anywhere of Americans taking to the streets.

I did find numerous news reports and footage of thousands of protestors in London marching and carrying banners that said “Hands off Syria” and “Shame on you U.S.A.” I mentally gave kudos to Parliament for the stunning defeat against Prime Minister Cameron, keeping Britain from endorsing any military action in Syria.

My Internet surfing did come up with a recent Gallup poll indicating that 68 percent of Americans say the United States should not use military action in Syria to attempt to end the civil war there if diplomatic and economic efforts fail, while 24 percent would favor U.S. military involvement. I guess this is the new America. We protest by sitting in our living rooms watching reality shows until a pollster calls to ask our views on foreign policy. As the world debates the efficacy of a military strike against the al-Assad government in response to its use of chemical weapons on civilians, it’s clear that our people are weary of war but perhaps too weary to rebel against it.

As reporters were at the Rose Garden, waiting for President Obama to speak on Syria, the sounds of anti-war voices could be heard nearby. The reporter briefly mentioned that protestors had been outside the White House all week. Why did the networks make no mention of it? Why could I not find information on it and unite with them? Was the media told by the Obama administration that mum’s the word?

Protest movements in America reflect and influence mainstream politics. In order to understand our political system—and our social and political world—we need to pay attention to protest. I’m making my sign and following the social urge to join others this weekend in D.C. This time I’m not standing on the sidelines.