Wacky GOP is wasting time on nonsense like impeachment dreams. 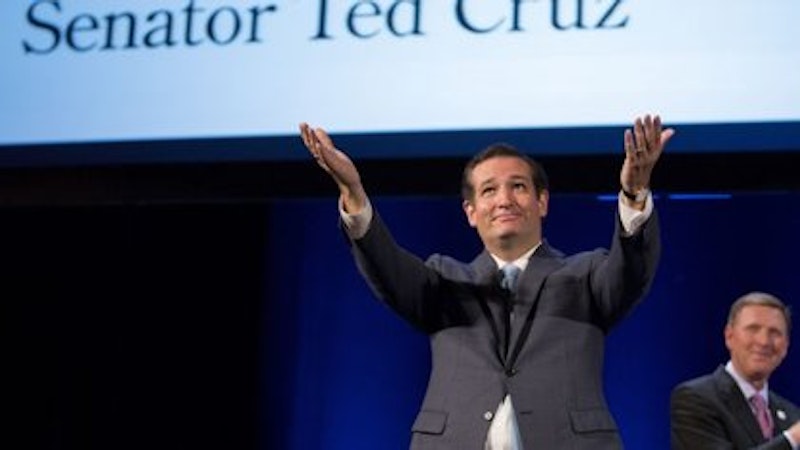 The current Republican Party comes in two flavors: nuts and nuttier. The first order involves the poseurs who are peddling anti-Obama poison to ingratiate themselves with the GOP’s purity-over-party base. And the second includes the vast constituency of the brain-dead who’re buying into it. As if further proof is needed, a recent Kaiser tracking poll reveals that 44 percent of Americans believe that Obamacare has already been repealed.

Sen. Ted Cruz (R-TX) is the Elmer Gantry of the anti-Obamacare lobby. His pin-striped populism is viewed largely as an attention-getter for president. Cruz knows very well that it’s almost impossible to defund the Affordable Care Act, yet he’s rousing the Tea Party-tainted GOP base by promising to do just that. He’s willing to shut down government to make the point. Many in his party think he’s wacko.

The supporting characters in this theater of the absurd are Sen. Mike Lee (R-UT) and Sen. Rand Paul (R-KY). Lee and Rand are both Tea Party poster boys with superior Heritage Foundation ratings for their conservative voting records. Lee, in fact, maintains a four-color ad, essentially a picture of himself, on the Drudge Report that allows readers to sign a petition to repeal Obamacare. (“Whereas, the Affordable Care Act, also known as ‘Obamacare,’ is an unconstitutional, economically devastating, and poorly implemented, big government policy,” etc.)

Reality check: Another Kaiser poll shows that 57 percent of those polled oppose using the budget process to defund Obamacare. Nonetheless, the program remains statistically unpopular if not misunderstood. Forty-two percent have an unfavorable view while 37 percent approve of the health care program.

And another primal scream that’s certain to cause a foam-at-the-mouth roar among GOP’s gaping primates (Mencken’s phrase for the ilk) is the banshee cry to impeach President Obama. As is customary in such fits of hysterical disgruntlement, the two have elided into a whipped up right-wing frenzy.

Soon its doomsday in America again. The country is being set up for another round of hostage-holding at the familiar intersection of three cliff-hanging events on or about October 1—Obamacare, the debt ceiling and the continuing resolution to fund government.

On that date, the state exchanges are scheduled to open for the purchase of mandatory health insurance; the federal government runs out of money to pay its bills and could default on its financial obligations; and the continuing resolution is necessary because Congress has failed for several years to pass a budget. Two of the three could cause a government shutdown while the attack on Obamacare is just plain nonsense. Meantime, there is a temporary distraction over a couple menacing but empty words.

“Defund” and “impeach” are the Congressional summer vacation’s code words. They are not interchangeable but they evoke the same elemental emotions. And in case the airborne message eludes anyone, lots of people resist and resent Obama because he’s black (even though he had a white mother). Remember, today’s Republican party is basically a collection of Dixiecrats and a few fly-over Rocky Mountain States. That’s hardly a heady mix for an advanced spelling bee.

Defund means exactly that; to remove funds. In the case of Obamacare, it can be done in only one of two ways—by presidential veto or by repealing the program. Obamacare, in the arcane inflections of bureaucratese, is a “mandated” program that must be funded, period. The only way to eviscerate the health care program or eliminate the mandate is to repeal Obamacare. And that won’t happen because Obama will veto any bill that would reverse the signature domestic achievement of his Administration, which, by the way, has been upheld by the U.S. Supreme Court.

Impeach is a little more complicated but just as foolhardy an adventure. A couple of Republican back-benchers are playing to the revival-tent crowd over the threat that bedevils almost every president, but the party’s leadership wants the red herring to go away. Michigan Rep. Kerry Bentivolio (R) says impeachment “would be a dream come true.” Texas Rep. Blake Farenthold (R) says the House has the votes to impeach. And Sen. Tom Coburn (R-OK), who claims close friendship with Obama, says the president is “perilously close” to meeting the standards for impeachment.

Article II of the Constitution is abundantly pellucid on the subject of impeachment. But as usual, the intent of the nation’s guiding document is in the eye (or the tinfoil beanie) of the beholder. To wit: “The president and vice president, and all civil officers of the United States shall be removed from office on impeachment for, and conviction of, treason, bribery, or other high crimes and misdemeanors.”

In today’s Twitter-y universe of shorthand communications, the word impeach has become a synonym for “throw out,” as the Tea Party masses would have it. But in the true legal sense, an official can be accused of wrongdoing (impeached) which may or may not lead to removal from office (i.e., President Bill Clinton).

Obama could be considered guilty of all sorts of wrongdoings to those who wish him ill. But within the Dixiecrat flank of the GOP, Obama’s “high crimes and misdemeanors” involve none other than being black. The grounds for impeachment could be stretched, of course, to include treason by way of making certain that every American has health insurance to assure a long and healthy life without burdening emergency rooms and passing the tab on to others.

While all the commotion over Obamacare and impeachment is dividing Republican members of Congress, there are several Republican states that are joining the effort to block Obamacare by thwarting the mechanics of its implementation. They are saying, in effect, that since Obamacare is a federal law let the federal government enforce its provisions instead of handing the job to the states. Missouri, for example, has barred local officials from doing anything to help effectuate the law.

Congress returns to Washington next week for another installment of Kabuki Theater. It will have just about three weeks to resolve the looming financial crises of its own making as well as to defuse the phantom issue of defunding Obamacare. It’s important to recall that the House of Representatives has already voted 40 times to repeal Obamacare. The House needs the practice. It’s done little else.

A sampling of polls ranks Congress’s favorability rating between eight and 13 percent and, based on performance, the wonder is how it’s that high. Speaker John Boehner (R-OH) is more concerned about retaining the speakership that he is about America. Many House Republicans on the right flank worry more about having a primary election than about the health of their party.

The remarkable thing is that the dénouement of this lunacy resumes just a couple of months before the 2014 primary season begins. Democrats are 18 seats away from recapturing the House and Republicans are five seats from claiming the Senate. If the roles were to reverse, the nation will have gotten exactly nowhere.