Why Are You Calling Out Fat Lesbians?

Is there a real issue here other than douchey blogging? 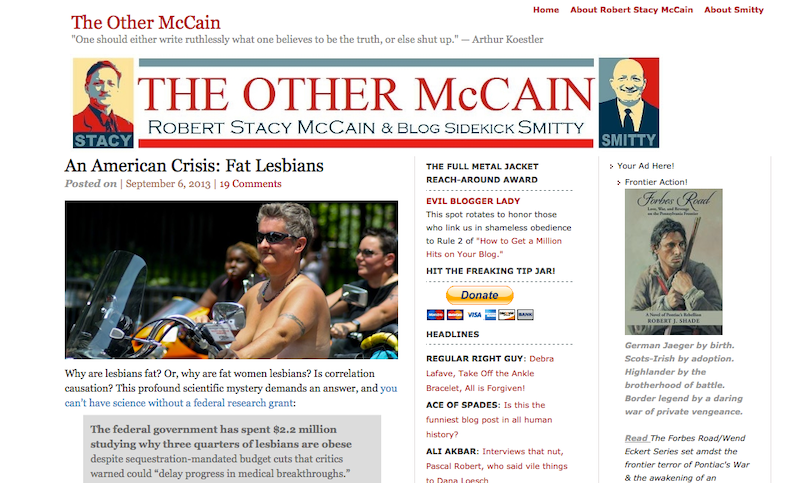 I’m not exactly sure what the deal is with this guy “The Other McCain,” but this post titled “An American Crisis: Fat Lesbians” is pissing me off on so many levels. One of the reasons: I hate even linking to it. In a related matter, we just talked about linkbait trolling, wherein someone writes a tabloid-worthy headline just to get hits on the story by angering people. And if that’s the case, well, here I am, swallowing the bait, hook, line, sinker, and bullshit.

Here’s how it started. This blogger, whose illustration looks unflatteringly like a certain unpopular former Nazi party leader, found a marginally more legitimate yet still bit bizarre article featuring a wacky photo called “Feds Spending $2.2 Million to Study Lesbian Obesity” (sub-hed: NIH warned sequestration budget cuts could delay medical breakthroughs). He then ran a brief post with his own introductory magical blend of writing: “Why are lesbians fat? Or, why are fat women lesbians? Is correlation causation? This profound scientific mystery demands an answer.” He quotes the article (“The federal government has spent $2.2 million studying why three quarters of lesbians are obese.”) and closes with his equally profound conclusion (his bold): “Wait a minute—both lesbians and heterosexual males have obesity issues, compared to either straight women or gay men? EXPOSURE TO VAGINA CAUSES OBESITY! The science is settled. That will be $2.2 million, please.”

The original article about the study states:

It is now well-established that women of minority sexual orientation are disproportionately affected by the obesity epidemic, with nearly three-quarters of adult lesbians overweight or obese, compared to half of heterosexual women. In stark contrast, among men, heterosexual males have nearly double the risk of obesity compared to gay males.

The issue here, of course (beyond what the fuck is minority sexual orientation?), is that a single slice of a study that took into account every gender, sexual orientation, race and beyond is being excerpted in a homophobic way not meant to examine a true health issue as much as to point fingers in an inflammatory way.

The “Other McCain” (lame blog name now that the more famous McCain is old news), is an example of what is wrong with the Internet. You get yourself a blog, call yourself something (in his case a “conservative commentator”) and just troll the Internet looking for things that, if you add 50 words and a picture of a topless woman on a motorcycle, you can get your right-wing nut job friends to click on. Especially if you add the word “vagina” in bold black shouty caps.

For the love of Ronald Reagan he even has a weight loss ad in the upper right corner featuring a mostly naked woman. Wow. And right below his brilliant article? Both a “Donate” button and an ad. Cha and Ching.

I’m curious about only one thing. He shouty-cap proclaims, “exposure to vagina causes obesity.” My money is on this guy being quite thin.