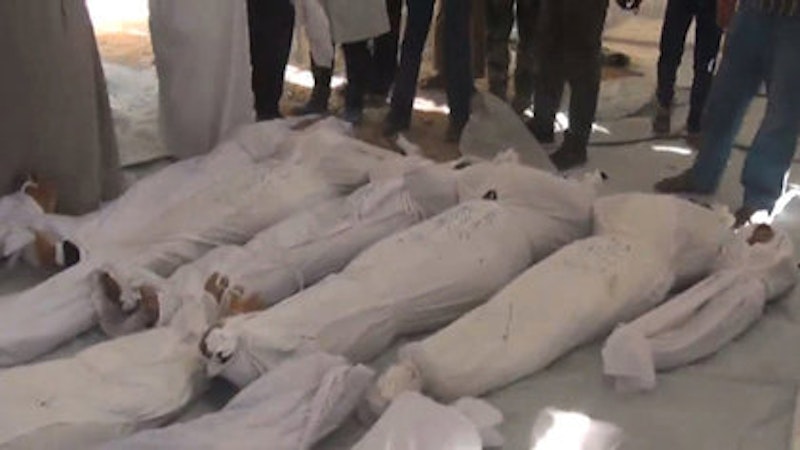 Were there any lessons worth learning from Iraq? Does the biggest foreign policy disaster of our generation have anything to teach us about foreign policy, or war, or about launching attacks on random Baath dictators in the Middle East? Or were tens of thousands dead and a still ongoing conflict just one of those unaccountable accidental things that you should try not to think about too hard?

Jonathan Chait plumps for the second interpretation. In a post on Aug. 27th titled "Syria Isn't Iraq. Everything Isn't Iraq," he argues that the main danger of Iraq is that we will take it too seriously. "The generation that came of age during World War II famously—and, in time, tragically—came to apply the formative lessons to every foreign-policy event that followed it," he says. World War II made us too eager to intervene; Iraq has made us too chary of using U.S. military power. Liberal pundits who don't want to bomb Syria are thinking emotionally, he contends. Instead, what we need is careful, dispassionate analysis of means and ends.

Chait's insistence that he is able to engage in such dispassionate analysis would be somewhat more convincing if he had not advocated war with Iraq at the time. One lesson you could possibly derive from the Iraq war, then, is that Chait does not know his ass from a WMD, and that any recommendation he makes about armed intervention should be met with derision and a swift kick in the shins.

But if everybody who advocated war in Iraq were barred from punditry, there would be no pundits left, and then the republic would crumble. Thus Chait keeps on keeping on, advocating war now as he advocated war then.

In the interim, he advocated war in Libya, which, he says, worked out great: we went in to prevent a humanitarian massacre in Benghazi, and we prevented it. Except for the small fact that human rights organizations have found little evidence that a massacre was in the offing, and even less that the NATO operation saved lives.

Seumas Milne at the Guardian: "What is now known, however, is that while the death toll in Libya when Nato intervened was perhaps around 1,000-2,000 (judging by UN estimates), eight months later it is probably more than ten times that figure. Estimates of the numbers of dead over the last eight months—as Nato leaders vetoed ceasefires and negotiations – range from 10,000 up to 50,000. The National Transitional Council puts the losses at 30,000 dead and 50,000 wounded."

However you look at that, it's clear there is serious dispute about whether the intervention was a humanitarian success. Chait's triumphant declaration that "the narrow, humanitarian goal that drove the U.S. to act was unambiguously accomplished," is bullshit.  Much like the presence of WMD in Iraq.

Chait's arguments for being gung-ho Syria aren't any more convincing. He writes: "The merits of intervening in Syria strike me as both a closer call and a lower-stakes matter than what we think of as “major wars.” The apparently forthcoming operation has much more modest ends than the intervention in Libya, which I supported and that succeeded in its aim. We will not be toppling a brutal regime or preventing an imminent massacre. The purpose of air strikes is to impose a cost on regimes that deploy chemical weapons against civilians. Attacking the Syrian regime won’t stop all future massacres of civilians, or even all chemical attacks on civilians, but it does strike, on balance, as better than doing nothing at all."

Let's put aside the question of whether the Assad regime was responsible for the chemical attacks (and the U.S. resistance to waiting for inspections has a depressingly familiar ring.) Let's put aside, too, the question of whether the administration or its water carriers should be trusted to tell us which wars are going to be "major." Instead, let's focus on the fact that Chait's rationale makes no sense. We’re going to make the Assad regime regret killing civilians by launching air strikes… and whom are those air strikes going to kill? Chait seems to think that somehow it's only the bad guys who will suffer, just like when we send out the drones, only terrorists get killed.

Except for the part where drones often kill civilians, and dropping missiles on Syria will kill civilians too, because, however advanced our technology, dropping bombs kill people. If we want to show that we oppose killing civilians, the best way to do that is, first of all, not to kill civilians. You do not show regard for human life by wagging your finger at unnecessary deaths while murdering innocent people yourself. Iraq showed us that, if common sense didn't. Chait has learned nothing from the first, perhaps because he never had the second—or misplaced it in the heady rush to war.