When Trump Kicks the Bucket

Won’t you be psyched? 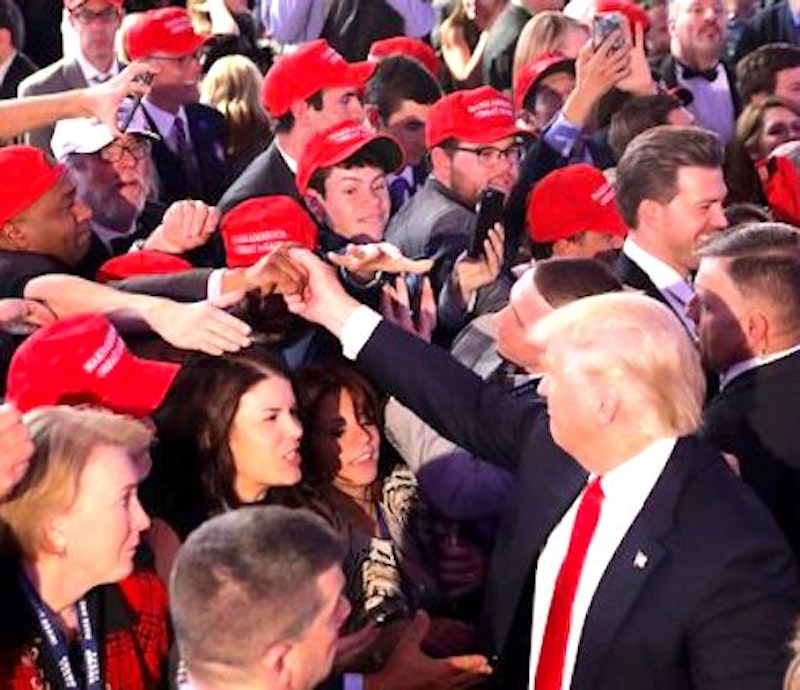 Would you be psyched if Donald Trump died in office? The answer is obvious, but keep reading. I was in Sonic Boom Records in Toronto the other day when the image of a dozen smartphones going off all at once with alerts and texts and push notifications screaming breaking news about our President’s sudden departure came to me. Idly browsing through dollar bin singles, I couldn’t help picturing another scene: four friends and me in an apartment receiving the same news. No details, no assailants, no assurance of the most likely scenario—a natural death, his black heart clogged by chicken grease and amphetamine abuse—just the breaking bulletin: Donald Trump Is Dead. How would you react?

Put aside pondering the implications for now—Mike Pence is an even scarier proposition: a bigoted ideologue who might actually be able to repeal the Affordable Care Act, overturn Roe v. Wade, and force NFL players to stand for the National Anthem under threat of his own unique punishment (dirty needles). The man may be milquetoast in some ways compared to Trump, but he probably knows how to get things done, and by all accounts his priorities would make life in America hell on earth for women, the LGBT community, and anyone who doesn’t go to church four times a week. We did the impossible math nearly a year ago after that awful election night when the calendar was wiped clean and the future looked completely blank and anything seemed possible in the worst way. There’s no easy way out.

But just imagine the elation, the cathartic joy of reading that headline while the man is still a sitting President: “Donald Trump Is Dead.” Wouldn’t you be thrilled? I’d jump up and down, buy a kazoo, and march down the street with the rest of my friends, ecstatic to finally see some karmic justice doled out in this relentlessly fucked-up universe. Still those difficult questions remain: by what method would he soar into that dark night? An assassination by North Korea would be alarming and, if included in initial reports, would dampen the mood significantly. Uranium poisoning by the Russians would be interesting, not as scary, and certainly fun to watch—can you imagine Trump’s already bloated and jaundiced face even more ballooned and bulbous with pustules and craters like poor Alexander Litvinenko?

It’s stunning that Trump continues to go to the heartland for vanity rallies in arenas, bull-rings, and airplane hangars—the necessary boost to his ego is obvious, and I know he hasn’t, but has no one around him seen The Manchurian Candidate? It only takes one—imagine the chaos and insane mess we’d face if a black person or an undocumented immigrant did the deed. America would burn like it hasn’t since 1968. What if they left a UNABOMBER-style manifesto behind? Even a photocopy of Ted Kaczynski’s “Industrial Society and Its Future” would do. Besides the random murders and bombings, Kaczynski’s anti-capitalist polemic was ahead of its time. He’d make a good guest on Chapo Trap House. You can see the rose emoji next to his name on Twitter.

I was talking to someone in Toronto about my daydream. They agreed it would be exciting, but argued that almost everyone would trot out the pre-Gingrich line, “While I vehemently opposed this President, I take no pleasure in his sudden death.” Sorry, I’ve misplaced all of my miniature violins and violas for Barron, Ivanka, Tiffany, Eric, and Don Jr. (Melania would be thrilled). This person noted that in 1981, their very liberal friends were stunned and disoriented by John Hinckley’s assassination attempt on Ronald Reagan. Obviously these people couldn’t stand Reagan, but we’re in a whole other universe of antipathy, bitterness, and pure unadulterated hatred when it comes to Trump. His presidency is unprecedented in too many ways to count. Respect for the office of President, no matter who occupies it, has severely eroded since Reagan was shot 36 years ago. It extends beyond disagreement: Trump has spent the last year trying to make life as miserable and stressful as possible for hundreds of millions of Americans. Why wouldn’t they blow off some steam, start an impromptu parade in the streets, and sing, “Ding Dong, the Witch is Dead” until the sun comes up?

In the October issue of Harper’s, Tom Bissell called the comedy of Trump “cruel and joyless and denuded of laughter.” There’s nothing funny left to say, and he’s beyond satire. Bissell was writing about Trump’s history with Saturday Night Live, and how his 2015 appearance as host was grim and regretted by most everyone still on staff. How do you parody a president who complains that the media covers brain damage in football too much—“They’re ruining the game!”—and then inadvertently sparks a mass protest of major league athletes kneeling during the National Anthem at games in protest? And that’s just one spoke of the wheel. I know people will cheer if Trump dies in office, I can see it all now, I feel it in my bones. But don’t get any ideas, it won’t be me. (This message will self-destruct in three, two…)