Why the “Take a Knee” campaign is destined to fail. 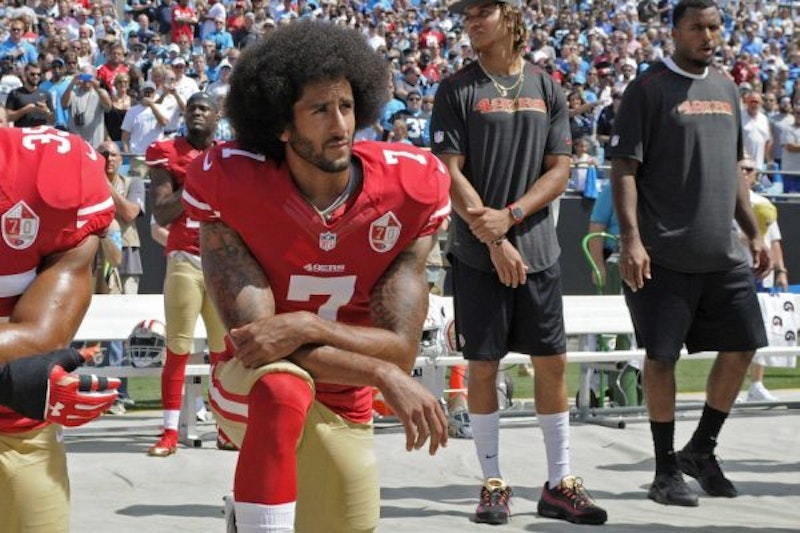 President Trump, on protesting NFL players, sounds like the guy who’s been on the barstool too long when he says he'd like to see team owners bark, “Get that son of a bitch off the field right now, out, he's fired.” If you still think policy is more important than culture in politics, then you haven’t paid much attention. It's all anyone wanted to talk about, which Trump understands. He'd surely prefer that this controversy continue to burn, rather than the focus returning to Russia or his lack of legislative accomplishments.

Taking a stand against the protesters was probably a smart political move for Trump, although a bad one for a nation that can’t find common ground. This president, who cares only about himself and his base that gives him his power, has given voice to what many of his supporters have been thinking since former San Francisco 49ers quarterback Colin Kaepernick first sat down during the national anthem in last year's preseason. On the other hand, the NFL has plenty to lose by reacting against Trump's words, especially since its TV ratings are continuing the slide that began last season.

Choosing to simply react against Trump’s provocations isn’t smart. That's exactly what Trump wants. Pittsburgh Steelers coach Mike Tomlin did this and got burned. He didn't think things through when he kept his players off the field until after the anthem on Sunday. Steelers offensive tackle Alejandro Villanueva, a decorated soldier who fought in Afghanistan, chose to break rank and stand on the field during the anthem, but he ended up apologizing to his team afterwards for showing them up. Steelers quarterback Ben Roethlisberger has since expressed regret that he didn't take the field for the anthem, complicating the situation even further. It's telling in a way that doesn't bode well for the NFL that Villanueva’s jersey soon became the number one seller.

Many Steelers fans watching the game were irate when their team failed to come out of the tunnel for the anthem they revere. A number of them may have had no major problem with black players taking a knee, but that didn't mean they were okay with this gesture, which Tomlin had failed to explain. Some even burned Steelers jerseys, which shows the level of emotion the flag evokes. A combat veteran having to apologize for showing respect for the flag further stoked them.

Mike Tomlin was confused on Sunday, but he's got plenty of company. It all started with Kaepernick, who chose the most divisive and easily misunderstood form of protest to call attention to police brutality to blacks the year before he was to become a free agent. On a practical level, that's bad business, especially when your recent performance has been marginal. If you want to say he was being selfless in the service of his cause, then you have to examine Kaepernick's strategy, which was risky given the flag’s emotional significance. A J.D. Power poll revealed that the top reason people stopped watching the NFL last season was the anthem protests. The 49ers quarterback said he was opposing police misconduct, but the national anthem isn't played at football games to honor the police. The quarterback's now unemployed, plus he's weakened the league that pays the salaries of so many of his black brothers.

There's also confusion about NFL players exercising their First Amendment rights by taking a knee. While this would be true if they were doing it in the town square, it doesn’t apply to the workplace, where employers are legally allowed to suppress free expression even when employees are not at work. Many of the same people who've seen teams penalized for a player doing a forbidden dance in the end zone seem to think Kaepernick has special constitutional rights when it comes to protesting social injustice when he's at work. Imagine a bank teller deciding to wear a MAGA hat at work to express their pro-life views and people saying this expression was protected by the First Amendment. Not even Republicans would try to make this case.

Trump is wrong in saying players who take a knee should be fired. That the president has called for a boycott of the league is a violation of everything his party has long claimed to stand for, but it's no longer clear that the GOP stands for much more than retaining power. Had Obama made a similar comment, Republicans would have been apoplectic, but once again they've retreated into their hypocritical silence.

Reacting in anger to Trump’s tweets is a losing game. A recent poll shows that most people are opposed to kneeling during the national anthem, just as Trump is. Due to their political myopia, what Colin Kaepernick and the people on the left see when a player kneels for the national anthem is not what Americans in general see. The “Take a Knee” campaign will not win any votes in the flyover states for the Democrats. Buffalo Bills running back LeSean McCoy stretching on the sidelines during the national anthem on Sunday before the game against the Broncos will not help the NFL, nor will the national anthem singers taking a knee as they sang. The people doing what Trump doesn't want them to do to send a message to him are politically naive. The most amazing thing about this whole brouhaha is its endless capacity to make people look dumb. Nobody's talking about police misconduct now. Everyone's talking about taking a knee. That's just what Trump wants.