If speech can constitute violence, North Korea and the United States have both been annihilated. 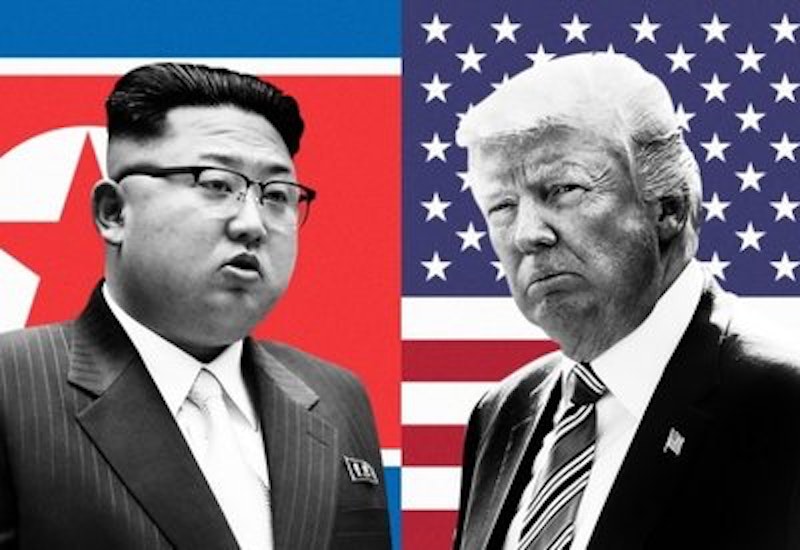 It probably started earlier, but I remember wide-scale calls for "civility in public discourse" beginning in the mid-1980s. I can't imagine a more boring position to defend, which accounts in part for the fact that the civility movement has been decisively defeated. Incivility, if pursued with commitment, creativity, and a heart full of truth, is more entertaining by far.

Until recently, I thought that American political discourse was too civil by a long shot. So civil were Al Gore and John Kerry as they ran for president, for example, that they made no definite assertions or even contemptible remarks for years on end. So civil were they that one could be forgiven for speculating that they did not exist at all, an impression reinforced by the fact that their civility consisted of mechanical production of phrases that they did not themselves compose.

Anyway, that's all over now. Jeb Bush, Marco Rubio, and Hillary Clinton were civil to the point of being indistinguishable from one another until Trump started lobbing verbal grenades into their staff meetings. They proved negligible opponents in Trump's relentless playing of the dozens, and went down in the epic rap battle, like Eminem's opponents in 8 Mile. They didn't have the talent, and they didn't have the preparation.

After blowing up Jeff Sessions and Mitch McConnell real good, Trump continues to seek foemen worthy of his steel. Perhaps he's found them in King James and Chairman Kim. I'd like to see his conflict with Lebron settled in a dark alley. But I'd like to see the conflict between the USA and North Korea decided in a solo combat of defamation, a verbal nuclear exchange entailing mutual assured instruction. It beats dying slowly of radiation poisoning, and imagine the ratings.

Personally, if I were looking for someone to engage in fisticuffs, I'd choose Kim Jong Un over Lebron James. If I was looking for a nuclear exchange, I'd choose Lebron, who, according to the IAEA, doesn't have a nuclear program. But Lebron, veteran of on-court smackdowns, is no match for Kim in the department of talking shit.

[Trump] made unprecedented rude nonsense no one has ever heard from any of his predecessors.

I’d like to advise Trump to exercise prudence in selecting words and be considerate of whom he speaks to when making a speech in front of the world.

The mentally deranged behaviour of the U.S. president openly expressing on the U.N. arena the unethical will to “totally destroy” a sovereign state, beyond the boundary of threats and regime change or overturn of social system, makes even those with normal thinking faculty think about discretion and composure.He is unfit to hold the prerogative of supreme command of a country, and he is surely a rogue and a gangster fond of playing with fire, rather than a politician.

Now that Trump has denied the existence of and insulted me and my country in front of the eyes of the world and made the most ferocious declaration of war in history that he would destroy the DPRK, we will consider with seriousness exercising a corresponding, highest level of hard-line countermeasure in history.

Action is the best option in treating the dotard who, hard of hearing, is uttering only what he wants to say.

Or as Dre and Snoop might frame the point: "We have your motherfucking record company surrounded; put down the candy and let the little boy go." You've got to like the variety, the vocabulary; even the eccentricity or incompetence of the English adds piquancy to the verbal destruction in which Kim revels. The reaction to Kim’s statement shows that many Americans, including editors at the Atlantic and the Washington Post, don't know the word 'dotard': a revealing commentary on their own verbal skills.

The formulations are sharpened by their truth, and once Kim Jong Un gets going he can't stop. But that may ultimately prove to be the chink in his defenses, the tragic flaw in a great man. The sheer verbosity of the roast is impressive, yet perhaps it yields the impression of an overall lack of focus. It is characteristic of Trump in verbal warfare to cut straight to the ego. Instead of a catalogue of insults aimed at your masculinity, your mama, your intelligence, your sanity, he just hits you with "little rocket man," leaving you to carry that with you for the rest of your days.

If speech can constitute violence, both North Korea and the United States have been annihilated. Nevertheless, hurling insults is nothing like hurling hydrogen bombs. You get posterized, perhaps, but not vaporized. So far, this situation is merely the entertaining spectacle of two MCs at the top of their craft.