White Supremacy Isn't What It Used To Be 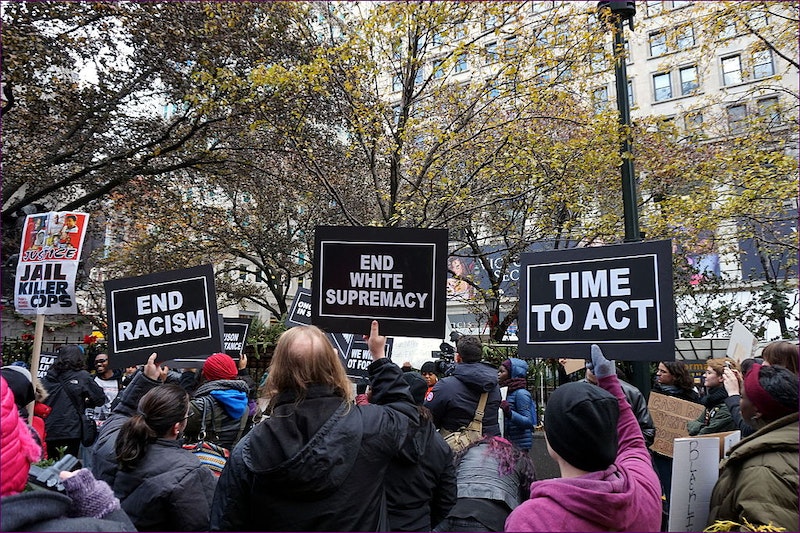 When Former FBI Director James Comey addressed the students of Washington D.C.’s Howard University last week, he was met with vocal resistance from a small contingent bent on silencing him. At one point, he had to stop speaking for 10 minutes. One of the protesters’ issues was Comey's endorsement of the Ferguson Effect, a controversial theory that posits that when videos of police misconduct go viral, police then become less apt to fight crime, so crime goes up. When a school official attempted to persuade the irate students to allow Comey to speak, they chanted, “White supremacy is not a debate!”

That Comey‘s been added to the growing list of “white supremacists” isn't all that surprising, given that the term has now become so broadly interpreted on the political left. Comedian Chelsea Handler called HUD Secretary Ben Carson, actor Stacey Dash, and former Milwaukee County Sheriff David Clarke—who are all black—white supremacists. The updated definition of a white supremacist is anyone who questions certain liberal orthodoxies associated with people of color. If you push back, you're presumed to want white people to call all the shots while non-whites just listen. Leftist zealots struggle to grasp nuance.

It wasn't that long ago that a white supremacist was a guy in a white robe and a peaked hood carrying a torch at an evening Klan rally, or someone marching down the street wearing a Nazi armband. The white supremacist was considered the most repulsive of the various gradations of the racist, and not to be confused with more casual racists—the type that might feel some discomfort in social situations if black people were present. Now the line’s been blurred and it's just one large, all-inclusive category. Even obvious anti-racists like Evergreen State professor Bret Weinstein, who merely declined to stay off campus on a day he was told white people weren't welcome, can get tagged as white supremacists and have their safety put in danger. Weinstein, a progressive, was warned to stay off campus because angry bands of students were allegedly searching for him.

College campuses are now strange. If you write something in favor of pivoting away from the divisive politics of identity and moving towards promoting economic issues shared by all people in a certain income range, you run the risk of being called in cahoots with the white supremacists. That’s what happened to Columbia University professor Mark Lilla after he did just that with a New York Times op-ed. His Columbia colleague, Katherine Franke (Director of the Center for Gender and Sexuality Law), responded by accusing him of thinking like David Duke. Franke doesn’t understand that Trump was elected, in part, because all of this liberal name-calling produced a backlash.

Who's to blame now that those with impeccable liberal credentials are tarred with this vicious slur? It's not easy to pinpoint, but a good guess would be influential author/racial polemicist Ta-Nehisi Coates. He claims that Trump was elected because of white supremacy, a simplistic answer to a complex situation, but nevertheless eagerly accepted by his many adoring fans on the left. Coates’ acolytes accept his unsupported conjecture that there's a widespread thing as “a commitment to whiteness,” and that this is what put Trump in the White House, instead of people being lukewarm towards Hillary Clinton or the Democratic Party’s abandonment of the working class in favor of coastal elites.

Coates’ lazy demagoguery makes many Democrats feel better, as it lets them off the hook for the horrific embarrassment of losing to a candidate as weak and unpopular as Trump, but such escapism comes at a cost. The identity politics that have made Democrats a minority party at every level of American government has many intractable defenders who react just like Katherine Franke did when their intersectional orthodoxy's questioned, so positive change has an uphill path for a party badly in need of a makeover.

The truth is that there are actually very few white supremacists in America. Richard Spencer, who’s perhaps the most prominent, presentable avatar of white supremacy in this country, has 74,000 Twitter followers, as compared to Ta-Nehisi Coates’ one million. Spencer’s people are pariahs who have almost no chance of holding elective office. The rally in Charlottesville was for white supremacists, but people were coming in from all over the country to attend the “ground zero” event and only a few hundred showed up.

Promiscuous charges of white supremacy has a downside, because politics never happens in a vacuum. At one time, just its mention evoked images of African Americans chained to trees as the mob surrounded them, but now mild-mannered Ben Carson might come to mind. The left needs to rein in all of the righteous name-calling that gives its political opponents fuel and it makes it look shrill and controlling.