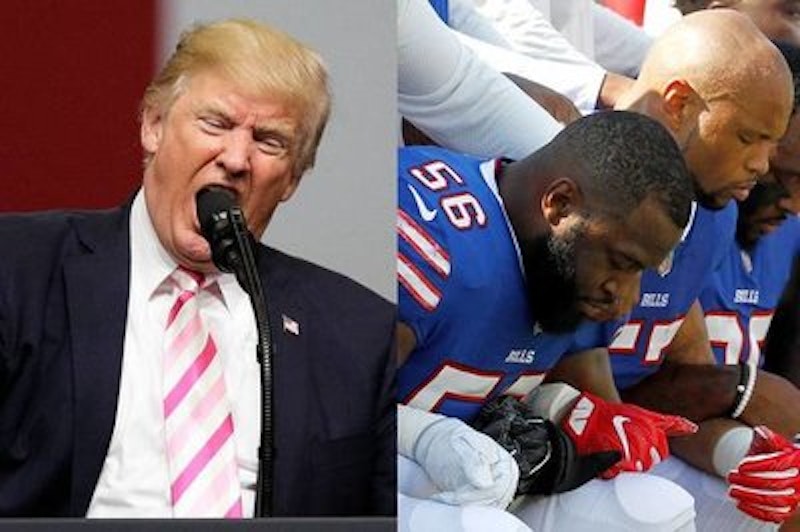 I feel less a part of this culture—this species—with each passing day. Sometimes now my mind boggles at the many layers of irrelevance I have to peel away just to explain why I don’t care about a given issue. Yet I remain convinced I’m not alone in this.

Take this kneeling-in-protest business, people refusing to stand for the National Anthem to draw attention to the U.S. falling short in its treatment of minorities. There are 20 reasons I don’t really care how this controversy is resolved. Perhaps you’ll agree with them:

Despite the very heated rhetoric surrounding race over the past couple of years, by most objective measures racism in the U.S. is mild compared to that in other countries, and it diminishes with each passing year, as gauged by people’s willingness to befriend, date, marry, work with, etc., people of other ethnic groups.

Focusing on the specific issue of police misbehavior could achieve something, but that relatively rational, technocratic issue keeps getting swamped, not alleviated, by transforming it into a part of a far larger, vaguer race conflict.

Absent time travel, we can never alter the horrible wrongs of the distant past. It shouldn’t be assumed, though, that this clearly means that inflicting costs such as extra taxes or regulations on the current generation is the solution. Note how rare it is for anyone, right or left, to try seriously toting up the precise compensation owed by each ethnic group to each other, given humanity’s long, complex history of wrongdoing. Where to begin? And where does it end?

No matter how good people’s intentions are, I don’t think they can look at humanity’s track record and seriously contend that ditching individual accountability in favor of tribal/ethnic score-keeping is likely to make things more peaceful and safe for anyone. Focusing more attention on our tribal allegiances divides, by definition. There is much to be said for “benign neglect” of the topic, no matter how lazy and unhip that may sound to some on both right and left these days.

Then again, who cares whether people ditch the National Anthem or other displays of subordination to the nation-state? Nationalism, like racism, is a form of collectivism, and if it’s truly individual liberty we treasure, I say ditch nationalism, too. I don’t say the Pledge of Allegiance, for instance, in part because a socialist wrote it. That’s not an endorsement of “globalism” on my part, either, if you mean global government—I just want a planet of individuals, freely trading and interacting.

Indeed, no matter how much cultural romance-gauze you wrap them in, things like the Anthem inevitably still redound to the benefit of the government, which thinks it’s in charge within these shores. End all forms of government, throughout the world, and there’ll be no anthems to get so sensitive about.

Even if we must remain saddled with a government for now, we needn’t have the outsize presidency that that government has grown (in defiance of the Founders’ wishes) over the past century. So any clash between parts of the culture in which the president backs down would also be a win.

If the presidency must exist, the president’s job, he should remember, is merely to administer the government, not to boss around the culture, so regardless of where one stands on the race issues noted above, Trump should still shut up about anything outside the purview of his job-which-shouldn’t-exist.

The whole kneeling protest is bad strategy, though, since even if it sweeps all corners of anti-Trump America, it still only results in Trump’s enemies literally kneeling before him. This aspect is lose-lose, resisters.

Trump still looks like a stooge, though. It’s impressive that even something as popular as football cannot withstand his onslaughts, I suppose, but it will sooner or later draw attention to the fact that he reportedly expressed some interest in being an NFL owner years ago but was regarded as creepy and untrustworthy by the organization.

That should in turn remind us that this guy who can’t be trusted with a football team is entrusted with the nuclear football, and if America dies bickering about football during a war with North Korea, the aptness of that end will still not console me as flesh melts from bone.

Meanwhile, the federal government, looking from sports stadium to East Asia for fights to fight, remains $20 trillion in debt, if anyone still cares.

But then, the collectivism that leads to cash-strapped big governments and Asian tyrannies might not happen in the first place if we avoided activities like sports that inculcate a groupthink, zero-sum-combat mentality. End sports altogether (voluntarily, of course) and our whole culture may become smarter and more individualistic overnight. Cheer for mutually-beneficial cooperation instead of winner-take-all smackdowns.

We could at the very least cut government subsidies to sports, such as money for stadiums. There’s nothing free-market or DIY-American about billionaire athlete mooches.

Yet the most likely result of the current wave of protests, as usual, is neither that police brutality will decrease nor that any stadium subsidies or quasi-monopoly legal privileges will be ended but merely that TV ratings for sports events will decline. No one will win on any front.

Amidst my highly materialistic concerns, I should keep in mind that player Kaepernick’s kneeling pose is partly a prayerful one, which I gather we’re supposed to regard with some respect—even though I seem to remember an awful lot of people expressing annoyance at that Tebow guy.

The guy we should perhaps be annoyed at, though, is God, who as far as anyone can discern does not exist yet keeps cropping up in our culture.

Perhaps the most troubling aspect of this whole controversy, though, is that it has begun to inspire imitation kneeling in other cultural quarters that actually matter, such as among Star Trek and X-Files actors. Now I’m almost stirred to worry. But not quite.

Come to think of it, does anyone know which precise wrongs Kaepernick is protesting and which precise remedies he wants anyway? It’s become all about the kneeling. I’m reminded of a protest a year or two ago in which people were very briefly encouraged to wear safety pins, then soon discouraged from wearing safety pins when it was concluded they’re oppressive for some reason after all. All this time later, I only remember the safety pins. Maybe it was something to do with punks being marginalized. Maybe it was all a hoax.

At least if all this ends with a bloodbath among competing cultural factions, big noisy arenas are the right place for it. The Romans kept getting sicker and sicker, and like the reality-show contestants and tell-all bio-writers of our own day, they knew instinctively that if you’re having a meltdown or indulging in sadistic attacks, gigantic public spectacle is the natural way to go. I hope you’re enjoying the show.