Doesn't have a racist bone in his body! 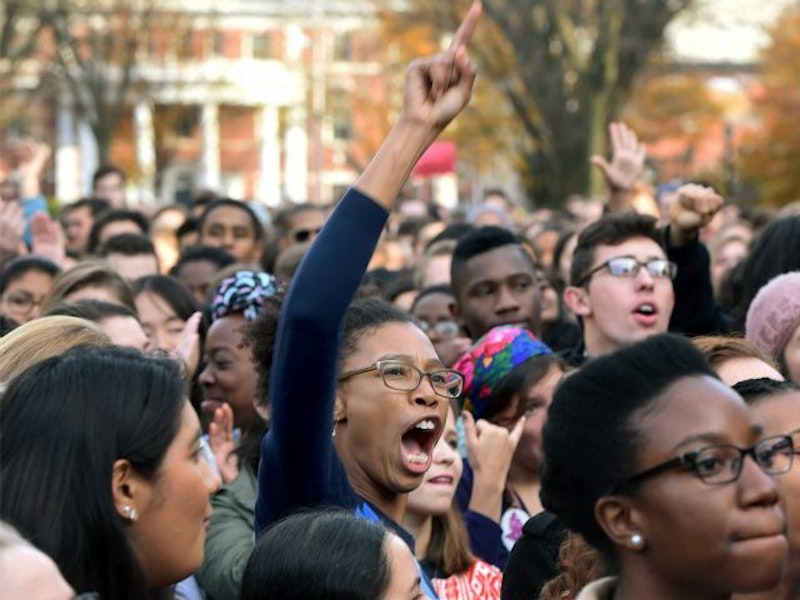 "He doesn't have a racist bone in his body." If someone is accused of racism, odds are that some defender will assure the world that the person’s bones are racism-free. David French trotted out the cliché last week in an essay at National Review bemoaning the fate of white people at universities today. "At colleges, immersion in identity politics begins on Day One, when countless students start their orientation-mandated 'privilege walks' designed to teach white kids who don’t have a racist bone in their body that there is something inherently wrong with them." No white kids have any racist bones, yet college's attempt to educate them about racism. The inhumanity!

French's article inadvertently illustrates why the "no racist bones" meme is so popular. The thesis of his essay is that white Christians in the United States are oppressed by teeming hordes of the marginalized and leftists. "Progressives cannot make false accusations of hate and expect support," he declares. For the essay to work, then, the accusations have to be absolutely and categorically false… down to the last bone.

But how can you determine if a bone is racist? You can't see bones, or, for that matter, evaluate their morality. Bones don't think; they don't climb out of your body and protest against integration. To say that racism is about bones is to take racism out of the realm of ideology, and turn it into something internal and unchangeable. You are born with your bones, racist or otherwise.

In fact, the racist bones cliché effectively turns racism into a racial designation. Racism becomes an innate quality—which means, as French says, that accusing people of racism means you're saying there's "something inherently wrong with them." When French insists that white people don’t have any racist bones, he’s saying that they’re pure of body and heart, untouched by sin. But he’s also saying that racism is a characteristic of bodies, like height, eye color or, for that matter, skin color. If racism is about bones and bodies, then to call someone a racist is a racist slur. It's faulting someone for qualities that they can't control; it's attacking them for the nature of their bones.

Back in the real world, though, racism is about thoughts and actions. Donald Trump's bones are as innocent as anyone else's; when he calls Mexicans "rapists" or refuses to condemn Nazis, though, his thoughts and words are racist. The policeman who shot Philando Castile wasn't innately evil; a racist society and institutions taught him.

French tosses in a few "to be sures," acknowledging that racism does exist in American life; it's only "false accusations" of racism that upset him. But he doesn't discuss any instances of what he’d consider actual racism, or waste any outrage on condemning it. Instead, his metaphors betray his real commitments. He's certain that all those white kids he hasn't met have no racist bones. But more than that, he turns racism into an argument about bodies and identities. Accusing someone of racism is like saying that they’re a monster. Racism isn't "You have wrong ideas about black people," or "You’re doing these harmful things, and you should stop if you don't want to hurt people." Instead, a racist is someone who has something wrong with them, bone-deep. How can you say these nice college students are corrupted to the bone?

Most people in a racist society have some racist ideas, participate in racist systems, and perform some racist actions. When accused of racism, French asserts that he, and white people in general, are bodily, racially pure—turning to white bones to prove his case. Even for people like David French, without a single racist bone, it's hard to keep from using racist words, or thinking racist thoughts.