A Tough Assignment for Maryland Democrats

The only advantage may be that off-year elections historically favor the out party. 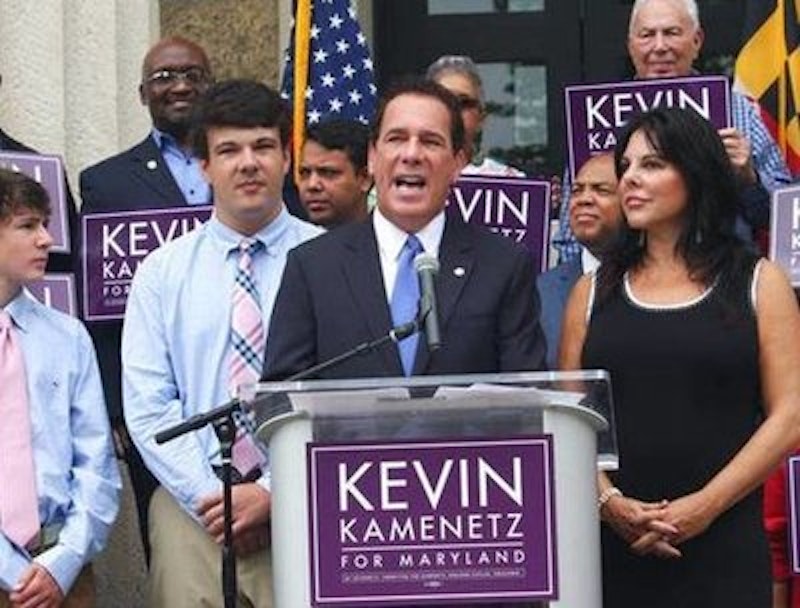 Maryland Democrats, their ranks of candidates for governor swelling almost daily, are already discussing voter turnout next June to pick the nominee with the strongest chance of beating Republican Gov. Larry Hogan next November.Turnout out and momentum, the tailwinds that advance any successful campaign, help provide the forward thrust between the two elections, the lazy beach-time space when few people pay attention to politics and campaigns.

But Democrats, despite their superior numbers and surfeit of candidates, have a tough assignment. With a popular Republican in the State House, a manic Republican in the White House who’s momentarily cozy with Democrats, static numbers on the voter registration books, a Democrat abandoning a Congressional seat, and a do-nothing GOP-controlled Congress willing to take away entitlements, their only advantage may be that off-year elections historically favor the out party.

Democrats still outnumber Republicans 2-1. But their numbers are at a standstill 2.13 million while Republicans have creeped to 1.011 million and independents (or unaffiliated voters) continue to grow, now at 691,979. Maryland’s Democratic party is basically clustered in five jurisdictions along I-95 – Baltimore City (303,719 registered Democrats); Prince George’s County (451,903 registered Democrats, the state’s highest); Montgomery County (377,164 Democrats, but also 116,477 Republicans); Howard County (105,317 Democrats); and Baltimore County (306,815 Democrats, but 143,313 Republicans, the highest concentration in the state.)

Two counties warrant granular attention. Montgomery bears the burden of always being tagged a liberal county. It’s not. Montgomery is a good-government county, with half as many Republicans as Democrats. Montgomery, for example, voted for Dwight Eisenhower, Richard Nixon and Ronald Reagan for president. Until just a few years ago, Montgomery elected a steady parade of Republican members of Congress (Charles McC. Mathias Jr., Gilbert Gude, Newton Steers, Constance Morella.) And It has elected Republican county executives as well as County Council members.

Baltimore County, with the state’s largest Republican cohort, came recently to the GOP fold, in name as well as numbers. From Towson east to Dundalk had always been solid Democratic territory, a numerical phenomenon supported, in part, by the county patronage system and payroll dating back to the days of political boss “Iron Mike” Birmingham. That geographic patch now votes Republican. From Towson to the west was populated by professionals in developing areas such as Lutherville and Owings Mills. And at one point, Baltimore County had the largest black population of any non-black county in America. Today, Baltimore County may be Democrat in name, but it more likely votes Republican (as it did for Hogan in 2014.) In land mass, the county is the 22nd largest in the country.

So, do the math: Primary turnouts average, on the high end, at about 35 percent. There are already seven announced Democrats running for governor, and a few more threatening, if for no other reason than to get it out of their systems. Only – and this is not intended as an insult or endorsement – two or three have standing or recognition with political bona fides, which are certainly not sole conditions or qualifications for election – Baltimore County Executive Kevin Kamenetz, Prince George’s County Executive Rushern Baker and State Sen. Richard S. Madaleno, of Montgomery County. Each one is from a populous county, and in a race with at least seven candidates, winning a low-turnout primary won’t require much of a percentage of the vote.

An object lesson on how primary turnout undercuts candidates occurred in 2014 and provided a forewarning for the general election. Former Lt. Gov. Anthony Brown, the heavily favored candidate in a multi-candidate Democratic primary, energized only a 16 percent voter turnout in his home county of Prince George’s but won the primary. Ditto in neighboring Montgomery, where only 20 percent of the voters showed up on election day even with two of their own – Douglas Gansler and Heather Mizeur – on the Ballot. Those returns should have been an early signal to anyone who was paying attention and was later not shocked by Brown’s defeat in the general.

Democrats have another, far more serious problem, and that is the breach between the traditional wing of the party and the diehard progressives left over from the 2016 Sanders campaign who are campaigning on last year’s issues. There’s no question that the party is drifting leftward, but the abrupt swing could take down the Maryland’s party’s chances with it.

The list of Democratic candidates is impressive for its accomplishments and credentials, though some of their reasons for running are thin: The latest to announce was Krishanti Vignarajah, a former policy director for Former First Lady Michelle Obama and a Sri Lankan by birth. Education and gender are front and center as her reasons for entry.

The term-limited Kamenetz is practically a career public official. He served two terms as Baltimore County Executive and four as a County Councilmember. He in a running feud with Hogan over a number of issues. Similarly, Baker is term-limited, spending two terms cleaning up the mess he inherited from his predecessor, the incarcerated Jack Johnson, and before that as a state legislator. Madaleno, openly gay, is an articulate spokesman for Democratic policy issues as head of the Senate Budget Committee in Annapolis where he was also a budget analyst before shifting to the elective side of government.

Ben Jealous is the former NAACP head who, last year, traversed the nation as a surrogate for the presidential campaign of Sen. Bernie Sanders, of Vermont, and has Sanders’ endorsement. Jealous brings many of Sanders’ issues to the Maryland race for governor, especially the single-payer health care system and a $15 minimum wage. Alex Ross is a Baltimore entrepreneur, and Baltimore attorney James Shea is a former chair of the Maryland Board of Regents and an ally of Former Gov. Martin O’Malley (D). Also considering the race is Maya Rockeymoore, a policy consultant and wife of Rep. Elijah Cummings (D-3d).

Before a chosen Democrat gets to the Nov. 6, 2018, general election, they all must slog through the June 26 early-summer primary with one thought in mind: It’s organization – identifying your vote and getting it out on election day – that wins primary elections and not how much money you’re going to spend on Pre-K. That’s reserved for general elections where issues and personalities help to amplify the differences between candidates and parties.

For the moment, though, the battle is among Democrats who will no doubt debate (1) which is the most likely to be the strongest to represent the party against Hogan; and (2) forget about trying to make a major issue of attaching Hogan to President Trump. It hasn’t worked, and it probably won’t. Trump’s too shifty and unpredictable to pin down, and Hogan’s smart enough to zig and zag as necessary. Democrats should concentrate their message on Hogan the governor.

And what’s even more difficult for Democrats to define is that Hogan, while frequently at a protocol standoff with Democrats in the General Assembly, hasn’t given anyone reason to be really angry at him. And there’s the matter of money. With the broad field of Democrats, contribution dollars will be spread thin and in short supply. Hogan already has $5 million in the bank in a state where recent campaigns for governor have reached $20 million.

There’s one final piece of advice from the late columnist Molly Ivins: “I long since decided that if the candidate doesn’t have some Elvis to him, he ain’t gonna make it.”