Ted Cruz reports the earth is not flat. 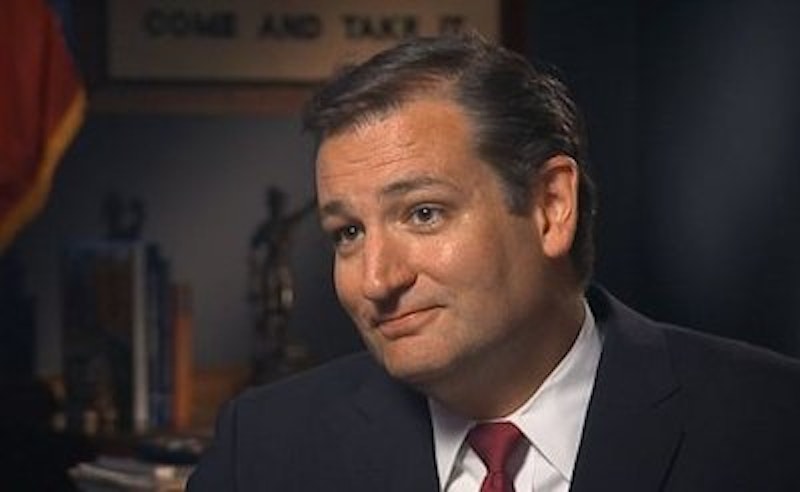 It boggles the mind that in 2015 a presidential candidate could emerge bellowing a complete disregard for science, but that’s our world.

In an interview with the Texas Tribune, Sen. Ted Cruz appeared to be running against President Obama, arguing he isn’t a “back bencher” in the Senate like Obama was. Apparently the Harvard Law grad hasn’t gotten the memo that the President isn’t running against him. In the interview, he also criticizes Hillary Clinton’s email (yawn) and waves the Constitution around to avoid discussing his opposition to marijuana and gay marriage. We’ll have to be patient for future idiotic statements on those two topics. Maybe he’ll even demand Obama’s birth certificate for good measure.

But the best part of the ill-advised candidacy so far is Cruz’s vastly unintelligent statements on climate change. Science be damned when conservative candidates financed by fossil fuel companies are asked about the environment. Cruz stated, “Global warming alarmists are the equivalent of the flat-earthers,” adding “It used to be [that] it is accepted scientific wisdom the Earth is flat, and this heretic named Galileo was branded a denier.”

In his Forbes article, Steven Salzberg addresses the global warming denial directly, pointing out that Cruz is wrong on two counts: Galileo neither argued against flat-earthers nor was ever called a denier.

“Cruz’s statement is not just wrong: it’s also arrogant. Cruz is comparing himself to Galileo, one of the greatest scientists in history, as if he (Cruz) were making a brave scientific stand against a dogmatic opponent. This is the crux of the Galileo gambit: the speaker claims to take a heroic stand against a powerful foe while defending the truth. Sorry, Senator Cruz: you’re no Galileo. Not even a little bit.”

It’s cringe-worthy that Cruz invoked his two mathematician scientist parents in the same speech in which he denounces modern science. Does the Ivy League graduate really believe all the scientific data in recent history is incorrect, or is he just choosing to ignore it? The sea level is rising. You can’t ignore the measurements of this, it’s just reality. Ask the people who used to live on islands that are now underwater. Maybe Cruz’s scientist parents could explain to him that the cause of sea level rise is the warming of the ocean and the melting of the ice caps.

Cruz is waging a full-on war against science and those who believe in it, incorrectly and ironically referring to liberals as “anti-science zealots” who don’t believe in God’s creation of the earth.

Cruz declared that there has been “satellite data demonstrate for the last 17 years, there’s been zero warming.“ The Washington Post debunked his claim, created using a very limited data time period, stating, “Cruz’s claims that there has been “zero warming” or “no recorded warming” since 1998 is not correct… the range of data that are used to record global temperatures do not support that claim and show there have been slight increases in global temperatures since then.”

Science offers all the data in the universe to make Cruz’s outlandish claim seem even less intelligent. NASA and NOAA, which recently declared 2014 as the warmest year on record, explained: “The 10 warmest years in the instrumental record, with the exception of 1998, have now occurred since 2000. This trend continues a long-term warming of the planet, according to an analysis of surface temperature measurements by scientists at NASA’s Goddard Institute of Space Studies.”

Liberals and other intelligent humans of any political disposition who believe in science and data and reality should start popping some corn for the upcoming presidential campaign. Watching Cruz try to pretend that climate change isn’t real is going to be an entertaining ride through a warm galaxy.