I Weep Upon the Corpse of Meritocracy 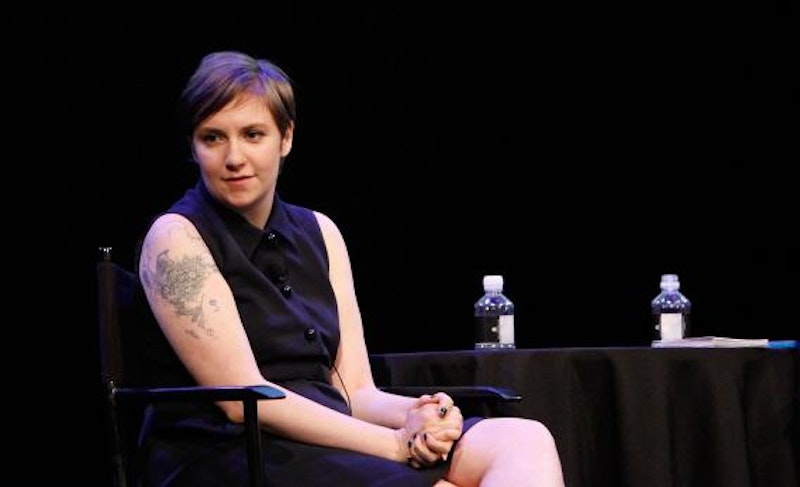 Writing is supposed to be a meritocracy. Ever since the days when men were bards and women were nobody, the greatest writers have scribbled their way out of obscurity and into a Norton's Anthology of Validation. Hemingway's sparse prose bloodied the cravats of innumerable less virile proselings, while "Orwellian" perpetuated totalitarian tanning upon the insufficiently rigorous backsides of objectively inferior adjectives. In writing, if you're good, you're good, and like Moby Dick you shall rise above your troubles and breach upon waves of tenured acclaim.

Or is it all just hooey? An adoration of my chosen profession was sorely tested this week by some of the most illustrious taste-makers in the literary business. The New Yorker hired television actor and writer Lena Dunham to write a piece titled "Dog or Jewish Boyfriend?" in which she asked readers to figure out if various invidious statements described her dog or her Jewish boyfriend. Meanwhile, over at The Morning News, indie rock star Stephin Merritt was called upon to review Anthony Doerr's All the Light We Cannot See and Roxane Gay's An Untamed State.

Both Dunham and Merritt have been pilloried at length for their essays: the truth is that neither piece is quite as awful as has been claimed. Dunham's essay has the smugly cutesy wit of a New Yorker cartoon; Merritt's review is a dyspeptic bit of empty-headed animosity. Both, in short, are fluffy, meant to provoke a frisson of empty giggles and empty animosity before the distracted reader clicks on to the next distraction/provocation.

What rankles me is the stunt casting. The New Yorker and The Morning News, each in their way, stand for excellence: they are snooty bastions of cultural attainment. Both are, broadly speaking, too snooty and excellent for me; I’ve never been able to place a piece at The New Yorker, and, though I’ve gotten one published in The Morning News, I've certainly never been invited to participate in the Tournament of Books for which Merritt filed his organized burst of words.

Normally, I’d assume that my failure to get these gigs is in line with the great tradition of letters aptly summed up by Alexander Pope: "The mediocre who lack wit/Won't get the best gigs on the internet."

Or as James Joyce would say: fuck your stupid stunt casting. Dunham is not an essay writer. Merritt is not an essay writer. They weren’t chosen for these high-profile gigs because of an ability to write thoughtful essays dripping with crystalline adverbs. They were chosen because they are celebrities. There was no rigorous quality evaluation of Dunham's prose at The New Yorker. There was instead a crass calculus weighing the relative extent of The New Yorker's circulation against the relative size of the viewing audience for Girls.

Merritt, some insist, reads voraciously, but this isn’t why he was asked to write about books. He was asked because The Magnetic Fields is a band people have heard of, while nobody, anywhere, has ever heard of any book ever at all.

There is only one conclusion: the literary world is not a tower of merit. It’s instead a sad little puddle of venal fame grubbing. At one time, I thought the path to literary success and a New Yorker byline was via the honing of craft and the assiduous cultivation of my own individual essential voice. I eschewed the lures of fame, refusing to start a hit television show or join an indie rock band.

And what have I gained? Only a troubled mind. Callowness rules the roost, and launches scornful cock-a-doodle-doos at the aesthetic pretensions of the less-well-branded. Or, even worse, perhaps my aesthetic pretensions are not even aesthetic pretensions. Maybe the pursuit of literary excellence was just another way of chasing fame after all. Shakespeare and Hemingway are acceptable names to drop, but really, if they could, they'd both write for the Times Literary Supplement just like Kim Kardashian.