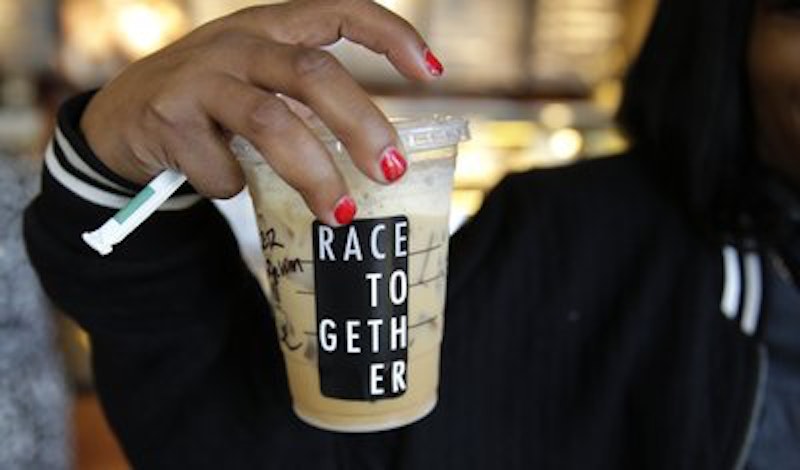 Voices of Race Together. “Hey, she wants to talk about race,” says a barista in Seattle. In New York, a customer speaks: “I don't know. I just saw there was that promotion going on.” Back in Seattle. “Anything you’d like to say about race?” asks a customer. The Seattle barista answers, “I dunno. Whaddya think?” In New York, the customer there: “Yeah. Like, what happens if someone wants to talk about it?” The New York barista: “I don't know. Nothing.” A second New York barista, annoyed by a radio reporter, drops a classic: “I’m actually working right now, okay. So I’m sorry about that, no comment.”

This is what we hear from those franchises located near media types having a good scoff at Race Together. The media types are right. Go visit a Starbucks counter: nobody is writing that stuff on cups, nobody is putting on Race Together stickers. Duh. The launch-a-conversation grand drive would have to raise its game just to be a shambles. Really, it's a non-occurrence. “I think it's starting next week,” says a manager in Brooklyn.

No, it just ended, seven days after being announced. The company says the end is right on schedule, but nobody had mentioned the seven-day cutoff when launching the initiative. The embarrassing fact is that Twitter has been laughing at the company for a week, and a lot of the media has laughed too.

“I know this hasn't been easy for any of you,” says Howard Schultz, the boss of Starbucks. He's addressing his employees, whom he calls partners because he thinks that changes things. He and Starbucks blur together in his thinking. When narrating events, Schultz tends to fall into “we.” A week ago, when launching Race Together, he talked about the post-Ferguson climate and how “we felt a responsibility to act” and how “we called our partners together.”

Now Schultz believes the partners are suffering along with him, flinching at the next tweet. Little does he know. Bloomberg View describes Starbucks as a “remarkably focused, cohesive global corporation.” Schultz made it what it is, a giant success. But now look. To get fancy, Race Together and Howard Schultz are like Tolstoy's Battle of Borodino: a messy crowd scene with a fellow wandering around who thinks he's in charge.

“Leading change isn’t an easy thing to accomplish,” says a spokeswoman, the same one who insists that Starbucks always meant to wrap up the campaign right now. This Baghdad Bob effect is typical of corporations when they talk to the rest of us. Schultz, addressing his partners, hurtles into a different sort of speak. “We leaned in because we believed that starting this dialogue is what matters most,” Schultz says in his message to his partners. “We are learning a lot. And will always aim high in our efforts to make a difference on the issues that matter most.” This is the language a corporation uses when it talks to itself, when the higher-ups outline the correct metaphysical stance all hands must take in the course of moneymaking.

Notice that he leaves out what is being learned. My guess is that “We are learning a lot” is like “We are taking vitamins,” a good-things statement that needs no filling in. When times are hard, perhaps this particular statement does duty as an indicator that the chin is up. But I'd love to know what lesson Howard Schultz draws from the great Race Together week of flap. So far I've learned two. One is that conversations about race are already being conducted on Twitter, not led by any corporation; service sector workers don't have to get the ball rolling. Another is not to say “we” when you mean “I.”