Meanwhile, Martin O’Malley’s on the move in early primary states. 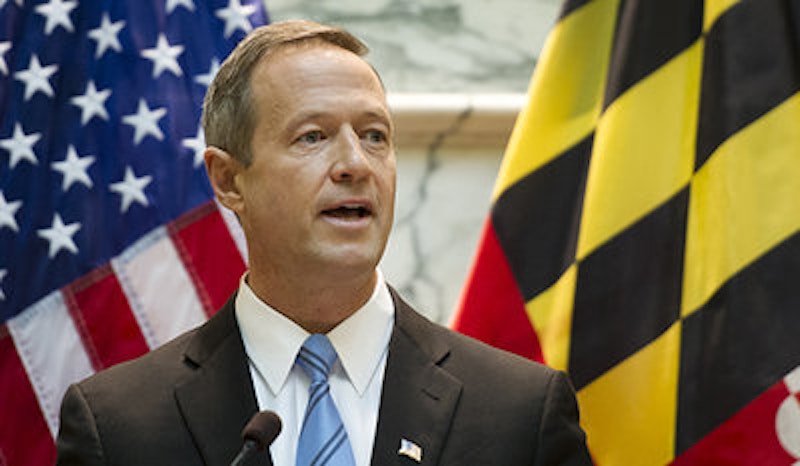 You flunked if you failed to check all five. Even the most astute join O’Malley in not knowing precisely what’s on his febrile brain or where his tentative campaign for president is heading. But one thing’s for certain that nobody can deny. Like him or not, O’Malley is a man of exceptional political skills.

O’Malley’s busy traipsing through the early primary states, New Hampshire, South Carolina and Iowa, very much the same way he ran his “kitchen table” campaign for governor—meeting voters, retail style, one-by-one, two-by-two and sometimes even a handful or more. The trick, at this point, is not in the numbers. The skill is that he’s the only Democrat doing it. And by all reportage, the folks in the Palookavilles love the attention. He has promised a decision by May.

For, in fact, O’Malley’s the only Democrat really running at this stage while Hillary Clinton, the proclaimed long-odds favorite, sulks on the sidelines, building the most impregnable defense since the Maginot Line, collecting obscene amounts of money and deflecting attacks over her private email account as secretary of state, the Clinton family foundation and, worst of all, counteracting the impression that her prospective candidacy for president is just another Clinton con job. As it’s developing, Clinton’s campaign appears to be little more than a lengthy vagina monologue about the prospect of the first woman president.

The beginning of a campaign is a solitary affair—a candidate, a driver, an aide or two and a string of one-night budget motels and hotels. To a former governor, this may seem a come-down from a fully-staffed 54-room mansion, a platoon of security guard-drivers and a personal staff of about 115. For O’Malley, this is the certitude of a techno-brat who’s experienced an epiphany as an anti-Wall Street populist in the three months he’s been out of office.

His campaign is gradually building as recognition occurs and legitimacy accrues. O’Malley is now followed daily in his travels by The Washington Post, he’s trailed by a team of videographers to record his speeches and interviews for fresh commercial footage, a photo of O’Malley strumming his guitar in a muscle shirt topped the Drudge Report for a full day and pictures and stories of O’Malley in the national press abound. Democrats on the left (as well as reporters of all stripes) are itching for an alternative to Clinton and, if nothing else, hoping for a competitive fight. And if not Sen. Elizabeth Warren (D-MA), the diva of the left flank, who else, at least for the moment, but O’Malley?

There are others, of course; Vice President Joe Biden and Sen. Bernie Sanders to name two, but neither has made a move and time’s running short to assemble money and manpower. In truth, Democrats, unlike Republicans, lack depth on the bench right now and there is the distant dread within the party that Clinton’s expiration date has come and gone and fatigue has set in. She’s 68, O’Malley’s 52. Clinton’s yesterday’s goods.

And that’s where O’Malley’s political acumen shines through. If there was an early inkling that O’Malley would some day run for president, among the first one to see it, or mention it, was the late Walter S. Orlinsky, former president of the Baltimore City Council. “He’s got the mark,” Orlinsky said often. “Someday he’ll be president.” In fact, it was at Orlinsky’s funeral, in February, 2002, where O’Malley, as mayor of Baltimore, delivered the main eulogy, that Orlinsky’s words were repeated as O’Malley sat in a front pew.

The big tip-off that O’Malley might be serious about the presidency was his pass on running for the Senate seat being vacated by Barbara Mikulski. While by no means a certainty, O’Malley would have been considered the front-runner after having won two statewide elections by substantial margins and both times with up to 90 percent of the black vote. In fact, O’Malley only ever lost one election, and that was his first, for the state senate, by 87 votes.

O’Malley appears to finally have found his voice, or at least his speechwriters have. (He’s signed on with a Washington speechwriting shop.) He’s shredded his earlier techno-babble stump speeches about his statistical approach to governance. These days you’ll here such resolute populist phrases as “Wall Street’s reckless behavior” and “reckless gambling” “Sing with me, people,” and “When women make money, America prospers.” O’Malley sounds like a squad leader from the “Occupy Wall Street” movement only without the LL Bean tent.

His trumpet call is for restoration of the Glass-Steagall Act, a Depression-era law that separated commercial and investment banking and prevented banks from gambling with depositors’ dollars. It was repealed, it is important to note, by President Bill Clinton and assumes some of the blame for the recent near collapse of the economy.

O’Malley is making an impression with voters even if he isn’t nudging the polls. Voters in the early primary states who’d never heard of him are now listening and impressed by what they hear, according to reportage from the campaign trail. And for the moment, he’s every Warren supporter’s second choice. Even though Warren insists she’s not running—pause for a doubting chuckle—her most ardent supporters are convinced they can coax her into the race.

O’Malley has already invested in the primary states as governor and as chairman of the Democratic Governors’ Association as well as the DGA’s principal fundraiser. In Iowa, for example his PAC, O Say Can You See, spent $45,000 and dispatched paid workers to help Democratic candidates last year. And he has campaigned and been a featured speaker at numerous Democratic events in New Hampshire over recent years. At one stop in Iowa, he strolled to the stage of a restaurant, borrowed a guitar and began to serenade the audience.

O’Malley barely registers in the polls, anywhere from one percent to 11 percent, depending on the survey, while Clinton tracks consistently in the 60s. O’Malley left office on a down note, mainly because of a series of unpopular tax increase. He was, however, a very effective governor with a series of impressive legislative accomplishments—abolishment of the death penalty, passage of Maryland’s Dream Act, same sex marriage and one of the strictest gun control measures in the country—all programs that make liberal Democrats’ hearts tick like taxi meters on a rainy day.

There are those who argue that a pismire state such as Maryland, with only 10 electoral votes, is insignificant in a presidential race. But the map, and the electorate, is changing rapidly in demographics and coloration. And that’s where O’Malley’s political smarts shine through again. The electoral map, and the number of safe and leaning states, favors Democrats in 2016. A sure signal of O’Malley’s intentions will be if his brother, Peter, an organizational and computer whiz, takes leave from his law firm to manage O’Malley’s campaign as he has in the past.