Better the first than the second. 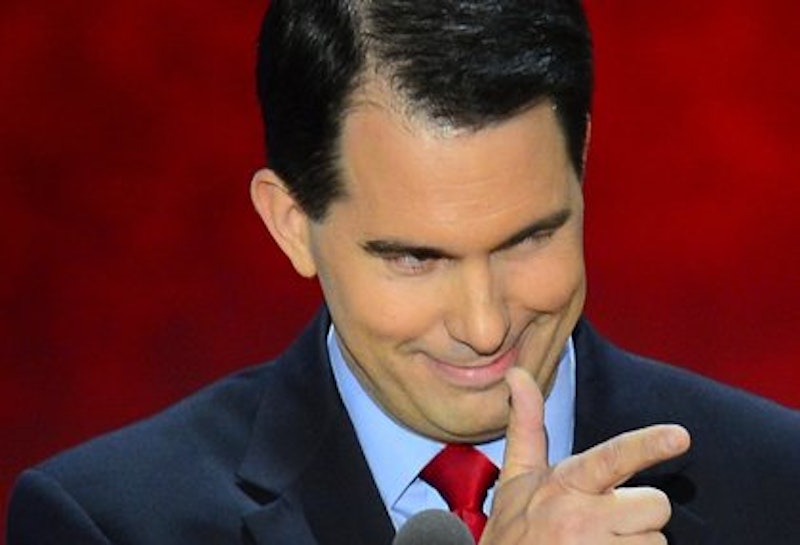 Everybody loves to sneer at hypocrisy. That's because hypocrisy is easy to pin down. If you say one thing and do another—well, there you are, dead to rights, saying one thing and doing another. Other moral judgments are a lot trickier. If you're the president, for example, and you call down a drone strike on a bunch of kids, is that immoral? You can say you didn't mean it; you can say you were hunting terrorists; you can say that sometimes you need to make tough choices to defend whatever it is you think you're defending by killing children. But if you said you'd call down a drone strike, and then you don't make a drone strike, it's cut and dried—you're a hypocrite. You promised and you didn't deliver.

Conor Friedersdorf has a fun post at the Atlantic this week in which he makes a strong case that Scott Walker's foreign policy is filled with rank hypocrisy. Walker told Hugh Hewitt that he wanted to "eradicate" ISIS and al-Qaeda, and that he’d do whatever it takes to rid the earth of those menaces. But as Friedersdorf says, this is boilerplate nonsense. "Would doing ‘whatever it takes’ include ordering an offensive that kills hundreds of Americans and costs hundreds more arms, legs and traumatic brain injuries? What if eradicating al-Qaeda and ISIS requires a multi-trillion-dollar increase in either taxes or the deficit?" Friedersdorf asks. And of course the answer to both of those questions is, pffft. Neither Walker nor any other candidate, Republican or Democrat, is going to actually undertake a World War II style all-out war to eradicate Al-Qaeda, because Americans won't support such a war unless there's actually some sort of credible threat to the American homeland, which, at the moment, there isn’t. Americans want tough talkers, but they don't want anyone who will actually follow through on the tough talk.

And so, we get candidates who are hypocrites. Scott Walker is a duplicitous slug and quite possibly a fool, and good for Friedersdorf for saying so. But the fact remains that, given the choice between a duplicitous slug and someone who would actually declare some sort of all-out war on Al-Qaeda, I, too, would take the duplicitous slug. Hypocrisy is bad; massive unnecessary wars are worse.

The problem is that the hypocrisy itself leads to unnecessary violence. When you tell the American people over and over again that we need to eradicate ISIS for reasons of safety or morality or world peace, they may start to believe you. You may even start to believe yourself. This sort of mass and self-hypnosis can lead to invading Iraq, and then regretting it at length. Utter hypocrisy is hard precisely because people hold you to your words—and because it's hard to just lie over and over without making yourself believe just a little bit. America needs politicians who will admit that, yes, in fact, it's not in America's security interests to bomb everyone we can, nor to treat the world as our own little police state. America doesn't have the will or the resources to exert absolute military control over the entire earth. Admitting that would help us formulate a more rational, less violent foreign policy.

But, unfortunately, Americans don't like to be told that there are some problems that can't be solved by dropping bombs. And so, politicians are left with a choice. They can unleash an endless apocalyptic war forever upon the planet. Or, alternatively, they can lie.

Walker, Friedersdorf says, has chosen to lie. Walker claims he'll be so much more hawkish than Obama that he'll eliminate terrorists everywhere. But he won't be. He's a hypocrite not a blood-crazed sociopath—or, at least he's a hypocrite when he says he's as much of a blood-crazed sociopath as Republican voters want him to pretend to be. So one cheer for hypocrisy, I guess. Maybe at some point the American public will stop equating strong leadership with heaps of dead bodies. But until that time, I'd rather have a hypocritical politician than a politician who actually delivers the American people all the war they claim to want.