Tucker Carlson and the Adults

Not a lounge act, a controversy. 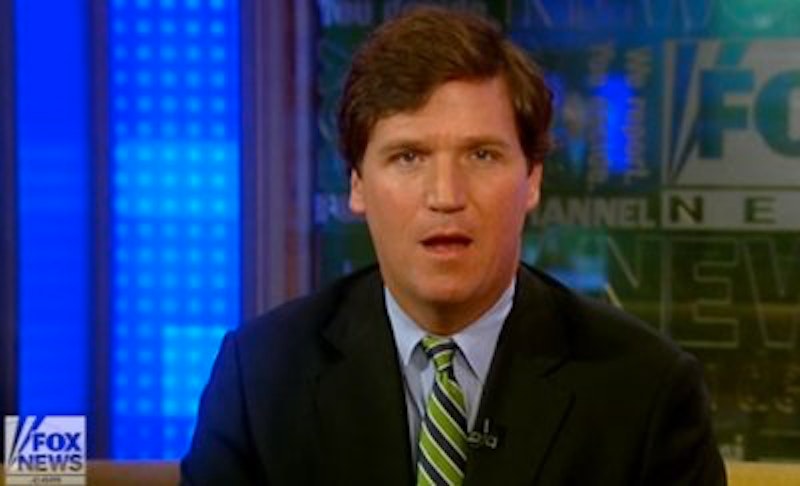 Here's a rule I didn't know about. It's a big one. In fact it's by way of being a semi-requirement for adulthood. A Washington Post blogger just threw the thing at the insolent head of Tucker Carlson. The blogger: “Outside of your peculiar bubble, adults generally don’t write snide tone-policing e-mails that drip with condescension, even when responding to requests for corrections that they consider bothersome or poorly worded.” Really? In my experience adults do get sarcastic on each other, and they display great interest in each others' behavior and how to correct same. I can't prove this to the blogger except to point to her blogpost, which dwells at length on Carlson's emailing choices and lashes him with... Well, she tries.

The blogger fished up her no-snide-emails rule because of a message that Carlson had sent to one of Mayor Bill De Blasio's people in New York. The aide wanted a correction in a story run by the Daily Caller, the wingnut news site of which Carlson is editor-in-chief. She pushed, and he wrote her this: “Thanks for your email. You believe our story was inaccurate and have demanded a correction. Totally fair. We are going over the transcript now.

“What [editor Christopher] Bedford complained about was your tone, which, I have to agree, was whiny and annoying, and I say that in the spirit of helpful correction rather than as a criticism. Outside of New York City, adults generally write polite, cheerful emails to one another, even when asking for corrections. Something to keep in mind the next time you communicate with people who don’t live on your island.”

The Post blogger can't imagine an adult writing this way. I can imagine plenty of adults doing it. All of them with varying degrees of success, all of them aiming at the same thing: the controlled dressing-down, whip-like division. You straighten somebody out and not a hair moves on your head. Victim dismissed, you turn to your ensign. “All right,” you say, “the Robby Mook profile. How's that coming?” All this is conveyed by the subdued crackle of your prose rhythms and the unruffled good cheer of your wording, except where casual bluntness underlines who's boss of the situation (“your tone, which, I have to agree, was whiny and annoying”). It's a cheesy genre; it aims low and it gratifies dull people. But it's been around. An adult—forgive me this rule—shouldn't stub her toe on this thing and be surprised it's there.

What got the Carlson business into the news was a different email, one by his brother. This one was obscene, a real frat-boy fart of wasted pixels, and it said nasty, demeaning things about the De Blasio aide. Being a chump, the brother clicked the wrong button and sent the email to its subject. The main Carlson was called on to apologize. He acted breezy. “I just talked to my brother about his response,” he said, “and he assures me he meant it in the nicest way.”

The Post blogger wrestles with this comment. “If this is 'nice,' then clearly some switch somewhere is flipped,” she writes. Well... yes. Here's the switch in question. Despite the evident meaning of their words, the Carlsons weren't actually saying the email was nice. They were saying that anybody who didn't like the email could fuck off. I don't think the blogger gets that. She runs through a list of “nice” things she has to say to the Carlsons: she nicely wants them eaten alive, and they're as nice as the middle seat on the airplane, and so on. “I mean this, as I said, in the nicest way,” she says, winding up. “So it is fine. It’s the thought that counts.” I don't think the boys are claiming cover behind good intentions. They are looking you in the eye and saying that turd they just handed you is really a diamond. You say it isn't? So what. Fuck you.

They bounce this message across by clever but not super-advanced use of unstated social realities. The other guy is angry, you smile like a champ: he’s being disregarded even as you pretend to respond. This old gambit zips past the blogger.  Like the rest of us, she has absorbed that the Carlsons are snotty pricks. But she can't process the verbal subterfuges by which snots carry out their prickiness.

Note that she's just 26 or 27 and that her blog is supposed to be funny. Sarcasm is a prime pastime of the young, or it was. News magazines ran worried articles about whether Generation X was about to overdose. Now the new America is here and we have a young humorist who is quite sure there's just one way adults talk to each other.

It's going to be a long century. On the other hand, Art Buchwald wasn't funny either.