What Exactly Is Gay Pride?

The thing about being gay is that coming out of the closet is a never-ending process. 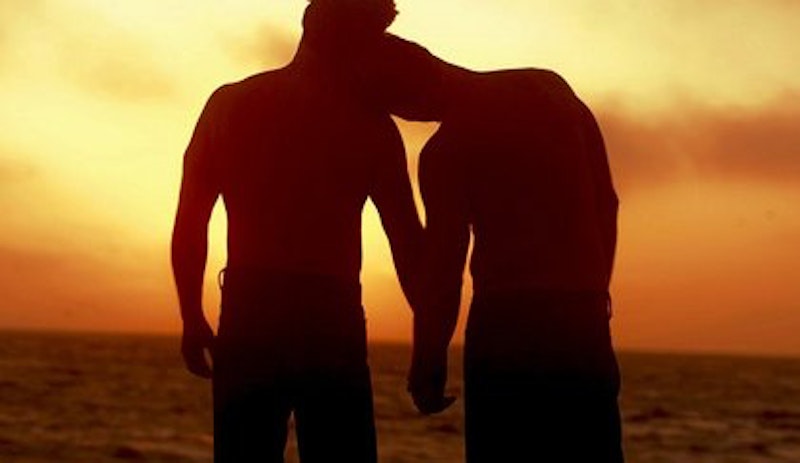 I’ll never understand what it is about the thought of two guys holding hands, making out, sucking each other’s hot dicks off, fucking, or just generally looking more fabulous than everybody that is offensive to the point of violence. People get so angry at the sight of gay dudes that they splash acid in their faces, something that happened outside a South London gay club this month. Or shoot them point blank, which happened this time last year in NYC’s West Village neighborhood. If you see something that isn’t to your liking that’s fine, but there’s no need to beat someone to a pulp because you disagree with their lifestyle.

Throughout the months of June, July and August, Gay Pride festivals will be unveiled all around the world. New York, Paris and London are just three cities holding Pride parades and festivals. But the question I have is what are we celebrating, exactly? Is it a time for thinking about how much queer progress has been made and where we have left to go? Or is it actually about social recognition?

Gay Pride is a number of things. It’s a “safe space.” It’s corporate sponsorship opportunities. It’s tourism dollars. And it’s a chance to travel to a new location, usually a big city, slide your booty into that one-sided mankini, dive into some glitter, drink lots of alcohol with friends, party, and have sex with as many strangers as possible. There’s nothing wrong with any of this if that’s what you’re into, especially because a lot of people who go to the big gay prides in Philadelphia, Chicago, San Francisco, Los Angeles, London, New York and on and on are actually not from those cities but from smaller towns, and this is a chance to let their gay out.

So gay pride does do a political thing. But part of me wishes there was a way to wed the celebration and debauchery with the real, day-to-day struggles of not just being gay but of living a gay life everyday, not just during Gay Pride.

The first time I had a boyfriend in New York we walked around the city holding hands, as most couples do. I was so excited to have a boyfriend and to hold his hand in public, but we got harassed so many times. All over the city, too—in the Financial District, Chelsea and Midtown. I thought New York was supposed to be a place where gay people were unconditionally accepted, where we could be gay not just during Gay Pride but every single day of the week? I thought big cities were safe spaces where gay people escaped to live a fabulous life?

“It’s Adam and Eve not Adam and Steve,” intelligent and profoundly original homophobes screamed at us. Less verbal people burst straight through our handholding on the sidewalk, using their bodies to convey disapproval. Even now I am afraid to hold a boyfriend’s hand on public transportation or elsewhere in public out of fear of something happening to either of us. That’s why I always stare at gay couples when I see them holding hands. How romantic and cute, but also how brave. I wonder what it’s like for them, wonder if they were showered with homophobic insults and jabs moments before I crossed their path.

One of the problems with Gay Pride is the myth that there’s such a thing as a “safe space.” The thing about being gay is that coming out of the closet is a never-ending process. No matter how out you are you’ll still have to come out again-and-again in different contexts over the course of a lifetime. On nearly every college campus in America there are pink triangular stickers stuck on professors doors advertising the room as a “safe space,” identifying the professor as either gay or as an ally. This is a great idea for young college students, many who may indeed be struggling with their sexual identities or in search of someone to talk to. But the unfortunate reality is that there is no such thing as a safe space. Cities aren’t necessarily safer for gay people, neither are gayborhoods, gay clubs or the spaces around gay venues. They’re targets as much as they are safe spaces.

So what, then, is Gay Pride?

No matter how much “progress” is made, gay people still have to live and survive in the heterosexual matrix. We need to show people that being gay is amazing but that there are still a bunch of poorly-dressed assholes out there with dead ends who can’t handle it. Enough about Pride, what do we do when someone assaults us, especially when we can’t count on the police? I’m sick of reading about gay men and women being the prey of misguided homophobes.