How do I know? The New Republic told me so. 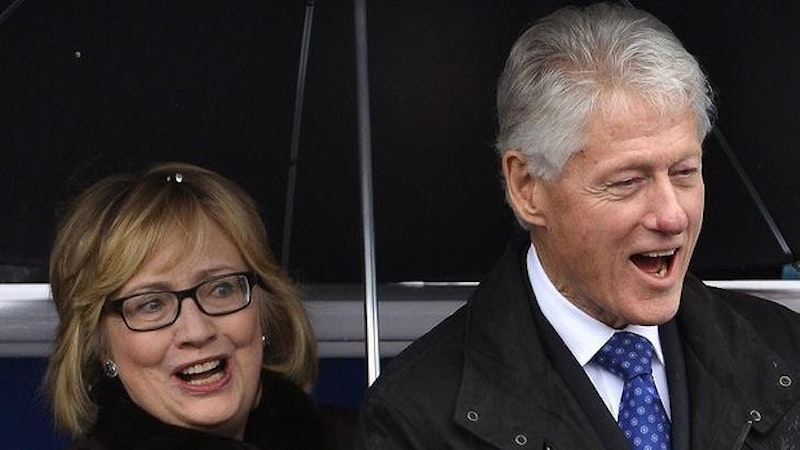 Noam Scheiber is remarkably prescient. In his July 14 New Republic cover story he—get ready to change your drawers!—predicts that Hillary Clinton will be the Democrats’ 2016 nominee and, a touch more tentatively, win the presidency. I haven’t read this before, have you? Golly, I was under the misguided assumption that Vice President Joe Biden or Maryland’s governor Martin O’Malley had it in the bag. It’s my good fortune that I still subscribe to The New Republic so that my ill-informed opinions can be dashed and corrected by a wise senior editor at an Inside-the-Beltway sort-of-biweekly that has lots of big graphics but hardly any advertisements. If only I could worm my way into that bubble!

An attractive picture of Hillary, rather sporting since so many mean-spirited snaps of the 66-year-old have appeared digitally, dominates TNR’s cover. The headline reads, “Inevitable,” and then, for Scheiber’s ground-breaking punditry—he did the heavy lifting by talking to a homespun Iowa precinct captain who grunt-worked for Obama in 2008; a “former Obama staffer”; Hillary’s former campaign strategist Geoff Garin; and, my favorite, Ilya Sheyman, head of the “liberal” (talk about a wolf in sheep’s clothing) MoveOn.org. I only read the story twice, so perhaps I missed all the quotes from Republicans who may or may not agree with Scheiber’s stupendously original thesis.

I’ve no idea when Scheiber actually wrote his story—lead-time and all—but could be the polls he cites with stratospheric numbers for Hillary might’ve dipped after her tone-deaf “We [she and the husband] were 'dead broke' upon leaving the White House." Never mind that both of them, after living off government largesse since the late 1970s, not long after graduating from elite universities, and having rich friends as well as the attendant no-need-for-money that the White House affords, hit the jackpot with book sales, speeches and other money-grubbing exercises starting in 2001. She is, as the newly popular appellation says, a “Hillionaire.” Scheiber cites a Wall Street Journal poll that showed 75 percent of respondents agreeing that Hillary’s “honest and straightforward.” Last Friday, WSJ columnist Peggy Noonan shared a more recent Journal/NBC poll that reported her “honest and straightforward” report card had slipped under 50 percent.

No matter: polls are ephemeral, and if Scheiber says Hillary’s the Donkey Dreamboat, it must be true. Really, on July 2, 2014, it’s only two-plus years until the general election! Nothing could derail the inevitability: not some very weird midterm election results; and unlike the Ted Cruz types, I doubt Benghazi will hurt Hillary—too long ago, and already forgotten by the electorate; and if another dossier of incompetence on her watch as Secretary of State is revealed, well, that’s foreign stuff that no one cares about. And, if ill fortune strikes, such as a bout of bad health to either the husband or Hillary, that can be turned into a positive by 54 spinners who draw checks from a $1 billion or more campaign kitty. Pocket change.

Scheiber does give lip service to the populist hope of apparently very few Democrats, at least according to him, Sen. Elizabeth Warren, but claims the left wing has made peace with the prospect of eight years of Hillary, no matter how closely she’s tied to Wall Street, corporations and those handy—when it comes to dialing for dollars—one-percenters.

He concludes: “[I]n the end, the idea that progressives can dramatically influence Clinton’s economic team [once she’s elected] is only slightly less a stretch than believing they can oust her in the primary. Clinton will find a way to appoint most of the people she wants to appoint, and to pursue the agenda she wants to pursue. That, after all, is what many liberals now find so appealing about her. They just shouldn’t be surprised when a candidate who excels at working the system ends up working them, too.”

Oh, you sly, sly dog, Mr. Scheiber. After all that ass-kissing, throwing in a last line to prove that you’re a hard-bitten, take-no-sides, gutsy journalist who has a laptop/smart phone that’ll travel!

As for me, a Baltimorean rube, after all, I’m not convinced Hillary will even run. She might do a Mario Cuomo, circa ’88 and ’92, and say, in glossier words, that she’s beat, exhausted—and, to be fair, who wouldn’t be after her non-stop traveling, sucking up to donors for money and keeping track of the husband—and will take a pass. Also, I found it odd that Scheiber didn’t even consider—in fact, didn’t even mention—the possibility that the Hillionaire might lose to a Republican, say Marco Rubio, Rand Paul or Scott Walker, in the general election. Fuck it, who has time for bothersome details.