A Humanist Struggles With Nonviolence

Remembering the lessons of James Baldwin. 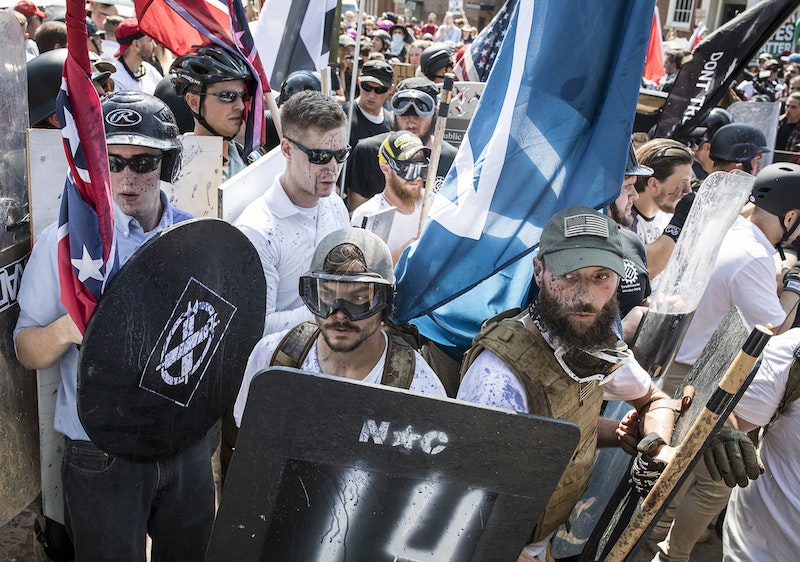 If you told me we’d spend more time in 2017 debating whether or not we should punch Nazis than talking about ways to resist the Trump regime, I’d have thought you were pulling my leg. But unfortunately, while Trump continues to make America a flaming bag of shit, we’re spending all our energy attacking one another on social media about the ethics of Nazi punching. I tried to stay out of the debate because I’m too busy worrying about my safety as a queer trans person living in Trump’s America to shed tears over Richard Spencer’s black eye. And yet I understand why punching Nazis is such a hot topic; it brings up the old debate about when and if violence is ever justified.

I’ve always been a bit of a hippie, so I sided with nonviolence. Growing up in Prince George’s County, MD, which is predominantly African-American, teachers taught me about Dr. Martin Luther King, Jr. and how much he accomplished with nonviolent resistance. Later on in life I learned about Mahatma Gandhi and the anti-Vietnam war movement, which confirmed my theory that nonviolence was the only answer. They also taught me about the Revolutionary War and World War II, but I couldn’t help seeing war as just a contest over who could kill the most people.

Then I got older and learned things aren’t that simple. For example, the LGBTQ rights movement didn’t begin with Marsha P. Johnson and Sylvia Rivera staging a peaceful sit-in protest. On that hot June night, they fought back against the police who were constantly beating them up and throwing them in jail just for being who they were. I also knew more about Malcolm X. He didn’t reject nonviolence because he was pro-murder; he was pro-self-defense. Even King couldn’t outright condemn the riots of the 1960s because “a riot is the language of the unheard.”  I began to realize that while nonviolence is optimal, it wouldn’t save me if someone’s trying to assault me.

And then came the Nazi punch heard around the world. You’d think that seeing white supremacist Richard Spencer getting clocked would make liberals cheer, but instead came a social media debate about free speech and violence. I agree that we can’t go around punching everyone with objectionable opinions. Despite being critical of the neo-classical liberal movement, I still believe in fighting abominable speech with better speech. We saw this work last weekend in Boston where tens of thousands of people showed up at a Free Speech Rally to condemn racism. Charlottesville should be a wake-up call that the Alt-Right is nothing more than a white supremacist hate group. We didn’t defeat the Nazis in World War II with good arguments; we fought them. So what’s a progressive secular humanist like me to do?

I recently found an old recording on YouTube of James Baldwin—one of my humanist heroes—speaking at an inner-city high school in the 1960s. During the Q&A, a young man asked him what he thought about King and the nonviolent movement in the South. Baldwin began by saying how much he admired King, and how he was against violence. However, he then added this caveat:

The technique of nonviolence has obvious limits. It has this limit: that people are not by nature nonviolent. And it would cost you, if you were down there now, a terrible effort from which you might not recover. You would have to endure what you would have to endure at the hands of those people. Therefore, your question, to be honest with you, finds me very much where you are. I think the entire strategy has got to be rethought in order to minimize the damage to you. I have not yet come up with a satisfactory answer, but I would do my best. And you think about it, too, okay?

And to me, that's the crux over the debate about punching Nazis. I'm against violence, but we don’t live in a nonviolent world. The systems of oppression are not nonviolent. And, unfortunately, like Baldwin, I don't have an answer.