Trying by phone to persuade Iowans to vote for Vermont’s senator is tough sledding. 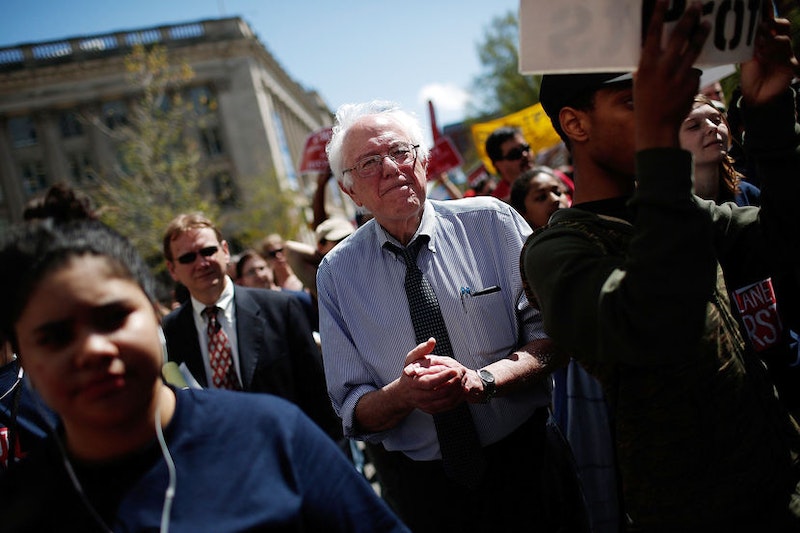 I’m not a diehard Bernie Sanders supporter, but the other candidates in both parties terrify me. Martin O’Malley is harmless, but he comes off as an automaton. What’s appealing about Sanders is his honesty. And anyone who pledges to make college free or at least more affordable (and hasn’t recently made up their mind about it) is worth voting for. I find Hillary Clinton cold and, more disturbingly, paid off by corporations.

After watching Saturday night’s Democratic debate and getting pissed off by the hokey Star Wars reference, probably paid for by JJ Abrams, who’s given $1 million to PACs that support Clinton, I decided to follow through with my RSVP to a Sanders phone bank event. On Sunday afternoon in Baltimore’s Canton neighborhood, my boyfriend and I joined a few other volunteers to call people in Iowa about the February 1st caucus. Connecting my iPhone to the dialer system, my enthusiasm faded. It took a while to get the poorly-designed system working, and when I finally got through to an Iowan, my heart sank. Shakily reading from the script, I introduced myself and went on to give a monologue about Sanders that was too long. I asked, “When you caucus on Feb 1st, can Bernie Sanders count on your support?” The reply: “Sorry, I’m for Hillary all the way.” Quickly, I responded with a “Thanks for your time, have a good day!” and re-wrote the script. Another person said, “He belongs in a nursing home! He’s too old!”

The next few politely told me they supported Hillary, weakening my resolve with each “No, sorry.” I was ready to call it a day until a cheerful young woman said she was voting for Sanders. She added that she’d be happy to volunteer sometime, but now had to get back to her little girl’s birthday party. She was the only Sanders partisan I spoke with. Other responses included, “Before you go any further, I’m voting for Trump,” and “I don’t believe in this crap!” Many were undecided and some were Republicans. My boyfriend’s face turned white while he spoke to one man who asked, “Are you sexy? My neighbor thinks you’re sexy.”

After a pleasant five-minute conversation with a sweet older lady who was “glad young people are getting interested in politics,” and told me to “just keep it up,” I exited the dialer system and closed my laptop. Still unintentionally speaking in my phone-voice, I thanked the other volunteers for organizing the event. The woman who’d given us a “Billionaires Can’t Buy Bernie” bumper sticker told me not to be upset, that it was important to have people associate Sanders with a pleasant voice.

I left that day with a greater appreciation for Sanders and his campaign. He’s up against Hillary Inc. and it’s going to take a lot to override her name recognition. Even after speaking to many unpleasant Iowans, I’d be willing to give it another go.