We’re Having a Party with Hillary and Joe 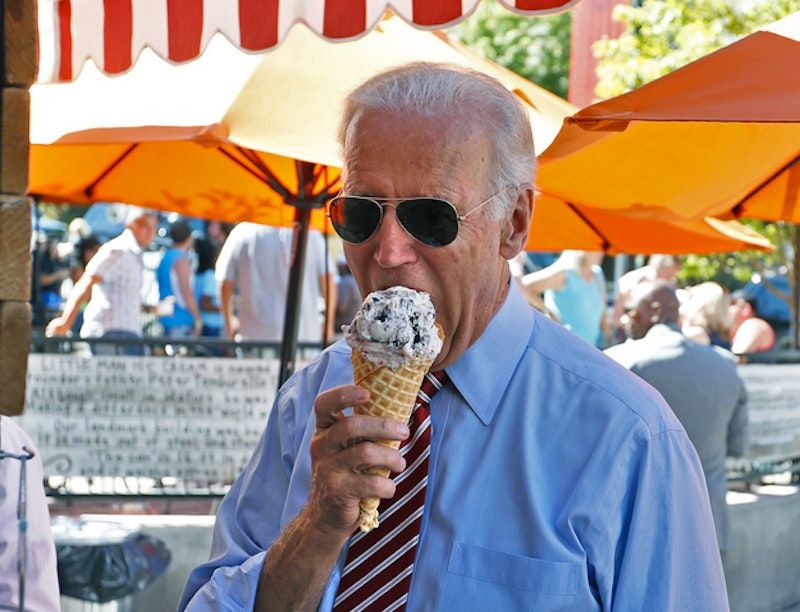 It’s been a spell since I last checked in on DNC errand journalist Michael Tomasky—once, before digital, a more or less respected political writer—at The Daily Beast, since, really, if masochism’s your bag, why not just go straight to the shameless Paul Begala? Nevertheless, Tomasky’s latest article/advertisement for Hillary Clinton was a pretty fun read. Headlined “Hillary vs. Biden Would Get Ugly Fast,” Tomasky offered no concrete evidence that the Vice President will challenge Clinton—not his fault, Amtrak Joe is either just screwing around with the media or legitimately deciding whether or not his past failures in presidential politics rule him out—but did lay out a juicy scenario for a bruising Democratic primary if the speculation comes to pass. Anyone with more than a passing interest in politics is rooting for such a squabble, if only for the relief it’d provide from the relentless coverage of Donald Trump’s crazy campaign.

Along the way, Tomasky lays down a revisionist history of the 2008 Democratic race, saying that once Barack Obama got in, he bested HRC’s “first woman president” card, and then moved into the White House. He writes: “Obama had the larger and more morally urgent historical claim to make in the minds of most Democrats and liberals. The woman would have to wait, as women so often do.” He doesn’t mention Jesse Jackson’s surprisingly robust ’88 campaign against Michael Dukakis; in Tomasky’s mindset, wasn’t the election of Jackson as the first black president—20 years earlier!—“morally urgent?” Oh Christ—excuse me, Evangelicals—I’m getting mired in details! Anyway, it’s not like the ’08 Hillary-Barack campaign was rancor-free: for one, Obama was superb on the stump (and since he essentially announced his intentions after his speech at the ’04 Democratic Convention, he had a lot of prep time) and just as adept as the Clinton Machine at raising money. Two, Bill Clinton’s race-baiting in South Carolina was priceless: the first “black” (and gay, and trans, and female, and hillbilly) president doing Obama dirty in a crucial primary. And Hillary’s crocodile tears in New Hampshire, which got her back in the race after losing to Obama in Iowa, was the stuff of sleazy political legend.

But what’s done is done. Tomasky has a nifty hypothetical “sub rosa” line from Biden and his campaign (after acknowledging that Hillary and Biden aren’t much different on issues): “I’m a stronger and safer nominee because she’s corrupt.” Man, if Biden did run on that theme, wouldn’t it be a gas? It’s true, of course—Hillary’s hypocrisy about income inequality, favors to UBS, the email controversy, and accepting money from foreign donors whose countries treat women like dogs—and he could even be honest, saying, “Some might call me a hack, but I’m not a crook!”

I don’t buy Tomasky’s theoretical equivalence of emotional heartstrings: Hillary’s gender vs. the recent premature death of Biden’s son Beau, but I do agree it’s conceivable that could be a brutal theme. And I don’t see Tomasky’s reasoning that the media wants Hillary to lose—to whom: Cruz, Rubio, Kasich?—and will plump up Biden because they like the white 72-year-old. Doesn’t the media pounce on every single one of Biden’s gaffes? Isn’t he sort of a pet laughingstock (even if a Democrat) for reporters?

Tomasky ends his short article wondering how Obama would react to such a contest. His assumption is that the President would be circumspect, professing, fingers crossed behind back, that he admires and respects both candidates, and it’s up to the primary voters to decide. And by the way, God bless America! It’s just my guess—but we’re in a checkers game here—that Obama would (figuratively) fuck Hillary at the first glimpse that her campaign was in trouble, if only to pay back her wandering husband.