I Tried For a Week to Hate Ben Shapiro

And now I'll miss his podcast. 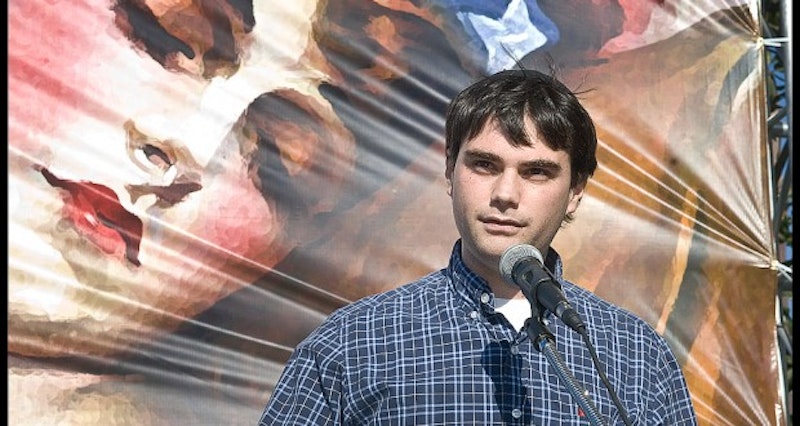 It’s easy to get sucked into the echo chamber trap of opinionated cable "news" shows. People watch Fox News or MSNBC to get their biases confirmed. I can understand this approach. It's more comfortable, and who really wants to be challenged after a hard day at work dealing with passive aggressive co-workers and a toxic boss?

The result is hordes of "replicants" endlessly repeating the same clichés. "Benghazi" this and "Islamophobic" that. I went cold turkey on TV news shows two years ago, and never looked back. Nowadays I stick to print newspapers, podcasts and the Internet, and it's a big improvement. I don't like getting force-fed like I do with TV.

I try to expose myself to the "other side" on a daily basis. The first thing I've done online for years is to check the right-wing Drudge Report. That, for one thing, keeps me up-to-date on all of the black-on-white crime in the U.S. that Drudge loves reporting on. Last week I decided to add a right-wing podcast to my routine, and ended up picking conservative firebrand Ben Shapiro's show. Shapiro is so conservative that he thinks Sesame Street is an example of left-wing propaganda. He can be a horribly annoying, smug, Young Republican type. The kind who would bug you about free markets at a backyard barbeque when you just wanted to talk sports.

The first issue I heard Shapiro address on his podcast was the recent frenzy surrounding the New York Times hit piece on Amazon. Most conservatives and libertarians don’t see this as an issue, and Shapiro is no exception. He argues that, while he personally would not want to work there, people can leave at will. Certainly a valid point of view, though it fails to take into account Amazon's warehouse employees, who feel the brunt of Amazon's Darwinian workplace approach, while having far fewer options than their white-collar counterparts. When working conditions are sending people to the hospital, I'd argue that the Amazon culture is toxic.

Moving on to the topic of the hypersensitivity on today's college campuses, Shapiro bemoaned the fact that free expression is being stifled at the very place where it should be fostered. Discussing "micro aggressions," he argued that simple, innocuous mistakes are being mislabeled as "aggressions," thus distorting the magnitude of the situation. Absolutely no argument from me on this one, as I think the on-campus coddling and "safe place" mentality is ludicrous and fails to prepare students for real life. You need to get a handle on your "triggers" eventually, and the post-college environment offers no "safe spaces."

Then Shapiro mentioned that his well-publicized, televised donnybrook with transgender Inside Edition reporter Zoey Tur was one such example of an innocuous "mistake," which is disingenuous. Asking Tur, "What are your genetics, sir?" was a calculated provocation, and it diminishes Shapiro to claim otherwise. Also, when you have a face as punchable as Shapiro's already is, it might be wiser to choose weaker targets than Tur to taunt.

Gays weigh heavily on the mind of Ben Shapiro. After listening to a week's worth of his podcasts, I'd say he's obsessed with them. He's tilting at windmills at this point. It is today's permissive attitude towards gays that is turning more and more young people into homosexuals, says Ben, claiming that the genetic component of homosexuality is greatly exaggerated. Shapiro cites a recent YouGov UK poll, which indicates that that nearly half of 18-24-year-olds in the UK are not fully heterosexual. I'm not sure what conclusions you can draw from one poll, but what Ben wants is for things to return to the time when conservative values ruled, and gays were forced to be in the closet.

I found myself in agreement with Shapiro on only one of the many gay-oriented themes he explores so often. He spoke out against labeling bakers who won't bake a cake for a gay wedding as "persecution" of gays, and he's right. Persecution is too strong a word in this case, though I don't condone such narrow-minded behavior. Persecution would be if all bakers colluded to exclude gays as customers.

I figured I'd hate Shapiro after listening to him for a full week even more than I already did, but somehow that didn't happen. Love him or hate him, he offers a reasoned analysis to most issues, unlike a Rush Limbaugh, who just demagogues everything for his sycophantic listeners. Shapiro is a Harvard-trained lawyer, and he possesses the intellect to make himself interesting even to those who oppose his politics.

Maybe it was the podcast format that made Shapiro bearable. In a panel discussion his smirking persona takes over and I'd probably hope for him to get really punched this time. As it happens, his podcast ends this week, and I can't believe this, but I'll miss it.